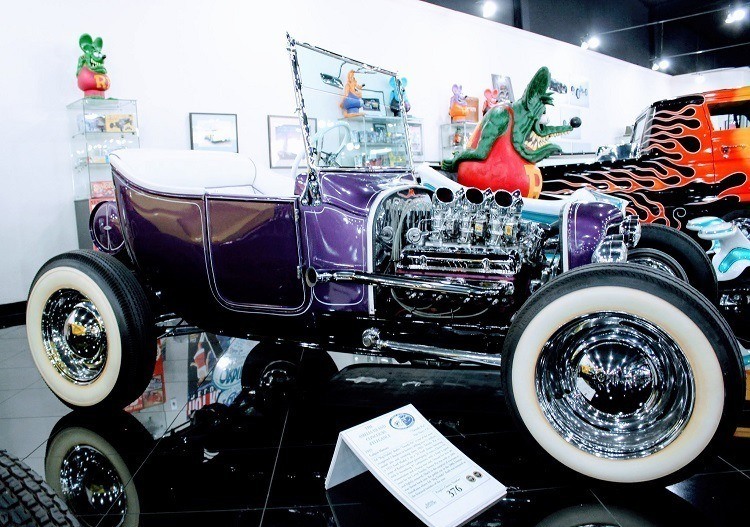 This past weekend I was in SoCal and among other T-Bucket activities took in the 7th Annual Galpin Car Show, one of the biggest shows in the San Fernando Valley. The show is pretty awesome with not only rods and customs, but tons of exotics, Shelbys galore and a huge variety of modified VWs. But what really got my blood flowing was the awesome display of T-Bucket hot rods in the Galpin Auto Sports Museum.

As one of the world’s largest Ford dealers it’s only logical the Galpin Auto Sports Museum would feature some historic T-Bucket hot rods and they had it covered quite well. 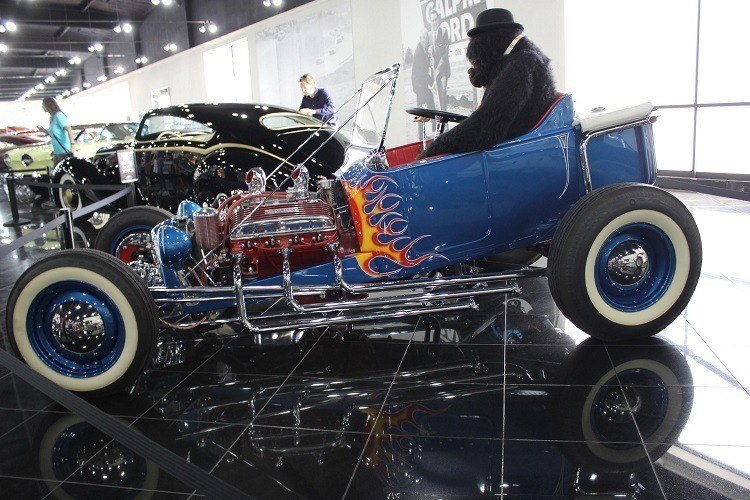 While Fred Thompson’s Kookie Kar clone normally resides at the NHRA Museum in Pomona, it was on loan to Galpin Auto Sports for the car show. This particular tribute to Norm Grabowski’s genius was built by Johnnie Overbay at Reno Rod & Custom Supply in Oklahoma City.

And when it comes to legendary T-Bucket hot rods Bob Johnston’s Tweedy Pie, which was later owned by Ed “Big Daddy” Roth, is at the top of the list. After Roth bought it and updated it a bit it became a model car kit that has sold over 11 million copies. 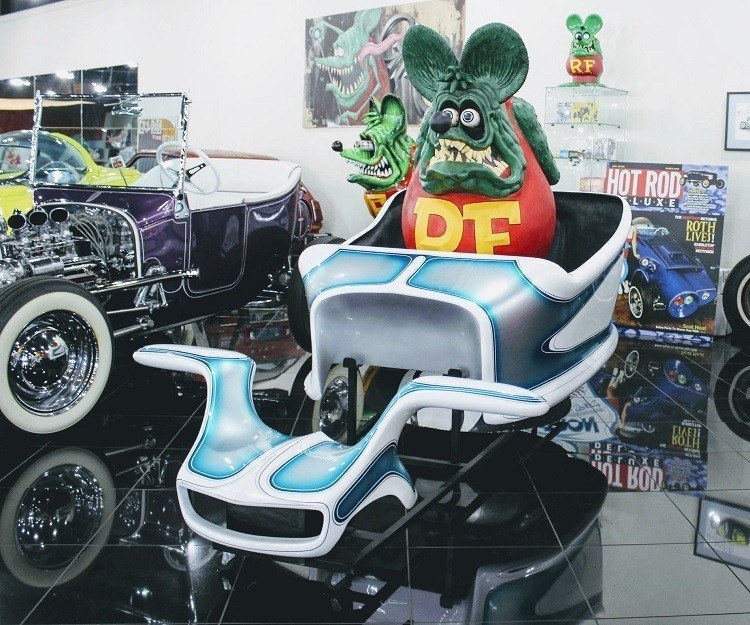 Speaking of Ed Roth, the Galpin Auto Sports Museum has perhaps the world’s largest collection of Big Daddy Roth vehicles and the trip is worth seeing that alone. And while you won’t see Ed Roth’s T-Bucket inspired Outlaw, you’ll be able to take in the next best thing: a perfectly painted Outlaw body and grille shell. As you may know, Big Daddy made a mold from the original Outlaw and sold a few fiberglass bodies from it. 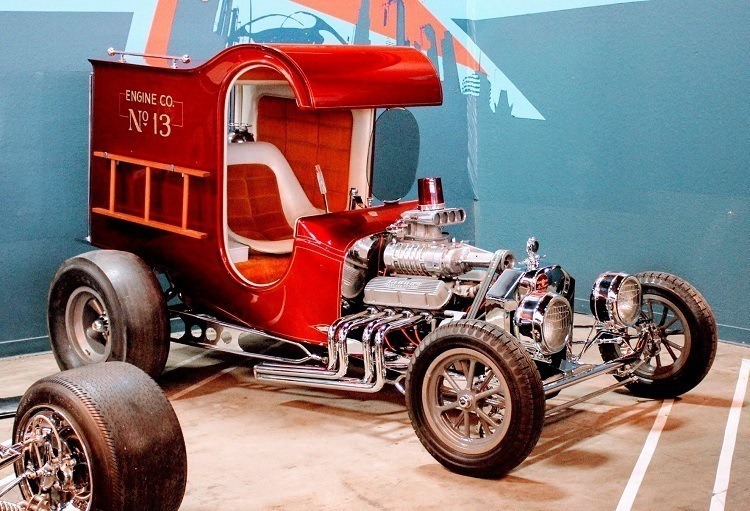 And you’ll love seeing Chuck Miller’s Fire Truck C-Cab that was his personal T-Bucket he built in 1967 and then converted to the beautiful C-cab that won the prestigious Ridler Award at the 1968 Detroit Autorama.

One of the other more notable television T’s was the Munster Koach, which was built in 1964 for the popular series. Although widely credited as a George Barris creation, the three fiberglass T bodies on a superstretched frame was a concept that was originally created and fabricated by Tex Collins who owned T-Bucket fiberglass body manufacturers Ford Duplicators and Cal Automotive. 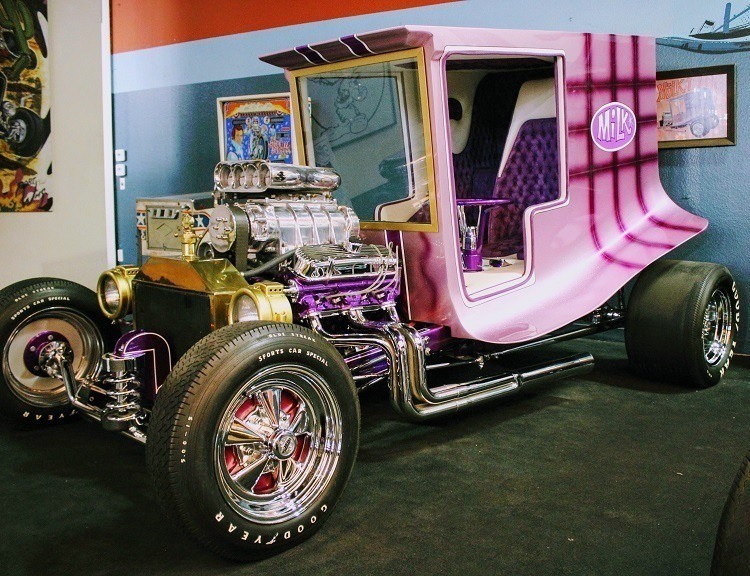 While still in high school in 1964, Dan Woods created the stunning show-winning Milk Truck C-Cab which is on display at the Galpin Auto Sports Museum as part of a Dan Woods C-Cab extravaganza. This car is very notable because it brought about a trade of cars that  inspired the hot rod world for decades after. Bob Reisner loved the Milk Truck so much that he traded Dan his beautiful 1915 T-Bucket for it and the Milk Truck became the basis for Bob’s long line of unique California Show Cars that toured the country. Dan Woods drove that sectioned T-Bucket for many years and it inspired his many T-Bucket creations that came out of his Contemporary Carriage Works shop. 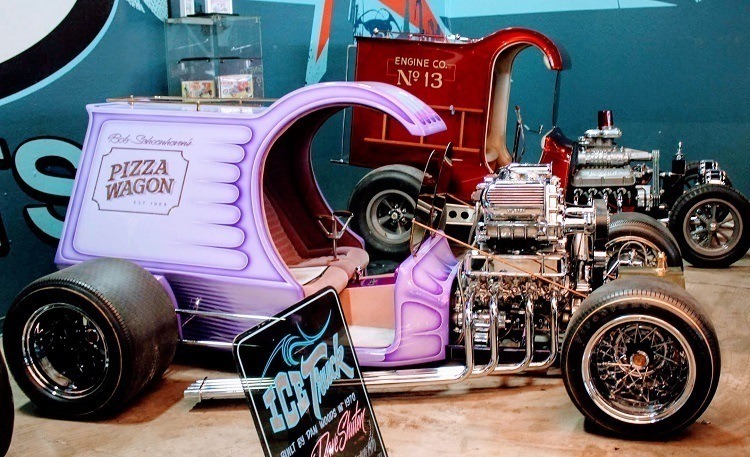 The second entry in the Dan Woods C-Cab triad is the Pizza Wagon, which Dan built in 1969 with car show promoter Bob Schoonhoven. 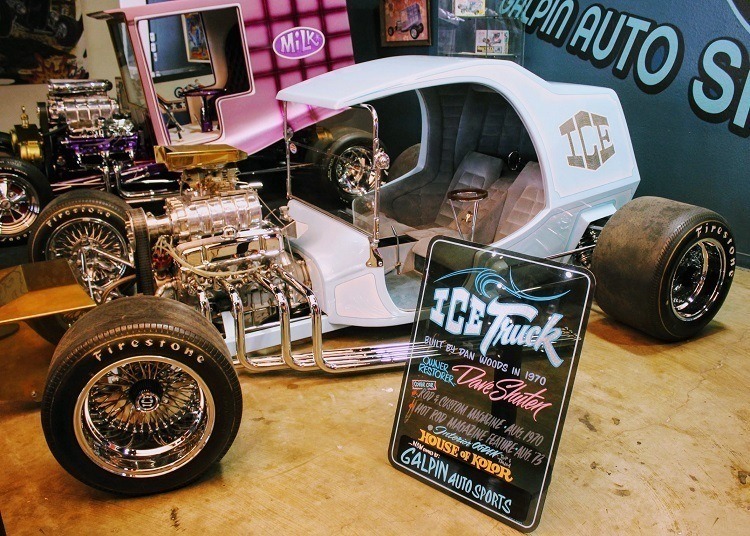 Rounding out the Woods display, in 1970, Dan Woods built the Ice Truck C-Cab which was found years later in less than great shape and restored to its original luster by Dave Shuten, who heads the Galpin Speed Shop division.

The Galpin Auto Sports Museum just off the 405 freeway in Van Nuys and the award-winning Galpin Horseless Carriage Restaurant is just across the street. In 1966, Galpin was the first and only automotive dealership in the country to offer its customers a full-service restaurant on the premises. If you’re a lover of T hot rods or custom culture the Galpin Auto Sports Museum is a “must” stop on your next L.A. visit.