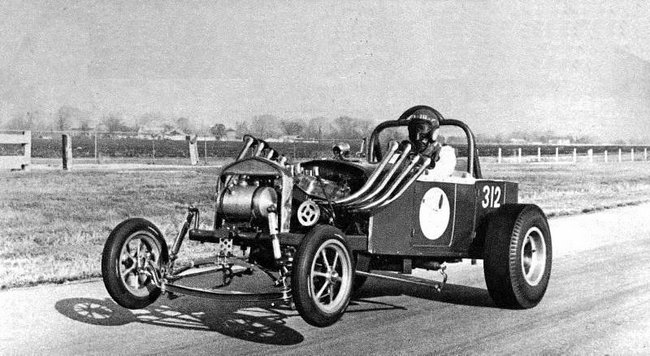 Not only am I a T-Bucket lover, but also a Y-Block Ford lover! So, the June, 1963 cover of “Rodding & Restyling” magazine featured an interesting variant of the T-Bucket style: a 1927 T phaeton body abbreviated by chopping off everything behind the front doors and with a grafted on pickup bed of sorts. What really caught my attention, though, was that it was Y-block Ford powered. I had become a big fan of the Y-Block Ford underdog engine and loved nothing more at the time than seeing a small block Chevy get a rude awakening at the local 1/8 mile strip from one of these torquey, distinctive sounding mills.

So please indulge me for a bit, while I share just a few of the Western Kentucky Y-Block powered cars that I followed at the local drag strips.

Above are just a few of the local Y-Block powered cars that fueled my early years inspiration. St. Louis area hot rodder Ted Kramer had built up a venerable 312 Y-Block Ford and put six Strombergs on top and with a magneto dependably firing off the combustion gases he produced quite a competitive B/Roadster. Two years later, the June, 1965, “Hot Rod” featured three full pages on Ted’s “Snoopy: Speedy Stripster” and I was blown away by how Ted’s never-ending quest for a low E.T. had turned this into one of the coolest competition T-Buckets I had ever seen. The Stromberg carbs had been ditched in favor of one of the few sets of Hilborn injectors produced for the Y-Block Ford engine. And to complement that, the lakes type headers had been replaced by what Hot Rod termed a “trumpeter’s nightmare”. Oh, how I wish I had been able to hear that snarling, popping Y-Block Ford through those eight zoomie pipes with their bell tip amplification of the sound! And, the wheels up start picture was one of the best Hot Rod had ever run to accompany a feature car story! According to the story, Ted originally built the car for both street and strip use and that was evident in the Rodding & Restyling photos which showed its headlights, windshield, radiator, full interior and other street equipment. Ted also proudly displayed an exclusive L.A. Roadsters club plaque on the car.

Ted went on to build some very competitive inliner powered T-Bucket altereds which were quite successful in NHRA competition. In fact, Ted also had a Y-Block Ford powered T-Bucket street rod. But, still today I can say “I love this car!” It screams hot rod and has been a very strong influence in terms of my own T-Bucket project.