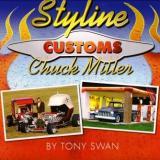 You may be familiar with the name Chuck Miller from our recent post about the “Red Baron” T-Bucket he built, or maybe you were around back in 1969 when Chuck’s Red Baron was the Sweepstakes Winner at the famed Oakland Roadster Show. Maybe you remember Chuck Miller winning the prestigious Ridler Award at the 1968 Detroit Autorama with The Fire Truck C-cab T, which was also recognized by Car Craft magazine as one of its “10 Best Rods ‘N Rails of ’68”. Possibly, as a kid you built one of the popular big V8-engined Zingers models, like those Chuck built for the show car circuit. More recently, you may know Chuck from his inductions into the Kustom Kemps of America (KKOA) Hall of Fame or the Darryl Starbird Hall of Fame. Or, maybe you read that Chuck Miller received the coveted Builder of the Year Award at the 2010 Detroit Autorama. You could write a book about Chuck’s accomplishments, exploits and contributions to the world of hot rods and customs — and, fortunately, somebody has. “Styline Customs Chuck Miller”, written by Car and Driver senior editor, Tony Swan, captures Chuck’s creative successes in the world of custom cars, starting with his first customized model car winning the first model contest he entered and quickly moving to how he fashioned his first real car, a $35 1950 Ford, into a stylish custom that was photographed by the famed Alexander Brothers and appeared in Rodding and Re-Styling magazine the year he graduated high school. Speaking of high school, you T-Bucket fans will recognize Chuck’s early talents from the study hall sketch above that he created. You’ll also be fascinated to learn how in 1967 Chuck built his first T-Bucket (above), based on a Cal Automotive fiberglass body, drove it all Summer and on the day after Thanksgiving applied his creative talents into converting it into a hand-fabricated C-Cab in 8 weeks and walking off with the Ridler Award when The Fire Truck was introduced at the Detroit Autorama. In keeping with Chuck’s meticulous, high standards, this is a beautiful oversize book with 135 pages filled with lots of color, and a few nostalgic black and white, photos from Chuck’s personal archives. Author Tony Swan does an excellent job capturing the story of a hard-working hot rod “artist” who worked equally well with a spray gun or a hammer and dolly. Chuck’s many friends, coworkers and collaborators are also given special attention because of the lifelong bonds they’ve developed as a result of Chuck’s many talents. I thoroughly enjoyed reading this book and find myself picking it back up over and over to review photos and stories.

You can get your own copy of this great book by sending a check or money order for $47.00 to Chuck Miller Studios, P.O. Box 99, New Boston, MI 48164. The cost includes domestic packaging and shipping — and if you ask, Chuck will personally autograph your copy.

(If you’re a collector, you may want to order the limited edition version. Only 100 copies were produced with a gray leatherette binding and the book comes in a brushed stainless steel slipcase that is laser engraved, along with photo, business card, lapel pin, ink pen, etc. A few numbered editions are still available and the price is $127, plus shipping. For more information, email millerckpl@gmail.com)

–> In the interest of full disclosure, I purchased my own copy of this book at the full $47 price and was happy that I did.