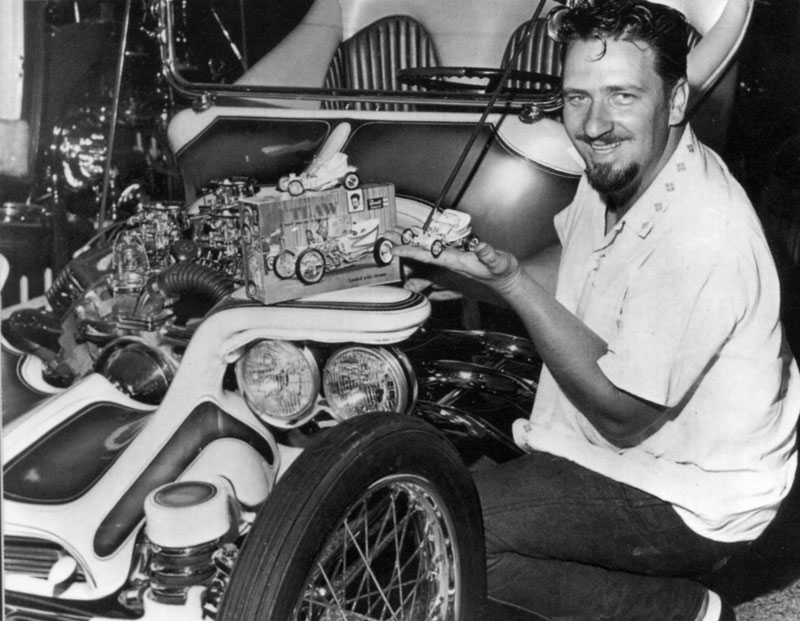 Note: To honor the memory of the late Ed Roth, I am reposting (with a new image gallery) this brief tribute from 2010.


Nine years ago (April 4, 2001), we lost Ed “Big Daddy” Roth. I felt fortunate that two months prior I had a chance to say hi to Ed and get him to autograph a couple of T-shirts at the Chicago World of Wheels car show. Growing up, Ed’s T-Bucket inspired fiberglass creation also had a tremendous influence in my hot rod aesthetic. In tribute, I’ve put together a brief video on that monumental hot rod, including some of the recreations of the Outlaw as well.

(04/25/10 UPDATE) I just learned that the Outlaw body and grille shell moulds are For Sale with exclusive license rights! To my knowledge they really haven’t sold hardly any since the Jimmy C refurbishment of the original moulds was undertaken. And, they were supposed to be in full production in 2002.
I guess the big question is just how many Outlaw clones does the world want? And, if you’re using an Outlaw body and not building a clone it’s just going to be an odd-looking takeoff on a T-Bucket. I’m a huge Outlaw lover and it will be interesting to see how this plays out.

I wanted to add a gallery of some of the photos I’ve taken of Ed Roth’s legendary hot rod on display at the Petersen Museum. Enjoy the work of a master.

If you want to see the techniques Ed used to create his unique custom fiberglass bodies or are inspired by Ed’s work to build your own rod body, then check out the DVD on Build a Fiberglass Body at Home.