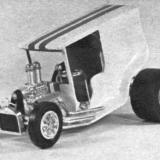 As observed by Pat Ganahl in his book, “American Custom Car”, Dan Woods’ famous Model T C-Cab known as the “Milk Truck” heralded an era of “Silly Show Cars” like the Red Baron. The Milk Truck’s cartoonish appearance was distinctive, memorable and had terrific kid appeal: all adding up to draw big crowds to car shows where it appeared, thus earning young Dan money as the creator of a feature car. While Dan Woods went on to work with Ed “Big Daddy” Roth in the creation of some of his feature cars, to me he’s most notable as the builder of a generation of innovative T-Buckets of the highest quality through his Contemporary Carriage Works. And he deserves a great deal of additional respect because as Ganahl notes, he gave credit for the inspiration of his 1964 Milk Truck build to a model car he’d seen. But, which model car? The easy answer to Dan’s model car inspiration is the C-Cab scratch built by Bernard Bauerle and featured in the February, 1963 issue of Car Craft magazine in Pat Brollier’s “Modeling the ‘Milk Truck'” photo essay Dan created a strikingly accurate full-scale representation of Bernard’s creation, even down to the dual racing stripes running the length of the C-Cab’s roof. But, where did Bernard Bauerle’s inspiration come from? You see, the July, 1962 issue of Car Craft included the photo above of what was identified as Paul Johnson’s “Pie Wagon” and the similarities to Bauerle’s Milk Truck are so strong that one might only conclude that a) Car Craft misidentified the builder in either ’62 or ’63 or b) Bernard Bauerle bought Paul Johnson’s Pie Wagon C-Cab model and updated it a bit to create his Milk Truck. Who knows? If you can shed some light on this Milk Truck model mystery, please let us know.

3 thoughts on “The Milk Truck Mystery”