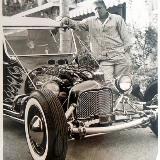 Growing up, my grandparents subscribed to Life Magazine and I would look through each new weekly issue when I visited them. In the Spring of 1957, my 8 year old eyes were transfixed on a full page photo of Southern California rod builder Norm Grabowski chowing down on a car hop-delivered cheeseburger while seated with a buddy in the coolest car I had ever seen! The flames were awesome and the Cadillac engine hanging out there for all to see was mind-boggling.Contrary to popular misconception, the photo of Norm in what would shortly become known as the “Kookie Kar” was not on the cover. Rather, it was part of a Photographic Essay titled, “The drag racing rage: hot rodders grow in numbers but the road to respectability is a rough one.” Wow! A radically cool looking car that’s also part of an outlaw movement — I was hooked.

About a year later, I was able to feed my appetite for more of this fascinating rod that started what would later become known as the T-bucket movement. Warner Brothers introduced the detective TV drama, 77 Sunset Strip, which ran for six seasons and featured car valet Edd “Kookie” Byrnes whose personal car in the show was Norm’s hot rod that had been rented out to the producers for $50 per day. Unfortunately, it wasn’t in every episode, but I became an avid fan always hoping to catch a glimpse.

As coincidence would have it, Norm and Marty Hollmann were buddies and fellow LA Roadsters club members, as you’ll note in this Eric Rickman photo which captures Norm in his T-touring, which later became famous in the TV series “My Mother the Car”. Not only was Norm’s Kookie Kar unique in itself, but because of its exposure on a popular television series, in a very popular mainstream magazine like Life, and later in many car magazines as a result of its role in 77 Sunset Strip, this car became one of the most famous T-Buckets of all time.

5 thoughts on “Norm Grabowski and the Kookie Kar T-Bucket”