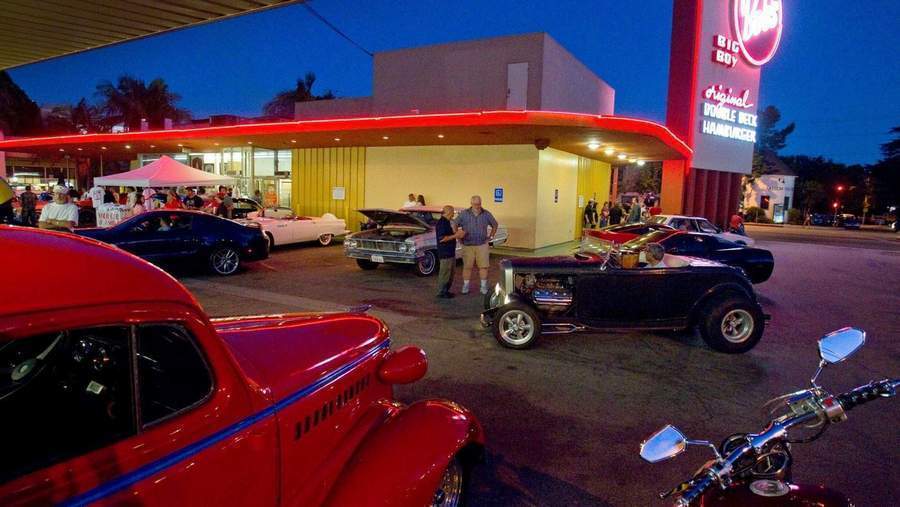 I’m fortunate because I travel all over in my day job (yep, this website is just a part-time labor of love). Wherever it takes me, if timing and weather are in sync, I’ll stay over the weekend to take in car shows, cruises or related T-Bucket and hot rod events. I enjoy seeing the many different ways that someone can build a T-Bucket. This post is about a recent Southern California car show T-Buckets weekend experience that left me wondering:

Where are all those Southern California Car Show T-Buckets?

After a few days working in Southern California where does a T-Bucket hot rod fan head on Friday night? Bob’s Big Boy, of course. Because, figuratively speaking, that Toluca Lake neighborhood drive-in is where this whole T-Bucket phenomenon began in the mid-1950s.

Bob’s is where Tommy Ivo first saw Norm Grabowski‘s seminal T-Bucket and decided to build his own, in which he would later also cruise Bob’s.

Bob’s was the site for the famous LIFE magazine photo shoot that brought Norm’s T-Bucket to a huge portion of the U.S. population. In 1957, LIFE magazine had a circulation of around 7 million and some 28 million readers, compared to HOT ROD magazine’s circulation back then of only about a half-million. You can bet that photo session at Bob’s inspired a whole generation of T-Bucket hot rod fans, who may never have picked up a copy of HOT ROD magazine before. Contrary to popular belief, the photo of Norm at Bob’s didn’t appear on the cover, but on an inside right-hand page in giant (by today’s magazine standards) 10″x14″ size. I can tell you that my grandparents’ issue quickly disappeared, with that photo becoming a poster on my bedroom wall.

To give you an idea of how mind-blowing an image Norm’s T-Bucket was for the time, the coupe on the actual cover of the magazine is what represented a hot rod to the vast majority of the population. By the way, Norm’s T didn’t receive its widespread television exposure until the next year when 77 Sunset Strip debuted. The photo at Bob’s no doubt helped influence the casting of Norm’s T-Bucket for that series.

Although I enjoyed seeing one, I was a bit disappointed it was the only T-Bucket I saw either parked or cruising Bob’s on this particular night. (Photos and info on that T-Bucket deleted after seeing numerous bad reports about the owner). Call me crazy, but wouldn’t one of the most significant spots in T-Bucket history make a logical location for regular Southern California T-Bucket meet-ups?

Undeterred, though, on Saturday morning I headed to San Bernardino for the Annual Rendezvous Back to Route 66 Car Show, which is said to draw some 1000 cars. I knew I’d see some T-Buckets there!

Sure enough, after covering a few blocks of downtown San Bernardino I discovered Patrick Hayes’ “Rat Fink”-themed T-Bucket from Loma Linda, CA. Judging by some of the build details like the split rear wishbones this is likely another earlier-era T-Bucket build, with some nice creative touches like the practical size wood pickup bed.

Patrick’s nice woodwork even extended to a combo rear bumper/step for accessing the pickup box.

Checking out the interior, it looked like he’d been able to use an early GM console to house his shifter and hand brake.

The front end of Patrick’s T-Bucket featured a deeply dropped I-beam and some skeletal ornamentation in keeping with the Rat Fink theme. Overall, a nicely individualized T-Bucket that looks like it sees its share of cruising time in sunny Southern California.

A few more blocks over (the show is on the streets of downtown) I spied the sharp, low-slung T-Bucket of Tom Raney from Grand Terrace, CA.

In checking out the chassis on Tom’s T with its long radius rods and other elements it appears as though it was built following the California Custom Roadsters T-Bucket Chassis Plans. However, as any creative T-Bucket builder is inclined to do there are a few changes or adaptations.

For example, Tom’s T has the steering arms and tie rod ahead of the front axle kind of like on a typical Total Performance T-Bucket chassis while a typical CCR chassis has them behind the front axle. This is all in the realm of personal preference and parts availability, such as steering arms. Or in Tom’s case it may have been that it was felt that it would be too crowded to have the tie rod behind the axle with the tube shocks and overflow tank.

NOTE: Whenever the subject of steering arms ahead of a straight front axle comes up some people want to weigh in with their Ackermann thoughts. In perfect Ackermann steering geometry the pivot points of the steering arms and kingpins lie on a straight line to the center of the rear axle. You can see a nice illustration and more about that in an earlier post where Bob Hamilton covers bending steering arms.

You’ll also note the rear radius rods on Tom’s T differ a bit from the CCR plans style in that they angle up a bit.

That’s likely because it looks like Tom’s T has a pretty flat, as opposed to high arch, rear spring in order to have a lower overall stance.

Overall, this is a very sharp looking T-Bucket and a good example of what can be done when you compare and contrast different T-Bucket plans.

Continuing to view the sights of San Bernardino, I came across Tim Lair’s T-Bucket from Rialto, CA which is no doubt a somewhat newer build with its four-bar front suspension.

The front of Tim’s T had plenty of chrome and polish and I was drawn to his unique mounting of his front friction shocks to the spring shackles.

Being a member of the “Over the Hill Gang” it was only fitting for Tim to have a “Grumpy” theme for his T. It was hard to get photos of Tim’s T without people being gathered around admiring it, a phenomenon common to just about all T-Bucket owners at shows.

The interior of Tim’s T was very nicely done and the Maltese Cross rear window, which matched the taillights and mirrors made that easy to capture.

Now the show in San Bernardino runs from 9 a.m. to 9 p.m. and I got there about mid-way since I had a morning appointment, but only 3 T-Buckets out of roughly a thousand cars! Well, at least my weekend wasn’t over.

On Sunday I set out for Van Nuys and the 7th Annual Galpin Car Show, heralded as one of the biggest shows in the San Fernando Valley, expecting nearly 1000 vehicles as well. After parking and taking a shuttle bus to the show (yes, it’s that big, but also a bit complicated because it’s laid out over several blocks of the giant auto dealership) one of the first cars I laid eyes upon was this blue beauty of an extended body T-Bucket.

Unfortunately, there was no entry info posted on this T and I didn’t see anyone that appeared to be the owner. Judging by the sensor running from the collector pipe I’m left to assume that there might be an EFI setup feeding the low-profile supercharger atop the Chevy smallblock engine.

It very well could be a CCR long T body because the pickup bed with its smooth lines and license plate recess is the companion piece to that body.

The interior of this T with it’s seat divider/console treatment was reminiscent of the old Bird T-Bucket interior inserts but taken to a much higher level.

But I must say that with the four-bar front suspension and triangular rear radius rods it wasn’t possible for me to be able to identify who the chassis builder may have been. Sorry I missed the owner.

My eyes really lit up when I moved about 20 feet away and I was able to take in the stunning LS engined T-Bucket of drag racing and engine building legend Bill Maropulis.

Bill’s T is gorgeous and its performance is second to none. I won’t go into any more detail now because a feature and more is in the offing. But for now, if you’d like to know more about Bill and his T and see some beautiful photography of it check out this great story at Fuel Curve.

And that was it as far as T-Buckets at the Galpin Car Show. It would have been a real letdown day if I had not stopped into the Galpin Auto Sports Museum where it is easy for anyone to get a nice T-Bucket fix, and my earlier story covers that.

So, Where are They?

You would think that being the geographic birthplace of T-Bucket hot rods that you’d find many of them after all these years at California car shows and cruises. But that’s just not the case. I’ve heard comments from Southern California friends and acquaintances along the lines of “I don’t think T-Buckets are very popular anymore”. And that’s the only place I’ve heard that. I’ll be doing another story shortly that disproves that theory, and another after that specifically about California T-Buckets. So, stay tuned.