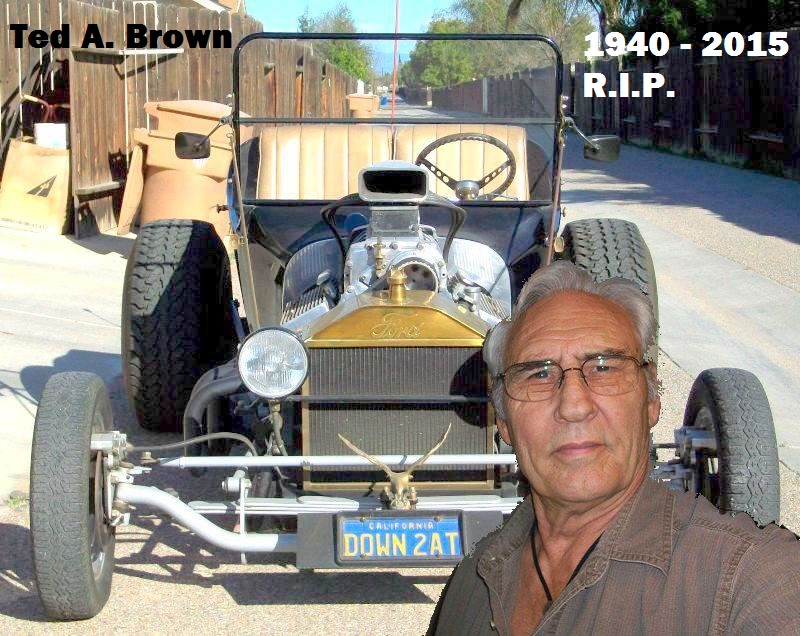 It was five years ago today that we lost a man who was one of the most influential contributors to the everlasting popularity of T-Bucket hot rods. Ted Brown‘s sense of style has influenced hundreds, if not thousands, of T-Buckets.

In May, 1968 Rod & Custom magazine referred to Ted Brown as “the original street rodder with Concours d’Elegance taste, and owner/builder of the trick T of the century.”

Referring to Ted and his street rod building shop, they went on to say, “If we had time to get over there every day, we could fill a Hot Rod Magazine Annual each month with his ideas and still have enough left over to fill R&C’s ‘Street Rod Tips’ section for an entire year.” A few months later, Ted’s strikingly cool T-Bucket appeared on the magazine’s cover and in a detailed feature story.

Ted and I became friends back in 2008 when he was retired and had been away from the T-Bucket world for a while. However, he still drove his T-Bucket, which he’d put over 200,000 miles on, and had continuously modified and adapted it over the years in numerous ways to make it more comfortable and safe.

I was happy to introduce Ted to the old TBucketeers Forum, which he enthusiastically joined and was able to help and inspire countless others with his vast knowledge.

On this anniversary of his passing, the following is an updated reprint of a tribute story I did about Ted in April, 2010. Little did I know at the time that the little tribute video a threw together in 2009 would garner over 24,000 YouTube views.

Originally published April 4, 2010:  Ted Brown was a young hot rodder from Minnesota who heeded the advice to “go west young man” to seek fame and fortune. Man, was he ever successful!

After arriving in Southern California, Ted had the opportunity to see Norm Grabowski’s “Kookie” T-bucket at the famous Bob’s Big Boy in Toluca Lake and “was totally blown away”. “That car is what got me wanting to build those types of rods,” Ted said recently. But first Ted went into partnership with another legendary chassis builder, Chuck Finders, and contributed to the success of many of the nationally successful A/Gas Supercharged cars of the day, including Stone Woods & Cook, K.S. Pittman, Jr. Thompson, Hamberis & Mitchell and, my personal favorite, the MGM-C & O Hydro AG/S Austin pickup.

About 10 years ago, I bought a set of the California Custom Roadsters (CCR) T-bucket chassis plans. I was particularly taken with the CCR logo image with its rakish lines and sleek top.

Not too long ago, I was looking at an old Rod & Custom from the early 70s and noticed an uncanny resemblence to the CCR image in a Ted Brown Chassis ad. After researching my old magazines a bit more, I then made the connection. The first ads for the CCR plans, which ran in 1973, referred to “Plans & Data for building the famous Ted Brown/Bill Keifer Chassis.” I then learned that Ted established CCR in 1971 with Bill Keifer as his partner; the CCR T-Bucket plans were based on Ted’s unique, original design; Ted eventually sold his interest in the company, which continued to grow as a producer of some of the finest, best looking T-Buckets available and thanks to his distinctively handsome frame design of the early 70s many thousands of T-Buckets exist today — many built by CCR and many more by home builders around the world thanks to CCR’s professionally executed and widely adopted T-Bucket plans (estimated at 4000 T-buckets in 1977). As a result of his early exit from the business, in my opinion, Ted Brown is perhaps the most influential, yet unrecognized, T-bucket chassis designer of all time.

Today, Ted is “retired” in Bakersfield, CA and still driving his T-bucket which has racked up over 200,000 miles and has been home to a variety of engines, including Buick nailhead as well as big block and small block Chevys. CCR’s successful T-Bucket enterprise continues today in Chino, CA, with continuous refinement of the original T-Bucket chassis and production of “the world’s best T-Bucket body”. Postscript April 27, 2015: We were saddened to learn that Ted Brown was stricken with a rare form of atypical Parkinson’s and passed away. He will be missed by many, but his legacy will not be forgotten.
You may view Ted’s obituary and share your thoughts in the Guest Book here>   April 27, 2020 Note: Ted’s Guest Book is still active and if his work inspired you we encourage you to leave a short note of remembrance. Thanks.