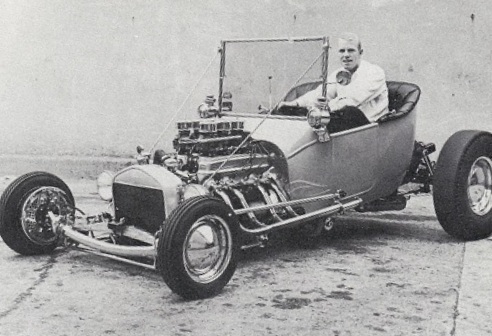 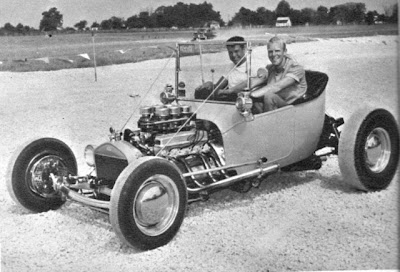 Up until 1962, pretty much every T-Bucket that had appeared in the Big 3 car magazines (Hot Rod, Rod & Custom, Car Craft) had been from the West Coast — California, more specifically. So, it was quite a shock to see a really dramatically unique T-Bucket appear in both Hot Rod and Car Craft that year from the East Coast “birthplace of the American industrial revolution”, Waltham, Massachusetts.

This is an update from an original 2010 post because thanks to the Petersen Photo Archives we’re able to include a wealth of new detailed photos of the George Gould T-Bucket. 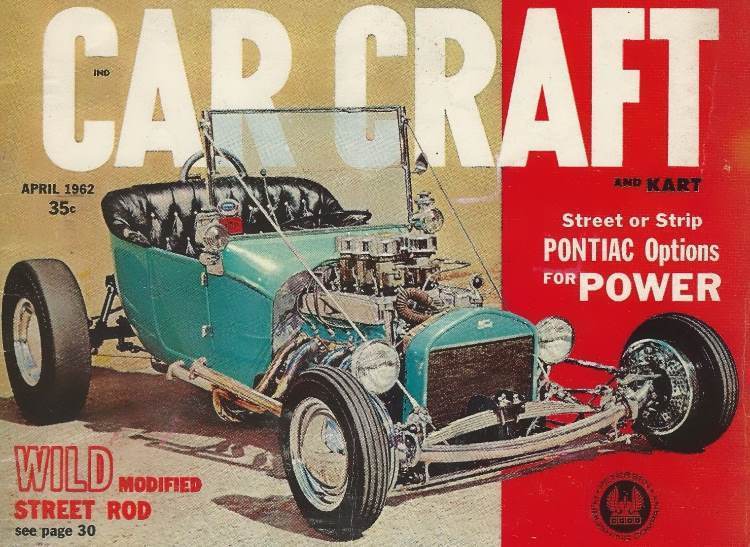 Heck, it even made the cover of Car Craft! It meant business with its six-deuce Buick nailhead power and the bobtail look was further accentuated with a unique fuel tank and a very short wheelbase. 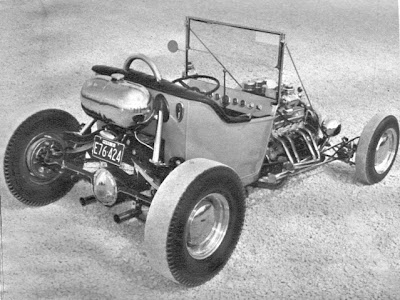 What was really cool was that the magazine coverage noted that Gould drove his hot rod to shows all over New England and even beyond. 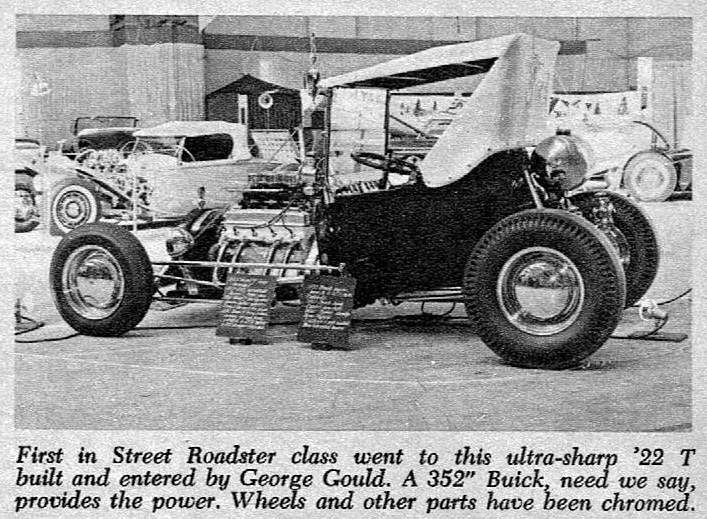 As in this example of a win at the Hartford, CT show in 1963 with a new darker paint job. 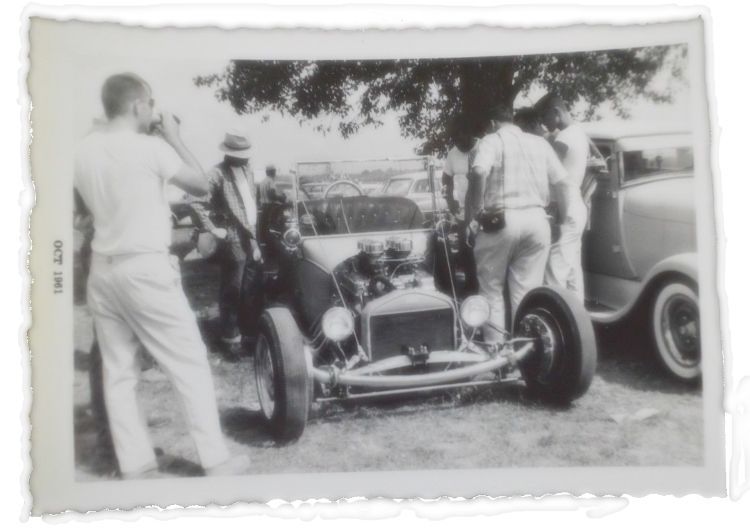 This 1961 snapshot from an event confirms the fact. 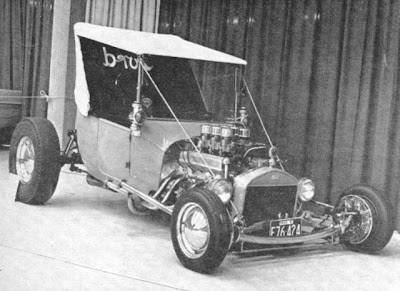 The above photo is from George winning Best Rod in Show in Montreal, Canada in 1962.
Alas, it wasn’t too long before George’s T-Bucket was next seen in the classifieds in the back of Hot Rod magazine. Oh, to have had $4k back in the day, but back then the asking price was almost a thousand dollars more than the average new car price. 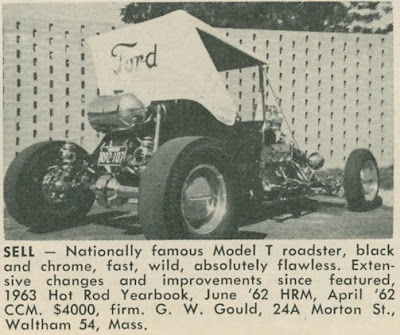 A few months later another for sale ad ran and instead of the “$4000, firm” it was “Must sacrifice, best offer”. 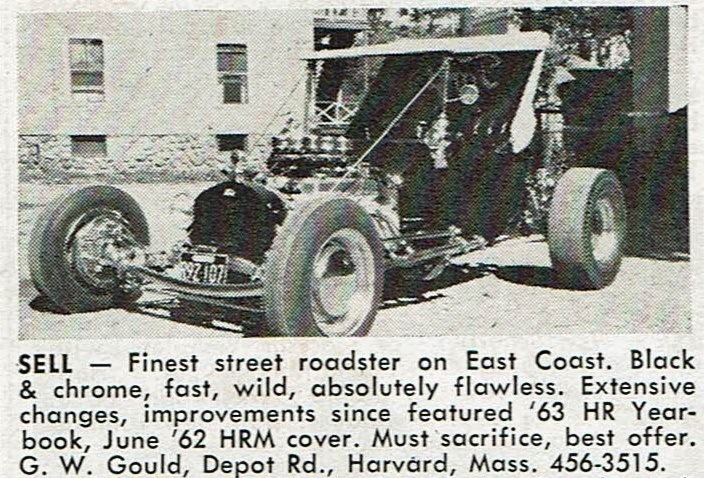 To me, George Gould’s T-Bucket roadster was a very influential East Coast show car that proved such a hot rod could be a beautiful winner, yet could also be driven hard and put away wet. 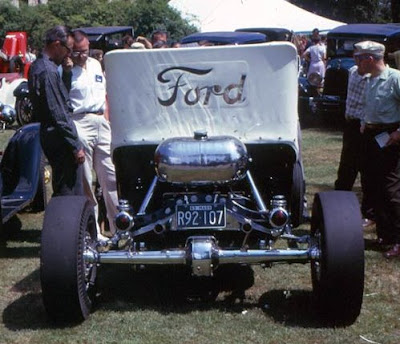 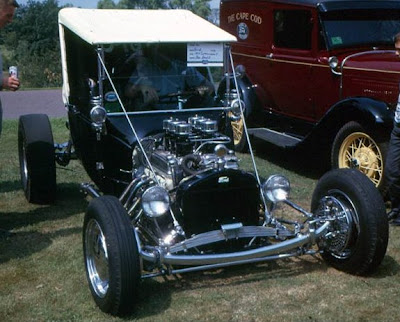 With thanks to Jay for his comment below I’m happy to add a photo of the George Gould T-Bucket in its current state. Recently, Marcus Edell, who administers the Hot Rods of the 1960s group on Facebook posted a couple of more recent shots of the George Gould T-Bucket roadster that I wanted to add so that you may see it in full color glory. Could that be Fritz Schenck admiring George’s T?

And in that Facebook post Brian Lenox added a nice 1960s era photo of George’s T which I wanted to include as well.

But what really makes this a worthy update is the treasure trove of photos the Petersen Photo Archives have uncovered from when Petersen first photographed George’s T. This is fascinating because these photos were taken at the 1961 NHRA National Drags at Indianapolis. It’s my understanding that George drove his T roadster to Indianapolis from his home in Massachusetts!

What the photographers did was have George take his roadster to a then unoccupied spot on the pea gravel covered pits at Indy. You’ll really enjoy all the detail you’ll find in this terrific photo gallery thanks to the Petersen Digital Archives.

While rare in Massachusetts, George Gould’s T-Bucket wasn’t the only one around back then and he was frequently seen in the company of fellow Bay Stater Fred Steele’s T-Bucket that became famous on the cover of the “Ventures in Space” record album.