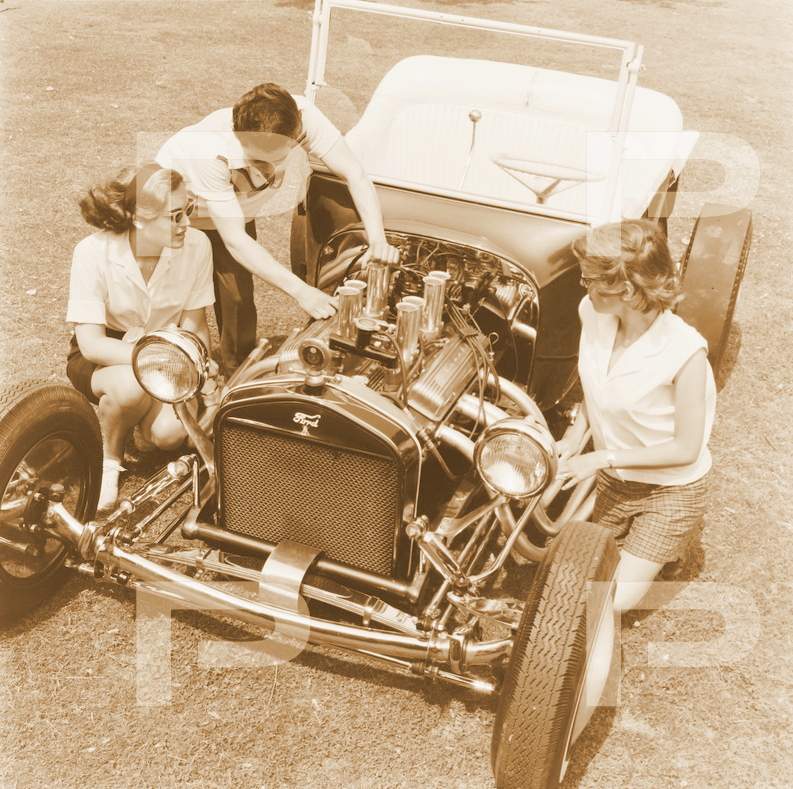 In the mid-1950s Tommy Ivo built one of hot rod history’s two most influential T-Bucket roadsters. At the time, he had the geographic convenience of being able to literally crawl under the other most influential T-Bucket, Norm Grabowski’s, to understand the layout, get dimensions and the inspiration that would lead to his own unique T-Bucket creation. A couple years later and 3000 miles across the country, however, just two magazine features on the Grabowski and Ivo T-Buckets were the only guides available in building the Bill Strickland T-Bucket roadster.

The Bill Strickland T-Bucket roadster immediately grabbed my attention when I picked up the December 1959 issue of Hot Rod Magazine. It had the look — and more!

I mean who’d ever seen pinstriped M&H Racemaster drag slicks! And what about those four-toe feet chasing around the banjo rear end housing a decade before Eelco adopted that comic hot rod image. The feet may well have been inspired by the feet Von Dutch applied to the dash of Tommy Ivo’s T. But those were just some of the cool little details that caught an 11-year-old’s eyes back then.

To me, everything about the Bill Strickland T-Bucket roadster was perfect. Now, thanks to the Petersen SEMA Digitization Project, there are many never-before-seen photos that help tell the story of this inspirational T-Bucket hot rod.

The story goes that Bill Strickland had lost his license and spent his time as a pedestrian building this T-Bucket roadster so that he could channel his need for speed to the drag strip instead of on the highway. It represents a $3500 investment on which Bill did all the work himself, except body, paint and upholstery.

The photos were shot by the late Ed Eaton, who was picked to become one of the NHRA’s original regional supervisors by Wally Parks, who was also the editor of Hot Rod Magazine at the time.

With Yale University being just down the road from Niantic, Ed chose a setting that was reflective of an Ivy League university and included a couple of coeds to complete the scene.

Like Grabowski and Ivo, Bill Strickland chose a Model A chassis of 1930 vintage to modify for his T-Bucket build.

While Norm and Tommy used the front half of Model T touring bodies for their buckets, Bill was able to build his using a 1924 Model T runabout body he purchased for $100. And like Tommy he used the 1922 to 1925 style Model T windshield stanchions, without the windshield support rods used by Norm.

I don’t believe Bill really put in much street time with his T, because when you look at the engine you’ll notice it’s pretty much just a strip performer. Case in point, the radiator isn’t really connected to the manifolding on the Hilborn mechanical fuel injection.

The small block Chevy from a 1958 Corvette was bored to 4″ for a 301 cubic inch displacement with Jahns pistons and featured a Harman & Collins cam initially. I particularly liked the bell-tipped individual tuned equal-length exhaust headers. Another hint of the T’s drag strip intentions.

At the time, Ivo’s T-Bucket was turning 11-second elapsed times at a top speed of 119 mph. By comparison, on its first time out the Bill Strickland T-Bucket roadster ran 114 mph in the quarter.

Another indication of the Bill Strickland T-Bucket roadster’s quarter mile bona fides is the brakeless front wheels, which sport the very cool looking polished disks attached to the spindles as a tool to “streamline” the car and more often seen on cars in Bonneville competition.

Bill channeled the T body 4 inches over the Model A frame. The wheelbase was set at a typical for the time 96 inches.Of course, the Moon discs on the front and rear wheels are the perfect complement.

Bill Strickland nailed it traditional T-Bucket looks-wise up front with his choice of a V8-60 tubular front axle from a 1939 Ford. But, that’s only the beginning of the awesome traditional appearance. Because that axle alone just doesn’t do it.

You see, the V8-60 tubular axle (which is oval, not round, tube) was designed for the spring to be mounted on top of the axle. Norm Grabowski found that with his abbreviated chassis that the tie rod running behind the axle would interfere with the radiator. This brought about some innovation that would have significant effect on hot rods for years to come.

Norm went to the scrap yard and picked up some front spring hangers from a 1940 Ford. However, the ’40 Ford front suspension design had the spring in front of the axle rather than on top and if used that way would make Norm’s tie rod to radiator interference problem even worse.

Norm cut the spring hangers off the ’40 Ford wishbone assembly which was then discarded.

The next move was genius. He reverse mounted the spring hangers so that the spring would now hang behind the tubular front axle, providing sufficient clearance for the tie rod. And that’s what Tommy Ivo did for his T and in turn what Bill Strickland did for his T-Bucket roadster. Bill even added the semicircles that Norm attached to his front axle to use as tow bar attachment points.

Around back, Bill used a transverse spring attached to a 1939 Ford banjo style rear axle with 4.44 gears and hydraulic brakes — his only brakes. Another cool detail is the flair he added to the pickup box so that the shock absorber blends in nicely. And for the life of me I can’t figure out what those taillights are. At first, I thought 1941 Studebaker, but on looking further they’re not. They’re unique and if you know what they are from please use the “Comments” to inform us all.

Bill’s pickup bed appears to be a shortened Model A style like Norm and Tommy used, with just enough room for a battery, fuel tank and a few tools. When the photos were taken, Bill already had plans to replace the banjo rear end with a quickchange center section.

One of the distinctively different Bill Strickland touches on his T-Bucket is the steering box, which came from a 1938 Plymouth. It was mounted so that the sector shaft was below the frame rails and the Pitman arm and drag link aligned with the steering arm on the front spindle.

Bill also went with the forerunner of the four-bar arrangement that Norm had used and the lines of those bars were close enough to that of the drag link to give a nice overall appearance.

The dash hosted a full complement of Stewart-Warner gauges and if you look below the dash on the left side you’ll see the hand-operated fuel pump that was used to build pressure in the fuel injection system. The chrome shift lever was attached to a heavy duty Lincoln transmission.

The white Naugahyde upholstery was carried over to the bed cover and the pickup bed itself was nicely molded to the runabout body.

The Bill Strickland T-Bucket roadster was finished in a shade of red lacquer termed “fire gold” applied by Smitty’s Auto Body, which was a dramatic look contrasted by the whitewalls, white upholstery and chromed or polished accents.

What’s interesting to note is that for all of its show-winning good looks the Bill Strickland T-Bucket performed just as well. And Bill took the performance side seriously.

Yes, at the drag strip it was taken down to bare bones to race in the very competitive Modified Roadster class. That included removing the windshield, grille shell/radiator, headlights and adding a rollbar.

Bill’s Tommy Ivo influence was confirmed when Rodding and Restyling magazine’s April, 1960 issue ran a feature on Bill’s T. They noted that “a rod in a movie he saw four years ago inspired 24-year-old Bill Strickland” to build his T-Bucket roadster. The magazine then used a play on words to title the feature, “Paramount Production”.

It was noted that Bill used German-made tires on Mercury rims on the front of his T and the New England produced M&H slicks were the only thing to run if you were in Connecticut.

The transmission attached to that super-long, chromed shift lever has been described as a Lincoln and also as from a ’39 Ford. So, it’s likely a ’39 Ford Transmission with Lincoln-Zephyr Gears.

Not a great photo, but you can more clearly see that the coolant passages on the Hilborn mechanical fuel injection are not connected to the radiator, which is apparently there for appearance-sake in car shows and is removed for racing.

After a short time running at the drags and evidently switching to a Chet Herbert cam Bill Strickland was turning an 11.7 second e.t. at 126 mph at the Charlestown, Rhode Island drag strip. Pretty strong for 1959-60!

Bill Strickland went on to run a speed shop in New London, CT and became known by his nickname, Willy. His shop was named CWS Speed Equipment and he ran and sponsored dragsters.

It was a popular speed shop in the area and depending on who you spoke to the CWS could mean “Cee Willy Strickland” or “Cash Was Spent”.

It’s my understanding that Bill Strickland passed away unexpectedly at around age 42. His T-Bucket and other hot rod endeavors will be long remembered.