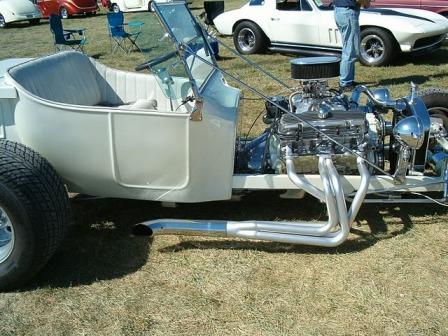 T-Bucket “trip ups” are those mistakes, sometimes small — sometimes significant, in judgement or in execution, that in my one man’s opinion, result in a T-Bucket that’s either less than perfect, uninspiring or downright hideous looking. Over the years, I’ve seen a lot of T-Buckets and have made mental note of the many trip ups that can occur. This is the first in a new series at TBucketPlans.com that will reveal the T-Bucket trip ups you’ll want to avoid in your own bucket build. For this inaugural installment, we’ll look at a T-Bucket I fell in love with back in 2004 at the Good Guys show in Waukesha, WI. There were quite a few T-Buckets at this show, but this pearlescent white one was my favorite. There were some tell-tale signs that this bucket was based on the Dick Scritchfield series of T-Bucket plans that ran in Car Craft magazine back in 1967/68. However, the builder of this bucket chose not to use the clunky-looking Corvair coil springs to suspend the front axle. Instead, he went with the tried and true, and much more pleasing looking, transverse leaf spring. The most notable sign it was based on the Scritchfield plans was the way the rear coil spring/shock absorber buckets were fashioned. The big Pontiac engine was a unique touch and this car’s overall look was beautiful, but something seemed a bit strange about it. Another Car Craft/Scritchfield clue was the use of an unreversed Corvair steering box with a near vertical steering column and a nicely contoured scoop on the side of the body to provide clearance for the pitman arm. I had been up close drooling over this gorgeous bucket and taking photos and then I moved back a bit to get a profile shot and whoa! What’s with the big gap between the firewall and that Poncho mill?! Looks like a T-Bucket trip up to me. The whole bellhousing was exposed. T-Bucket Trip Up: For a T-Bucket to look right you need to get the rear of the engine as close as possible to the firewall. But, at least he gets points for the chrome bellhousing. Hey, maybe that’s why it was done that way — to show off the investment in shiney stuff that wouldn’t be seen otherwise. I’m not bringing this up as a knock on this car. In fact, after I took my first pics of it back in ’04 my laptop was stolen from my room in an Akron hotel, and I’ll never stay in that chain again. But, losing the pics of this car was one of the biggest disappointments of that theft. Fortunately, this same bucket reappeared a couple years later when the Good Guys held their first event in the Chicago area and I was able to take these shots. This particular bucket has a strikingly beautiful interior that incorporates a look I haven’t seen before: a hard vinyl laminate floor covering. Of course, that dramatic floor is flat to the firewall, with no hump for bellhousing or transmission clearance. Maybe that’s why the engine was moved forward? By the way, if this is your car or you know the owner please know that I’m a big admirer and would love it if you could post a response with a little more info on the car and its history. As I noted, this particular trip up is something that in my mind keeps this bucket from being perfect. Some people feel the same way about Cindy Crawford’s mole.