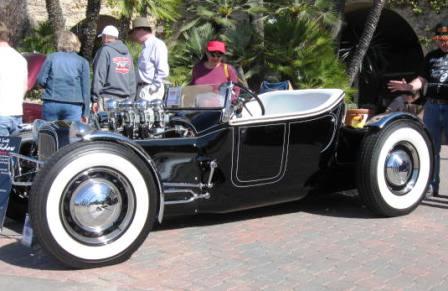 While I’m not reluctant to put forth my belief that T-Buckets are the “real” hot rods, it’s helpful for visitors here at TBucketPlans.com to know that many hot rod authorities over the years have expressed their own similar, yet unique, opinions on the subject of T-Buckets. I’ll start by listing a few, but this particular post will always be a “work in progress” because from time to time I will add comments from other hot rod notables on the uniqueness and desirability of T-Buckets. “More so than any other form of street rod, the T-Bucket — because fenders, hood panels, bumpers, and the like aren’t in the way — is perhaps the ultimate vehicle through which a builder can express his likes, dislikes and ideas. He builds the frame of his own choosing and design; then, in his own special way, he adds body and major components, embellishes them with as many or few of the goodies to be found, and zap … this T-Bucket thing, as you can see, becomes a very personal thing.” Tom Daniel, the most prolific designer of wild automotive and cycle designs ever, who created over 85 wild model car kits for Monogram models.

“Look at it this way: a regular Ford, or whatever body style you may prefer, is pretty much an insert-tab-A-into-slot-A proposition. The fenders go here, the cowl and hood there, and the body, yes, it goes like so. And though running gear and cosmetics may differ from car to car, the end result for all intents and purposes is a car that’s nice, all right, but conceals those things making it truly unique. Sadly, the many attractive limbs that make up its shapely chassis are covered and forever kept from view. To the bucketeer, such metallic coverings are a turn-off. What red-blooded American rodder worth his weight in chrome could turn from the unveiled beauty of a let-it-all-hang-out filly?” Bud Bryan, Editor, Rod & Custom magazine. “Let’s face it, dad, there are no fenders to hide the polish, no hood to cover the glitter, no rearend overhang to interfere with the chromatic display of a fully plated Jag out back. Only a T-Bucket offers the builder such a display piece to show off his or her talents and only a fool wouldn’t take advantage of the unlimited opportunities offered by this eclectic form of automotive innovation.” Gray Baskerville, Associate Editor, Rod & Custom and Hot Rod magazines. “T-buckets are here to stay! The fellows who poke fun at “Ts” are either people who have never owned or driven one or they are converts to more conventional rods who took a lot of heat while they were bucketeers.” Bill Burnham, Columnist, Street Rodder magazine. “If Bo Jones, Cotton Werksman, and Stan Dalton got together, each behind the wheel of his own open-top T creation (’27, ’15’ and ’22 respectively), the entire sport would never be the same.” Bud Bryan, Editor, Rod & Custom magazine.

Stay tuned for more comments from other hot rod luminaries on the “real” hot rods: T-Buckets.

OK, maybe not a “hot rod” authority, but I’d say that Motor Trend magazine would certainly be considered one of the premier automotive authorities. They just published (June 3, 2014) a story titled, 15 Best Convertibles of All Time which, of course, covered the T-Bucket:

With excessive horsepower and a heavily modified body, the Ford T-Bucket could be considered the poster child for hot rodding. Based on the two-seat Ford Model T roadster with its “bucket”-shaped passenger compartment, hot rodders swap out the original 20-hp 2.9-liter I-4 for newer V-8 engine with upwards of 600 hp or more.