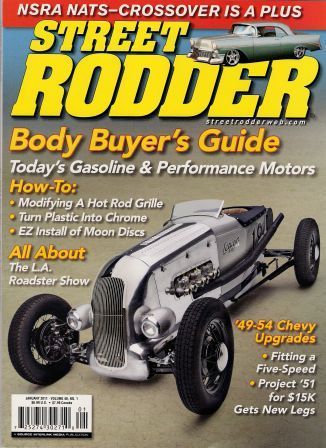 Having recently let my subscription expire, because I defiantly ignore the scores of renewal notices I get from magazines in hopes they’ll someday give up the practice of spamming my postal service mailbox, I picked up the January 2011 edition of Street Rodder magazine at the local supermarket. After smarting over the $6.99 price (now I realize why it’s better to subscribe), what caught my eye was Kirk Jones’ ’27 Nash sedan that had been miraculously cut down into a stunning single-seat modified roadster. Hey, that’s close enough to a T-Bucket for me (but that’s a post for another day). So, once I had a chance to take a break from Christmas decorating I quickly flipped through Street Rodder to see if it might have more content my T-Bucket-loving eyes would appreciate. And, I was very pleasantly surprised.

To start, in their coverage of the L.A. Roadster Show was a nice pic of one of my favorites, Gary DeFer‘s decade-long-in-the-build Norm Grabowski-inspired T-Bucket, with the 1950 Cadillac engine replacing the previous small block Ford. The coverage continued with a nice pic of the Barris-built Munster Koach and when they shifted their cameras to the swap meet section of the show there was a great looking gold ’27 T roadster pickup as well as a Buick nailhead powered blue ’27 that was also for sale.

In their coverage of this year’s Street Rod Nationals in Louisville, was another great pic of the new Speedway Motors “Tribute” T-Bucket Kit, with the promise that a Street Rodder story on it will be forthcoming (OK, I’m heading to the P.O. tomorrow with my renewal). To top off the Nationals coverage, they included a nice pic of a 20s Dodge bucket that was for sale cheap in the swaps.

Moving on to coverage of the So-Cal Speed Shop Party, was a nice pic of Gary Lorenzini being reunited with his 60s built T-Bucket that was sold 35 years ago, with the reunion courtesy of his thoughtful son, Scott.

In perusing the 2011 Body Buyers Guide feature, it was great to see some coverage of the cool looking Wintec Roadster stretched T-Bucket for the family man that I’m looking forward to covering in more detail. Continuing with my page flipping, my heart was warmed by this month’s Early Iron segment which highlighted Dick DeLuna’s ’26 Ford full-fendered roadster pickup with the nostalgic jalopy look. Paging through the ads in the back it was nice to see the Lindblad Chassis ad they’ve been running for years on their coil over shock T-Bucket chassis kits (sure wish they’d get a website) and a repeat of the “nostalgic” Baron & Tucker Hot Rods T-Bucket ad.

As a bonus, the January issue was poly-bagged with a 2011 calendar. Was I expecting too much? No way! With the Total Performance-based superclean blown, red Paul Gulley T-Bucket in February and Tim Brown’s ’27 modified roadster holding down June, I might just have to hang this calendar on the garage wall.

I guess I really shouldn’t be so surprised by all this nice T-Bucket content in Street Rodder magazine. After all, Senior Editor, Eric Geisert, is a regular at the NTBA T-Bucket Nationals and has done many a beautiful T-Bucket feature over the years. And, Street Rodder’s Editorial Director, Brian Brennan, was holding down that post at Rod Action magazine during the Fad-T heydays of the 70s. Maybe next time, I’ll pay more attention when those renewal notices start coming, although I still wish they wouldn’t start sending the barrage a full year before my multi-year subscription is up.