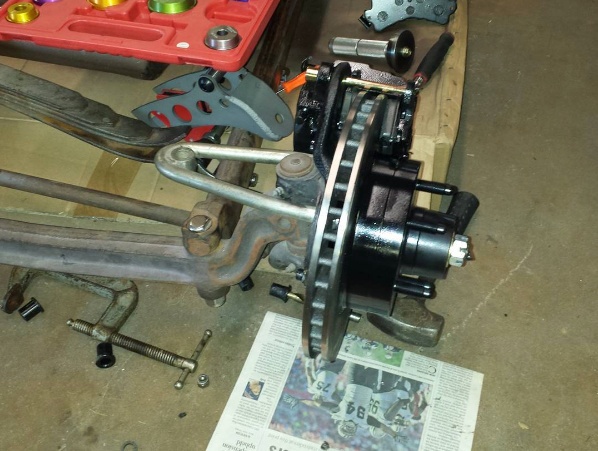 As we tune into today’s episode of Cody the Car Guy‘s accelerated build, T-Bucket disc brakes are installed and the project gets a name. Because Cody decided to make a switch from the originally planned GM LS engine, he has given his T-Bucket the name “Li’l Mayhem” because the new engine, although yet to be revealed, will more than justify the name. You’ll recall from our last installment that Cody unboxed the Speedway Motors T-Bucket disc brakes and they have now been installed. With the T-Bucket disc brakes replacing the old drum brakes and having a new 5×4.5 bolt pattern to match the 8.8 Ford rear end, Cody has had to temporarily use some available wider wheels and tires that fit since he didn’t have any more narrow wheels available to mate up to the planned wide whitewall tires.

In the photo above, you’ll see that the split wishbone radius rods have been installed along with the new steering arm. The combination shock mounts/headlight stands have also been positioned and are ready for welding to the chassis. Cody decided to shorten the stock T windshield to a height of only nine inches and you’ll note that he has laid it back at a nice, jaunty angle. If you look in the lower left corner of the photo above you will also see the full complement of gauges that will be installed in “Li’l Mayhem’s” dashboard. The interior will get some preliminary basic upholstery by one of Cody’s buddies. Later, it will be nicely finished although the steel body will remain “rat” looking.

For now, the 5-speed manual transmission remains under wraps and Cody has fabrication to do on the Ford 8.8 rear end with its offset center section.

So, kick back and enjoy today’s video.

While time is tight to make the 20th anniversary Cruisin the Coast, with all the changes the past few weeks, the anticipation is building for the big reveal of Cody’s new high-performance engine choice. So be sure to check back tomorrow.