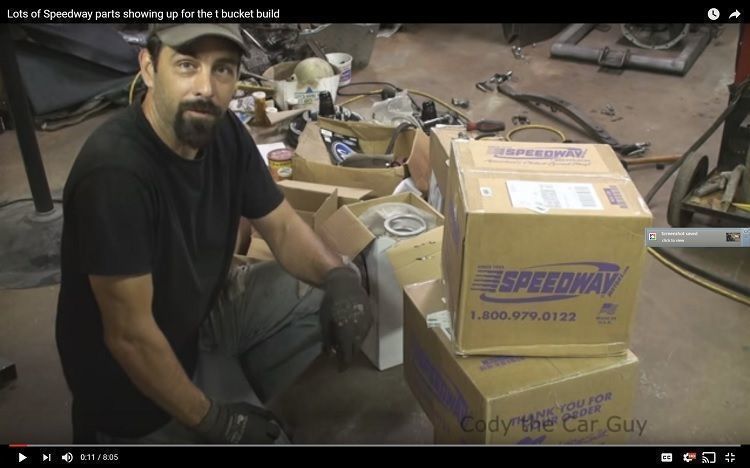 Whether you know it or not, Cody the Car Guy is going to let you in on one of the biggest trends in video: unboxing. Yep, by watching Cody take Speedway T-Bucket parts out of their boxes in today’s video you’re on the cutting edge of video viewing. Huh? Well, according to a report by CNN, “Since 2010, the number of YouTube clips with ‘unboxing’ in the headline has increased 871%. Last year alone, 2,370 days, or 6.5 years, worth of unboxing footage was uploaded to the site.”

And just why are so many people fascinated by this unboxing phenomenon? Here’s what CNN said:

Unboxing videos offer an unvarnished and honest peek at commercial products. The glossy, heavily retouched images and videos companies share of their goods often vary from what’s really in the box. People want to know what they’re really getting, whether the product looks cheap or well made, or if there are more parts than advertised. It’s research material for devoted comparison shoppers and collectors. There’s quite a challenge before Cody the Car Guy as he continues preparations to get an unfinished steel-bodied rat rod T-Bucket project he bought completed, rolling and licensed in time to make the 20th anniversary Cruisin the Coast this month in Gulfport, Mississippi.

And like most projects, change is inevitable. Cody decided to ditch the old front drum brakes for disc brakes. He’s also getting rid of the old Ford banjo rear end and replacing it with a modern Ford 8.8 rear. With those changes, he’s also having to change the wheels front and back to a 5×4.5 pattern. And he’ll be switching to a Corvair type steering box, too. If that’s not enough change, the planned automatic transmission is going to be replaced by a five speed manual tranny, which will necessitate fabrication of a clutch pedal assembly in the tight T-Bucket confines. So, kick back and enjoy the latest installment as Cody unboxes a bunch of Speedway T-Bucket parts.

Hey, speaking of change, didn’t it seem like Cody also teased that there might be a change in engines from the originally planned GM LS motor? Stay tuned.