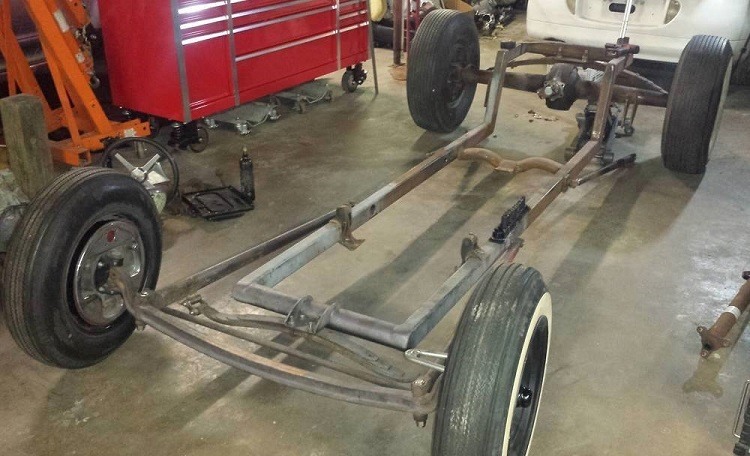 In yesterday’s kick-off installment on how Cody the Car Guy has set out to build a T-Bucket in 20 days for Cruisin the Coast, you got to see the pile of parts he’s starting with. He had broken down the unfinished T-Bucket project he bought almost a year ago to assess what he had. Now he’s ready to put it back together as a T-Bucket rolling chassis. After a full day working in his shop, Cody bolted up the rear end to the frame and is going to test assemble the T-Bucket rolling chassis to make the necessary chassis measurements for further work and to square things up before going further.

In this video, he bolts up the front axle assembly with the newly painted brake drums. But, the first problem arises when Cody can’t find the box with the brake components. You’ll see him put the wide whitewall bias ply tires on to get the T-Bucket rolling chassis where it can be moved around the shop. But that won’t be for long because after measurements are taken he’s got more welding and fabrication to do on the chassis.

And pay special attention to where the pinion of the vintage Ford banjo rear end comes out in relation to the high kickup of the frame. It looks like the drive shaft tunnel might have to be an arm rest.

And make sure to check back here daily and we’ll keep you up-to-date with new installments on Cody’s 20 day T-Bucket build.