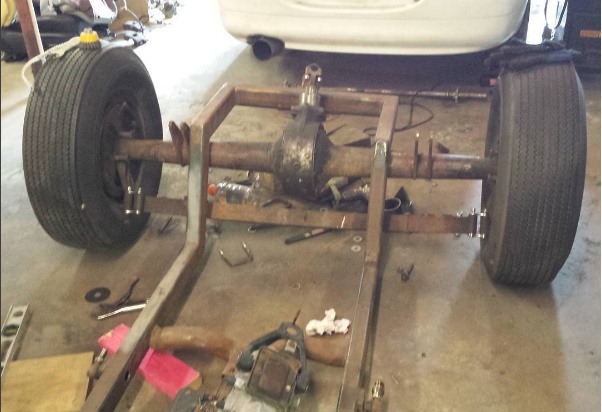 In this installment, Cody the Car Guy has to make some decisions on what to do so that his T-Bucket rear end doesn’t take up all the passenger compartment and also doesn’t fail when subjected to a powerful engine. And after finding the missing box of drum brake parts, Cody decides that with a fast T-Bucket it makes sense to go with a Speedway Motors disc brake upgrade, given the time and cost of overhauling the drums.

Enjoy the video installment below and after that you can learn a bit about the benefits of hypoid gearing for a T-Bucket rear differential when you have modern power.

Do you really want a banjo T-Bucket rear end? Basically, the 1932 to 1948 Ford “Banjo” rear end got that name because from the side the differential’s shape was similar to that of the stringed instrument, with the driveshaft coming out the center of the circular configuration. That was because the banjo differential used gears designed such that the pinion gear meshed with the ring gear at its center line. That was well and good until Ford’s stylists wanted to design more modern, lower profile automobiles while their engineers also wanted to design rear axle gears that would work with higher horsepower engines and last longer. That brought about what’s known as hypoid gearing. The gears were now designed so that the pinion gear (2) would intersect at a point lower than the center line of the ring gear (1). To do this required a big change in gear geometry because you can’t just move the pinion gear down without redesigning everything so that a proper gear mesh is maintained. But the big change was that the new hypoid gear geometry required a whole new design of gear cutting machinery in order to be able to hob or cut the new spiral bevel configuration.

As a result, they achieved improved gear mesh because of the larger gear tooth contact area. Therefore, the gears could handle more power. Of course, the new design allowed a lower driveshaft position which meant the seating could be lower in the car. In Cody’s case, where he’s considering a modern Ford 8.8 or 9 inch T-Bucket rear end choice, you’ll see on the above drawing that it provides an over two inch reduction in the driveshaft interference in the passenger compartment of a deeply channeled T-Bucket.

And while a traditional banjo style T-Bucket rear might look cool, a gear set that was designed for less than 100 horsepower will fail pretty quickly when the 350+ horsepower from a Chevy LS engine is applied.