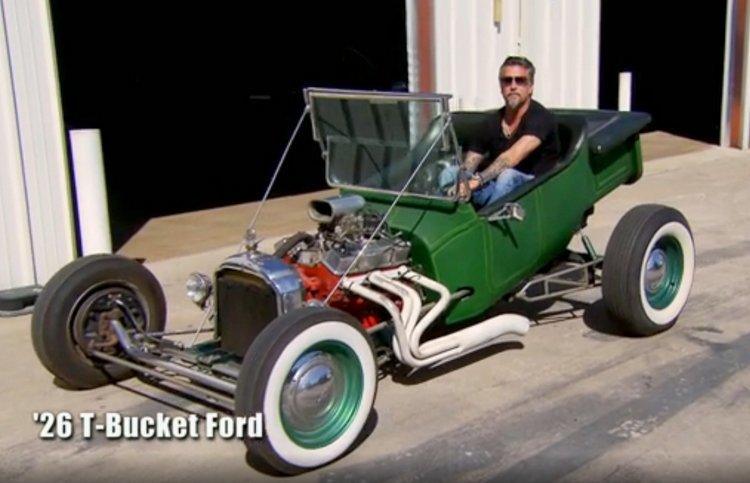 I heard that this week on Discovery Channel’s Fast n’ Loud that they would be purchasing a T-Bucket. So, I dutifully tuned in to the Fast n Loud T-Bucket episode to see if there might be anything worth sharing with our followers at TBucketPlans.com. And I was pleasantly surprised. As soon as I saw the Fast n Loud T-Bucket appear, I realized that I had seen that particular T before.

Are you green with envy over this T-Bucket? #FastNLoud #CarPorn pic.twitter.com/85yzEOmt33 By the way, this happens in Fast n Loud Season 11, Episode 4, “The Pickup Artist”. Richard escapes the Gas Monkey Garage for the beautiful year around weather of sunny San Diego. He’s on the trail of a nostalgic 1970s T-Bucket owned by Jason Sharp, the grandson of legendary speed equipment manufacturer, Al Sharp.

Here’s how the now Fast n Loud T-Bucket was described late last year when it was listed on eBay for $12,500: 1926 Ford model T-Bucket. This is crazy T Bucket built in the late 60′ s from a kit. It was built by a Chevy dealership in San Diego. It was built originally with the Z28 302 engine with matching M22. The 4 speed was also chromed. I took this engine and trans out for the owner, and then installed this 327. The 1968 327 came out of a convertible Camaro which got an LS1 swap. It has around 30k miles on it. It has moderately built 327, with a Schneider camshaft, Edelbrock 625cfm carburetor, and Edelbrock intake. Engine is solid mounted on all four corners with small rubber gaskets. Old brass radiator with a working Model T cap thermostat, and an electric fan. Has a rebuilt TH350 with less than 100 miles on it. Front end consists of a 4″ drop chrome tube axle with chrome hairpins and 42′-48′ Ford juice brakes. Steering is controlled by a chromed Corvair box, which chrome is heavily patina’d. Rear end is out of a 55′-57′ Chevy and is also chromed, hung by quarter-elliptic springs and hairpins. Even the driveshaft is chrome. Tires are brand new Coker classic wide whites. Fronts are 5 – 60 X 15 and rears H – 78 X 15. Rims are 15″ chrome inners and painted outers. Chrome hubcaps. Side mirrors appear to be from a 66′ Chevy. Seat belts are 60’s Chevy. Headers are painted white (paint’s peeling a bit) and are open. Sounds nasty with a lumpy idle. The interior is green button tuck, older, but not cracked. Old sparkle green loop carpet. Interior paint looks like it was light blue at one time. Tachometer does not work. This car has a ton of patina from the chrome to the cracked lacquer paint. This thing is period correct, built during the fiberglass T bucket craze when they were crazy and loud. Fun car, gets tons of looks. Its very comfortable to drive. OK, it’s not a 1926 T-Bucket. It’s a 1923 style T-Bucket, but this is a fairly common confusion that occurs because of how the car gets titled. Traditionally, if you had an old title to a car of the T-Bucket era you could use that to register the T-Bucket you built from scratch. So, some guys would purchase a 1926 or other year title and use it to register their 1923 or 1915 or whatever T-Bucket. (This is a monumentally confusing subject I won’t go into further now. Save it for another day). Jason Sharp takes Richard for a ride and he’s hooked. Jason offers the T to Richard for $12,000, they haggle and Richard returns to the Gas Monkey Garage with a $9500 T-Bucket. The crew enjoys looking at the new Fast n Loud T-Bucket and most seem relatively unfamiliar with T-Buckets in general. The big question on everyone’s mind that sees it is “why does it have such a weird forward tilt?” Long story, short: it was a bit of a fad in the 1970s and my earlier post goes into that further. How it got that way is because the frame has no rear kickup and the rear quarter-elliptic springs are mounted to point down from the frame rails at about a 30 degree angle. When the T-Bucket goes into the Gas Monkey Garage they treat it to a much needed tuneup and add new chrome valve covers, headers and a Caddy style air cleaner. In previewing next week’s episode, Richard asks $15,000 for the Fast n Loud T-Bucket. Not a bad return for investing a few hundred bucks, but it’s met with snickers. We’ll see what else happens next week.