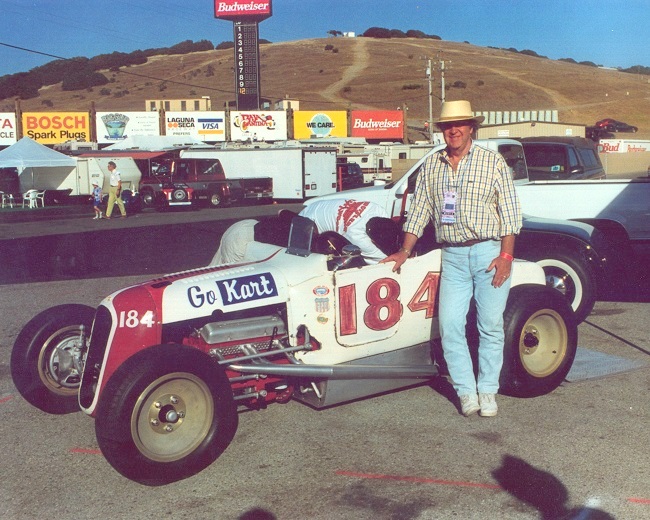 I learned yesterday that legendary automotive journalist, Brock Yates, after suffering with Alzheimer’s for the last 12 years, succumbed at the age of 82.

Brock began his career as an automotive journalist in the 1960s, became editor of Car and Driver magazine, later joining Motor Trend and also founding the Cannonball Run and One Lap of America events.

At that time in my life, however, those automotive publications were too sophisticated for my hot rod tunnel vision. Most of my Brock Yates exposure was during the lean years of auto racing on television when he was the go-to pit reporter or commentator on NASCAR, Diamond P’s coverage of NHRA, American Sports Cavalcade and other races for CBS, TNN and Speed.

But Brock Yates left an indelible imprint on me 12 years ago when I received as a Christmas present his book, The Hot Rod: Resurrection of a Legend. Never before had a read such a lovingly detailed chronicle about anything in the hot rod genre — and it was about a “Ford T-Bucket built from second-hand parts in the back of a garage by a mechanic from Pasadena named Frank ‘Duffy’ Livingstone (which) was one of the hottest rods in the West.” If there might be any doubt about that statement of Brock’s, take a look at the photo above of the backyard-built Duffy Livingstone Eliminator going wheel to wheel with a Ferrari 250TR at Santa Barbara, California in 1959. It was this underdog hot rod ingenuity and grit that made such an impression on the young sailor, Brock Yates, while stationed in California that four decades later he bought the Eliminator, had it restored and wrote its history.

The book’s opening paragraph sets it all up and Brock takes the reader on an incredible journey covering the inception of what would become the Duffy Livingstone Eliminator to its acquisition, restoration and onto the next generation Eliminator.

Perched on an open trailer in a Denny’s parking lot outside Monterey, California, was a car that I have known about for over 40 years, had owned for nearly a year, and yet had not laid eyes on since the summer of 1956. Its presence was unique and unmistakable: a blocky, barebones body, stark white with red trim, on chunky, unfendered wheels, and, most riveting of all, with a bold number ‘184’ painted in blaring red on its battered flanks. This was the Duffy Livingstone Eliminator, about to return to the public after hiding out for decades in various southern California and Arizona race shops, garages, barns and storage spaces. Once one of the most notorious southern California road racing hot rods, it had surfaced in a 1996 issue of Hemmings Motor News … I had purchased it, sight unseen, from across the continent and then waited while it was restored …Now it was ready for an uncertain debut in the most prestigious vintage-car race in North America, the Monterey Historics at Laguna Seca.

I highly recommend The Hot Rod: Resurrection of a Legend. It’s a great read and has many historic photos of the little T roadster and its exploits.

Unfortunately, after Brock had suffered Alzheimer’s a decision was made to sell the Duffy Livingstone Eliminator at the 2013 Mecum auction in Monterey, California. It was put on the block with a catalogued estimated sale price of $175,000 – $200,000. The following catalog description and photos will show you what a treasure the Eliminator truly was and why it was so meaningful to Brock. Sold to Duffy Livingstone and raced in SCCA C-Modified and Formula Libre.
Purchased by Yates in 1996 in partially restored condition from Tom Murphy of Phoenix.

The restoration was finished by Pete Chapouris of SoCal Speed Shop.
Prepared for the 1997 Monterey Historics with assistance from Duffy Livingstone.
Road Racing Hot Rod Class winner at the 2003 Pebble Beach Concours d’Elegance. Although legendary automotive writer Brock Yates has long been associated with the Eliminator, before he bought the car in 1997 his only contact with it was as a young Navy recruit watching sports car races at Montgomery Field near San Diego in 1956, by which time it was a fixture in California sports and oval track racing. It was rendered obsolete before it was completed when CRA short track rules were changed to allow tube frames, and Chamberlain sold the rolling chassis to Frank “Duffy” Livingstone, who with his partner Paul Parker installed a Ford flathead V-8, Cadillac 3-speed and Bendix-style front brakes to race it as a sports car. In 1956 Livingstone’s muffler business was thriving, and he replaced the ancient flathead with a new 265 CI small block Chevy, which engine builder Tim Timmerman built up and hooked to a Borg Warner T-10 4-speed. Running in both SCCA C-Modified and Formula Libre, the Eliminator began competing with and besting much more modern machinery driven by America’s top drivers. Its crowning moment came at the 1959 Los Angeles Herald Examiner International Grand Prix at the Pomona County fairgrounds, where it qualified 19th in a field of 57 cars, drew as high as 8th and finally finished in 11th against such stars as Carroll Shelby, Ken Miles, Dan Gurney and Phil Hill, all driving the newest European exotics. By 1960 Livingstone had established the Go Kart Company to answer the booming new karting craze (ergo the prominent Go Kart logos on the Eliminator’s engine cover). He placed his aging hot rod in storage and eventually sold it, after which it passed from one shop to another over more than 20 years, most of that time in the dry Arizona climate. In 1996 Brock Yates found the car advertised in Hemmings Motor News. He quickly purchased the partly restored car from Tom Murphy of Phoenix and turned it over to Pete Chapouris’ famed SoCal Speed Shop. With generous assistance from Duffy Livingstone, SoCal performed a minimal restoration to prepare the Eliminator for the 1997 Monterey Historic Automobile Races, where its brilliant showing against period Ferraris and other exotica garnered the Chopard Award for Best Performance. The Duffy Livingstone Eliminator was subsequently upgraded for vintage competition by Riter Restoration in East Rochester, New York, while maintaining such details as the old USAC and NHRA decals and the front brake scoops formed by slicing a Japanese WWII army helmet in half! After several years on the vintage racing circuit the Eliminator was retired to the show circuit, scoring yet another major achievement when it won its Road Racing Hot Rod class at the 2003 Pebble Beach Concours d’Elegance with collector-restorer Barry Brown at the wheel, Duffy Livingstone in the passenger seat and Yates perched on the old racer’s still-dented rear deck. Bidding on the Duffy Livingstone Eliminator rose to $140,000 before stalling below the car’s reserve price. If it had sold for $140K it would have represented the lowest price ever paid for a Pebble Beach class winner.

Brock was the author of some 14 other books, including Cannonball!: World’s Greatest Outlaw Road Race, and Outlaw Machine – Harley-Davidson and the Search For the American Soul. Brock also co-wrote the script for the popular Smokey and the Bandit II movie. The Brock Yates Tribute Fund through the Alzheimer’s Association was created in 2013 to raise money and awareness of this fatal disease. Contributions to this worthy cause that potentially impacts a large portion of the population may be made at the Alzheimer’s Association.