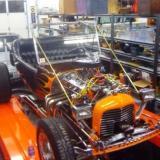 Not too long ago, this interesting YouTube video response was received to a video we had posted earlier.

Well, I enjoyed looking at this handsome T-Bucket in the video and something kept nagging at me that it looked vaguely familiar. A few days later, I picked up my all-time favorite issue of Rod & Custom magazine, the January, 1974 special T-Bucket issue — and there it was!

Of course, a few changes had been made in the intervening years, like the flames, the more modern headlights and the winged radiator cap (which replaced the dog bone one). But, several unique build features stood out in the small R&C photo to identified this as the same T-Bucket:

I contacted Mike and he quickly also identified the leather strapping that outlines the back of the radiator shell as being the same, as you’ll see from the photo Mike sent in response: Mike went on to add the following insight into this cool T-Bucket that he’d like to learn more about:

I believe I’m the 3rd or possibly 4th owner and have had the car since 2003. It was supposedly built in Portland, Oregon in 1968 and its first street registration wasn’t until 1970. It was supposed to be a well known builder who participated regularly in shows throughout the country. I have tried title searches etc. to no avail to track down the original owner & builder.

I’m hoping someone can help identify the car perhaps by the Pinstripe style and detail or Crab flames. It runs fantastic and goes and stops incredibly straight. I suspect it’s equipped with early Mustang disc brakes. I love the 4 speed and the fact that the steering wheel is properly angled and well positioned through the firewall unlike so many with right angle columns which make you feel like you’re driving the cup and saucer ride at Disneyland. The original steering shaft was a flex cable that snapped at speed while negotiating an on ramp last summer, almost making me part of a bridge on I-5 but being quick on the clutch and brakes I brought it to rest against the guardrail with only a little tire burn.

It had a top at one time as the hardware is all there. (I’d love any leads on purchasing a nice top and bows etc.)

Older Hot Rodders at the car shows have stopped and pointed out the hard to find vintage touches like the Bulldog style front leaf spring suspension and the old style properly done diamond tuft upholstery. I have been torn as to have it totally restored as the paint is starting to crack in some places but most people concur that I should keep it original. I’ll probably buy another later built “T” to drive more often and keep this one primarily for show as I want to keep it in vintage condition for as long as possible. Any info at all will be greatly appreciated and I thank you for allowing me to share it with you and your supporters.

OK, guys and gals, take a look at these photos of this swell looking T-Bucket from the 60s and if you know anything about it let us and Mike know. So, were any of you Northwest hot rodders around back in the late 60s/early 70s when this T-Bucket was making the rounds? Let us know. Thanks.

2/11/11 Update: Wouldn’t you know it? After spending some time looking over the new pics Mike sent of his T-Bucket, I recently picked up the same 1974 issue of Rod & Custom magazine and there was another photo in a different section of their T-Bucket coverage. This time, the unmistakable rear view which they likened to the buckets of Grabowski and Ivo. Pretty good company and a pretty cool car!

3 thoughts on “What Do You Know About Mike’s Unrestored Survivor T-Bucket Built in 1968?”