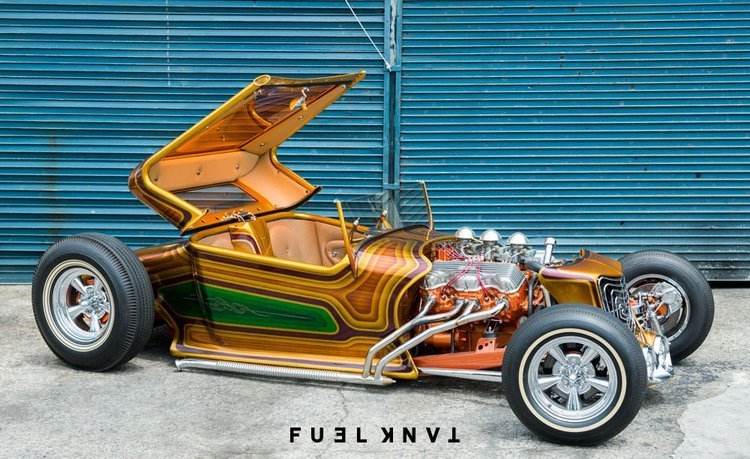 The first time I caught a glimpse on the web of the radical 1927 Ford Model T roadster known as the Galaxian I was hooked. It was not terribly surprising to learn it was built in Japan by Junichi Shimodaira because it followed in the wild custom vein of his “Rod Riguez”, which I had the pleasure of seeing in person a few years ago at the El Segundo Main Street Car Show.

When I recently saw an excellent story on the FuelTank blog about Junichi, his Rod Riguez and the awesome Galaxian with some of the best photos I had seen of the wild 1927 Ford Model T roadster I knew I wanted to share it with our readers here at TBucketPlans.com.  Our sincere thanks to Craig Metros, Luke Ray and the FuelTank crew for allowing us to share this great story with you. If you enjoy this as much as I did then you’ll want to pay special attention at the end of this post to how you can follow FuelTank’s cool stories. Paradise Road, outside of Nagoya, is a full-service hot rod, custom and lowrider shop owned and run by Junichi Shimodaira and is unlike any of the other custom shops we visited. The shop’s interior is a visual explosion of ‘50s and ‘60s Americana including signs, photos, posters, toys, car parts, and cars that Junichi purchased and collected over time from various American swap meets and car shows. Upstairs above the garage area is a jam-packed retail shop full of new and new old stock parts, accessories, collectibles, magazines, T-shirts, and stickers. Paradise Road gets its name from the film, American Graffiti. Those who love that classic movie from the 1970s will remember the climactic scene in which John Milner (Paul LeMat) in his yellow five window deuce, drag races Bob Falfa (Harrison Ford) in a black ’55 Chevy on Paradise Road. “I have watched American Graffiti more than a hundred times,” Junichi confesses with a smile ear to ear. It’s obvious he is a huge fan as hints of American Graffiti are found on the walls and in display cases as I walked through the shop. If that isn’t enough, the name of Junichi and his friends car club is none other than the Pharaohs. Junichi opened his shop in 1987 and was selling American toys, antiques and old car parts. As his business grew and Junichi acquired more car parts to sell, he eventually started customising cars. “I loved the style of show cars that were built by George Barris and Darryl Starbird in the ‘50s and ‘60s,” explains Junichi. As I walk around the shop and admire a few in-progress cars, that inspiration is evident. The L.A. lowrider culture is also a huge influence from Junichi’s countless experiences in Southern California. In 2002, Junichi started a ground-up hot rod build based on a 1930 Ford Model A Tudor. Known as Rod Riguez, the heavily modified Model A Sedan that resembled a show rod from the ‘60s made its debut at the 2003 Mooneyes Show in Yokohama and put Junichi and his Paradise Road shop on the map. After Yokohama, he tore down the car and completely rebuilt it. Additional modifications included a unique wedged chop. The rear of the roof was left at stock height, while the A and B pillars were cut down at staggered heights to achieve a raked roof line. Junichi hand-crafted uniquely sculpted fenders without running boards. A new nose, incorporating canted quad headlamps, was made from ’59 Cadillac front bumper ends, round tubing and more hand sculpted sheet metal. In 2005, Junichi shipped Rod Riguez to the U.S. so he could enter it in the 2005 Grand National Roadster Show, and drive it to the 2005 Cruisin’ Nationals in Paso Robles. The car attracted attention everywhere it went in Southern California. After many inquiries, Junichi sold Rod Riguez to Chuck Schauwecker of Carson, California. In 2006, Junichi began his second ground-up build that would become the Galaxian. Based on a 1927 Ford Model T roadster, the overall look is psychedelic ‘60s show rod meets L.A. lowrider. Like the Rod Riguez, Junichi built the Galaxian twice. The first version of the car ran topless and sported a solid gold paint job. The hinged top and multi-layer metal flake paint was part of the the second iteration. The Galaxian was on display just inside the shop entrance. I could clearly see the aesthetic connection between Junichi’s outrageous creation and the overflowing eclectic environment it was produced in. Though I have seen the car countless times on the web, standing next to it, hearing it, and watching it tear down the road is a whole other experience. Meeting the happy, multi-talented, and very humble builder, completed that experience. I could see much of Junichi-san’s character and humour in the car. As soon as we arrived, Junichi was quickly moving tyres, signs and other bits of memorabilia that surrounded the car and had it outside in no time. Always with a huge smile, he lit up the tyres every time Luke requested a reposition of the car during the photo shoot. The 348 cubic-inch motor that came out of a ’59 Impala sounded great and spun the rear tyres effortlessly. As we were wrapping up the shoot, we realised the combination of intense sun and heavy humidity had taken its toll on us. “You came to Japan at the wrong time of year,” Janichi announces with a chuckle and his permanent smile. Once Luke had finished the shoot, Junichi fired up the 1927 Ford Model T roadster Galaxian one last time, and did a burnout on it’s way back into the shop. Before leaving, we made a few purchases in the retail shop and Junichi gave us posters of the Galaxian. We all stood in front of Paradise Road for a final group shot and then it was time to depart. Until we meet again Jun! Our thanks again to the FuelTank crew for letting us share the story and photos of this awesome 1927 Ford Model T roadster with you. To see more of their great work, be sure to check out the FuelTank blog. To get even closer you’ll want to download the Fuel Tank app. And for lovers of high quality magazines, their Fuel Magazine®, published three times per year, is a publication focused on automotive culture, the people who live it, and the machines that they build. If you’re into two wheel action then you’ll also want to check out their Tank Moto® magazine. Although based in Australia (hence some of the funny spelling above), their vision and coverage is truly global. But it gets even better when you check out all the cool videos on their Fuel Tank TV.