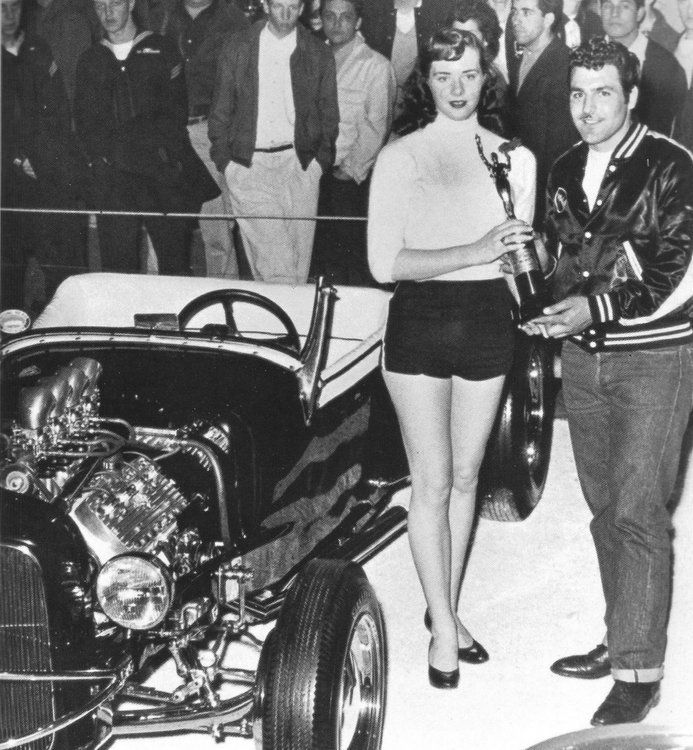 Last month, a third generation California Central Valley raisin rancher passed away at the age of 90 and the hot rod world was saddened. Michael Gejeian was born in 1926. But, from the 1940s on he was simply known as “Blackie” as a result of the highly influential 1926 T roadster he built. Following his interment, “A Celebration of the Life of Blackie Gejeian” was held at his home town Fresno Convention Center.  We felt it appropriate to also publish our memorial to Blackie Gejeian and the huge influence he had on the development of the T-Bucket world we know today.

After enlisting in the Navy and serving in World War II, he returned to his family farm in 1945 with a burning desire to build the fastest hot rod in the San Joaquin Valley, at the age of 19. Starting with a 1934 Ford frame and hopped up flathead engine he found the remains of a 1926 Ford body that he fashioned into what is known as a “California modified” roadster. A California modified is basically just the bucket of a Model T runabout or front part of a phaeton with no turtle deck or pickup bed. The only thing behind the bucket being a fuel tank. Blackie’s T roadster was stripped to the bare essentials to save weight and help meet his goal of being the fastest. As Blackie said to Dick Martin in a 2008 Rod & Custom magazine story, “I still call myself the King of the Rat Rodders … I built a rat rod in 1945; built it to race, not for show.” As evidence of that fact, he used his Navy blanket for the cheap, simple light weight upholstery. The car was painted black and Blackie started wearing black. During the 1940s Columbia Pictures happened to be producing a popular series of “Boston Blackie” detective movies. Painting the car nickname “Blackie” in gold letters on the cowl gave rise to Mike Gejeian being known as Blackie Gejeian from that point forward. Blackie’s roadster earned its reputation as the fastest in the San Joaquin Valley. At least in the Southern part. Some 110 miles North in Modesto another hot rod legend, Gene Winfield, held that reputation with a 1927 T roadster. Unfortunately, the two never met in head to head competition. In 1948, Blackie ventured 250+ miles South to run his roadster at the El Mirage dry lake bed. While pre-staging for his first run, he was T-boned by a car returning to the pits in a hurry and the roadster was cut in half. Blackie ended up going to the hospital on a sheet of plywood laid across the back of a convertible.

After recovering from the crash, and having had two friends killed going to El Mirage in the previous two years, Blackie decided to rebuild his roadster with a focus more on appearance than all-out speed.

The 1934 Ford frame, which had been cut in half in the El Mirage accident, was boxed for additional strength in the rebuild while gaining a more pleasing appearance compared to the stock open channel version. The formerly ratty ’26 T body, which had been trimmed 6 inches from the bottom, was cleaned and straightened. To look even more sleek it was welded and smoothly leaded to the frame, thus producing the first unibody hot rod. But that wasn’t Blackie’s only hot rod first. As a very fortunate coincidence, a friend of Blackie was starting a chrome plating shop, but had no experience actually doing chrome plating. He asked Blackie if he had any parts he could work on and the first chrome plated experiment, Blackie’s Ford rear end, was successfully shiny. The friend wanted to continue to build his chrome plating skills and Blackie was more than happy to oblige with more front and rear suspension components, headers, nerf bars, etc. Previously in hot rod shows the only undercarriage treatment one might receive was a thorough cleaning or paint touch-up. Blackie had the first hot rod chromed undercarriage. Along Blackie’s eight year build process he won trophies in shows in Fresno, Paso Robles, and other venues. The car and its chrome chassis were a hit at the 1953 Oakland Roadster Show, which hosted the America’s Most Beautiful Roadster competition back then. Blackie decided to exhibit this unique feature by draining all of the fluids out of his T and every alternate hour during the show with his friends he would pop the passenger side hubcaps and roll the car over on its side so that awestruck show visitors would be treated to a never before seen sight. This began Blackie’s showmanship bonafides and earned his T the nickname of Shish Kabob Special for its “man”ually rotating display.

Taking nothing away from Blackie, I can’t help but think that his unique roadster display technique may have been inspired by a Jeep ad in the “Saturday Evening Post” back in 1946. 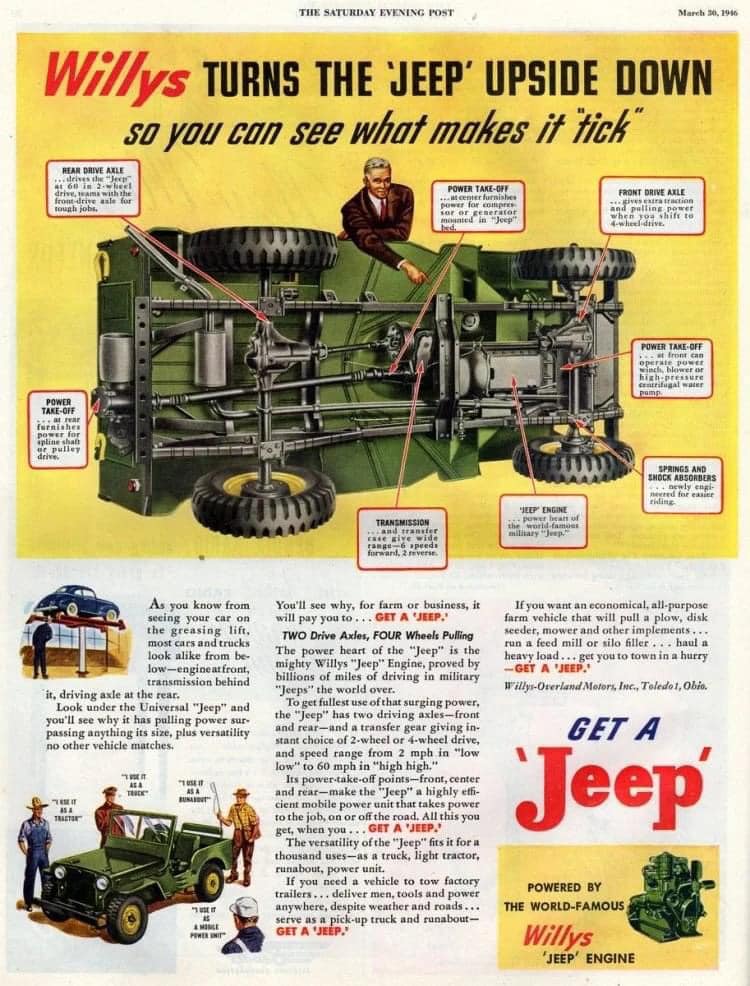 (It wasn’t until 1958, when Blackie and friend Richard Peters were displaying the Ala Kart, which would win the AMBR award that year and the next, that being too heavy to flip over Blackie “borrowed” the long wall mirror from the women’s washroom to put under the pickup to display its undercarriage. Another Blackie first: mirror under a show car.) Despite being the most popular display at the Oakland show in 1953, Blackie only came home with a small trophy for “Originality — Rod Construction, Third Place”.  There was still more work to do for Blackie. Success came in 1955 when Blackie’s Shish Kabob Special won the prestigious America’s Most Beautiful Roadster trophy. By that time it sported a chromed transmission which was exposed in the passenger compartment along with a modified 1932 Ford dash with a full complement of Stewart Warner instruments. However, competition was very tough that year and the show judges declared dual winners of the award. Blackie had to share possession of coveted nine-foot-tall trophy with the ’27 T roadster built by Ray Anderegg. What’s important, though, is that what started out as a “rat rod” in 1945 was named America’s Most Beautiful Roadster ten years later.

While the late Norm Grabowski is credited as the “father of the T-Bucket” with his Kookie Kar, there is no denying the fact Blackie Gejeian’s Shish-Kabob Special also had a strong influence, not only on Norm’s initial T-Bucket build, but many more that have followed.

In building his legendary T-Bucket, Norm Grabowski started with a 1931 Model A chassis. He then removed the rear crossmember, whacked some 20 inches off the rear of the frame rails and then mounted the crossmember on top of the frame rails. He topped the chassis with the Cadillac engine with a shortened 1922 Ford Model T touring body for a nicely raked “California Modified” in the style made famous by Blackie’s Shish-Kabob. Only later when Norm’s friend, Ted Worobieff, suggested that he add an extremely shortened Model A pickup bed did Norm think that might also look cool and the T-Bucket we know today was born.

In transforming his stripped down for speed “rat rod” into the eventual America’s Most Beautiful Roadster winner Blackie did something revolutionary. It was akin to the hot rod equivalent of the Hans Christian Andersen fable about the ugly duckling becoming the beautiful swan.  But, what was more dazzling is that Blackie’s T never lost its competition spirit. It still looked ready to take on any and all challengers with its quadruple-carbed, bored and stroked flathead, except the engine block was now a pristine white and every removable exterior component had been chrome plated.

Blackie’s choice of the ’37 Ford tubular axle was in keeping with his need for speed because it was 15% lighter than the equivalent I-beam axle and thus was also a very popular choice for sprint car builders in the day. His mating it to 1940 Ford hydraulic brakes was a huge safety improvement and it looked great, too. It’s probably not just coincidental that after Norm Grabowski started his T build in 1952 that he also made the same choice of a ’37 Ford tubular axle equipped with ’40 Ford hydraulic brakes. A few years later, Tommy Ivo made the same choice for his equally influential T-Bucket front end.

Having been built as a lightweight rod from the get-go, Blackie’s T wasn’t subject to California’s fender requirements for cars over 1500 pounds. That made it rather unique in terms of street rod appearance. Most T’s of the time on the street sported fenders and hoods, as well as turtle decks. The fenderless look also drove Norm and TV Tommy in their T-Bucket builds.

Of course, the competition look of Blackie’s engine also was followed by Norm with a supercharged Caddy and later four deuces, as well as by Tommy with six deuces and later Hilborn fuel injection on his nailhead powered T-Bucket.

While Norm didn’t have a buddy to provide chrome for kicks and practice, he did use as much chrome as his budget allowed and tasteful paint elsewhere. Tommy Ivo did the same. Likewise, by 1955 Blackie’s T sported a beautiful interior with full instrumentation, a look that was also followed by Norm and Tommy. It’s undeniable that Blackie’s T had a strong influence on both the Grabowski and Ivo T-Buckets which were the prime influences for all those that followed.

Not only was the work of Blackie Gejeian hugely influential on the development of T-Buckets, but also Blackie was a lover of T-Buckets himself, as attested to by his personal car collection.

Of course, for a perfectionist like Blackie just any old T-Bucket would not do. To be acquired by Blackie it had to be a T of style and unique distinction. Take a look. The Jim Molino, Candy Man 1923 T-Bucket, based on an Andy Brizio Instant T. The Mike Haas Mod Rod T-Bucket, built in 1972 and featuring a rear section grafted from a 1969 Corvette.  Featured on the December, 1972, cover of Street Rod magazine. The Dan Woods 1915 T-Bucket built in 1972 for Bill Block. Featured in the Dain Gingerelli book, The Hot Rod.

Just a few of Blackie’s other accomplishments

Blackie’s attention to detail and love of custom cars led to his establishing the most unique custom car show ever. Established in 1958, the Sacramento Autorama was unique because it was an invitation-only car show, with each car personally selected by Blackie. It became an incredibly prestigious event and was held annually for 51 years, ending only when it became too difficult for Blackie to physically manage everything in the perfectionist manner he had established.

In addition to being a successful dirt track racer, Blackie managed the Clovis Speedway for 20 years and owned the Fresno Dragway for 18 more. There, Blackie initiated 4 lanes across heads up drag racing featuring front engine top fuel dragsters almost 50 years before it was ever considered at Charlotte.

Blackie’s 90th birthday was celebrated at the Fresno Convention Center just a few months before his passing and it’s heartwarming to see how his glowing personality came through at a time when he was quite ill. As a farmer, hot rod builder and collector, dirt track driver, car show and race track promoter, Blackie Gejeian was a lot of things to many people. But to me Blackie will always be the T-Bucket hot rod “World’s Most Interesting Man”.