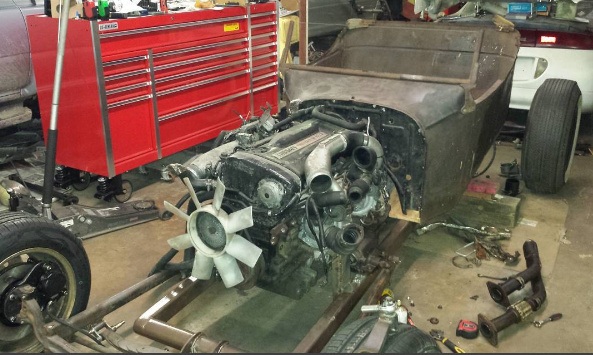 If you’re like me, chances are you’re thinking, “Huh?” Well, it turns out the RB26 engine is a 2.6 liter inline-6 cylinder engine manufactured by Nissan, for use primarily in the 1989-2002 Nissan Skyline GT-R, which costs more than a Porsche 911. It looks like Cody’s Nissan Skyline T-Bucket will have the RB26DETT variation of the RB26 engine. What’s that, you say? The RB26DETT engine block is made from cast iron, and the cylinder head is made from aluminium. The cylinder head contains 24 valves (4 valves per cylinder), and uses a dual overhead camshaft setup. The intake of the RB26DETT varies from other RB-series motors in that it has six individual throttle bodies instead of a single throttle body. The engine also uses a parallel twin turbo system. The turbo system is arranged so that the front turbo is powered by the front 3 cylinders, and the rear turbo is powered by the rear 3 cylinders.

Sounds pretty awesome. But then I see the engine is rated at 276 HP?! And then I find out (shades of the muscle car era) that’s because of a “Gentlemen’s Agreement” made between Japanese automakers to limit the “advertised” horsepower of any vehicle to 276 HP.  And the RB26 is widely known and became quite popular for its strength and power potential, making it a modification friendly platform for tuners and aftermarket modifications. And then I learn that, “It is common for modified engines to achieve outputs of 500 hp+.  Some of the most extreme and extensive modifications done to the RB26 have resulted in figures of 1000 hp+!!” “I love Skylines so it was a fun choice. My first car was a ’72 240Z and those Nissans just have a great sound done right.,” said Cody. So enjoy today’s video below as Li’l Mayhem is getting her final fitment, motor and trans mounts made, and floor getting fitted to the GT-R 5 speed transmission. Next up body going on her.

In the next installment Li’l Mayhem will be getting final exhaust and steering box fitment, then brakes and radiator and she will roll out. I’m keeping my fingers crossed.