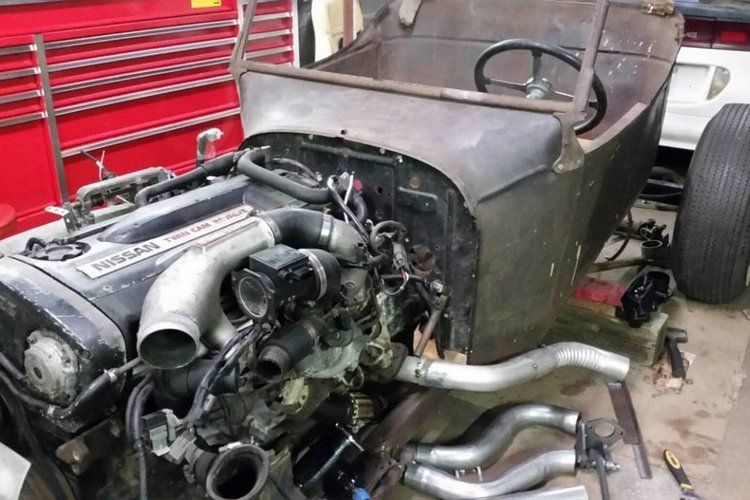 Unfortunately, it wasn’t possible to get his steel-bodied rat rod Nissan RB26 T-Bucket project completed, rolling and licensed in time to make the 20th anniversary Cruisin the Coast last weekend in Gulfport, Mississippi. But that’s really not too surprising since Cody’s building the first Nissan RB engine powered T-Bucket ever. But why do that, you ask? Well, a few years ago in an article about “The Best Crate Motors On Sale” Jalopnik said, “If you don’t think you want a perilously expensive ($17K – $30K) straight-six that can be worked into four-digit horsepower numbers, slap yourself.” Combine that with the fact Cody’s first car was a Nissan Z and that he just happened to be lucky enough to acquire a super-rare Nissan RB26 engine and you start to see why. Considering that the RB26 can be made to produce 500+ horsepower fairly easily it starts to make sense. Also, as these photos show, it’s possible to turn a sophisticated engine with lots of wires, hoses and tubing into something that can be a stunner in an open-engine hot rod like a T-Bucket. It’s not anything like your typical American-made V8 installation. For instance, one of the hangups incurred had to do with room to mount not only the radiator, but also the intercooler for the dual turbos. Then after deciding to use wider tires it turned out that the integral headlight stands/shock mounts presented an interference problem. And a last minute steering box change had to be made due to other clearance issues. If that wasn’t enough, Cody discovered that the 300ZX transmission didn’t easily mate up to the Nissan RB26 engine. But, hey, a first is a first and when this Nissan RB26 T-Bucket finally hits the road it will absolutely draw a lot of attention — and expose the fun of T-Bucket hot rodding to a whole new generation of “tuner” fans.

So, click on Cody’s update video below to learn more about his progress with Li’l Mayhem as he so appropriately has named his project.

You’ll see that there are just a few more details to complete and things will be ready to go with all the on board wiring and plumbing completed.

Li’l Mayhem’s first test turnover! A little more wiring and she will be ready to fire up!! Progress is also being made fabricating a custom exhaust. So stay tuned because I’m sure the end result is going to be something special.