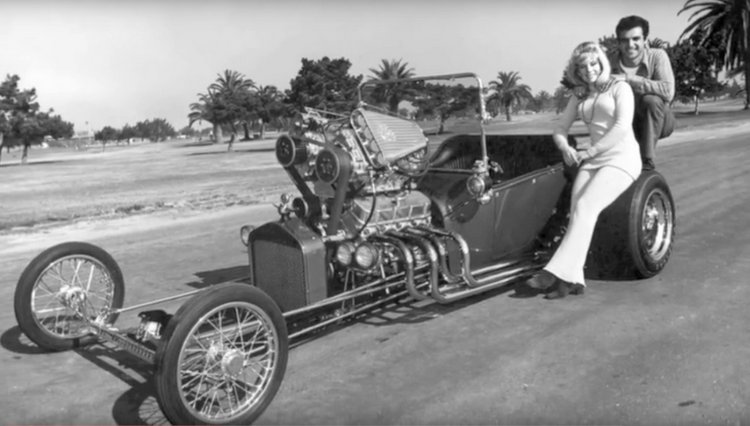 The long wheelbase T Bucket era began in the late 1960s. Two factors contributed to the long wheelbase T Bucket fad. The first factor was the growth of drag-strip inspired street machines: from gassers to altered wheelbase funny cars to dragsters. The second factor was by that time T-Bucket hot rods were quite numerous and it was only natural for builders to look at different approaches to building a unique Fad T. As a member of the San Diego Prowlers Hot Rod Club, Joe had already built what Hot Rod magazine called, “One of the kookiest kooky kars in Southern Cal.” It was featured in most of the magazines of the day as well as movies and you can see our feature about it here. But Joe’s awesome Dodge bucket wasn’t just a showpiece as you’ll note from the above pic. In fact, after experiencing success with his street-strip-show car the young San Diego fireman decided to go all in on a T-Bucket bodied 1320 project. Joe built a truly innovative and extremely versatile injected Chevy powered rail job with three interchangeable bodies: dragster, T-Bucket and Fiat Topolino. On any given day, he could run it in the Dragster, Modified Roadster or Fuel Coupe class. Of course, he also had the hottest looking push car going! Joe broke 6 National Speed Records and 2 World Records with his dragster “Little Miss Carriage”, so he was well-equipped to build a long wheelbase T Bucket for the street.

If you’d like to see more of “Little Miss Carriage” you’ll really enjoy the nice video tribute above put together by Bill Pitts, also known as “Mr Cacklefest” having virtually invented the phenomenon after acquiring and restoring the Kent Fuller Magicar. So with that background, in 1967 Joe Pirronello laid out a dragster style tubular chassis for his 131 inch long wheelbase T Bucket. Up front was the look of a T-Bucket with a suicide spring perch and transverse leaf spring, but Joe chose to use a lightweight 1940 Willys axle which has a nice drop already built in. It was located by extremely long 4-bar radius rods that attached to a pair of sweeping, drilled-for-lightness axle brackets. The front 16 inch wire wheels were the product of Marv Hall, whose wheels would later become the well-known Hallcraft brand. They were wrapped with Avon 2.75 x 16 cycle tires. The rear suspension was fashioned from a fully chromed 1967 Corvette independent rear suspension with positraction 4.11:1 gears. The steering was also unique with a sideways mounted 1966 Triumph sports car rack and pinion. Aside from its long wheelbase the most distinctive element of Joe’s T was the massive twin-supercharged big block Chevy engine. And being a San Diegan it was a natural to use Bruce Crower’s 4 butterfly hat injectors on the two GMC 6-71 blowers that were mounted on a one-off manifold Joe fabricated himself. Not to burst any bubbles, but some may wonder when it comes to driving on the street, “How in the world do you prime and start those two big injectors?” Let’s just say that Joe devised a practical and reliable solution to that issue. For his T-Bucket body, Joe chose the 1915 pickup style made by Fibermotive and Merle Rhodes applied the candy red over pearl finish. The opening passenger door is abbreviated by a third not only to clear the headers but also because of the two 6 gallon fuel saddle tanks moulded into the sides of the body. Gas station attendants (remember them?) were said to be baffled when Joe pulled in and they were asked to fill-er-up through the two gallon Moon tank in the pickup bed. As evidence of Joe’s meticulous attention to detail, the T-Bucket body is removable in a matter of minutes with six bolts and one electrical connection.

In the turbulent late 1960s, Joe named his bright red T the “All American” to show his own patriotism and as inspiration for others. He also arranged for his car to be used in exhibitions that would help the San Diego Fire Department raise money for charitable organizations. While Joe’s T did quite well in shows, often winning Best Engine, it was also driven frequently on the San Diego area streets and freeways.

Thanks again to San Diego Fire Department captain Bill Pitts for the above cool video trip through Joe Pirronello’s “All American” album. Joe’s T was so stunning that it was featured in advertisements like the one above for Simoniz wax. Interestingly, another ad it was featured in was for a “lifetime” oil filter that used rolls of toilet paper for the replaceable filter media. Hey, if it could protect a $3000 engine like that then it must be good!? 🙂 In the “Hot Rod Mart” section of the December, 1970 issue of Hot Rod that featured Joe’s T this For Sale ad ran. Quite a bargain at the time for such a distinctively unique long wheelbase T Bucket or street dragster that was capable of winning in just about any show. I understand it ended up 2,300 miles away on the other side of the country and I have it on good source that it’s still intact. I’m crossing my fingers that someday I’ll get to see Joe Pirronello’s awesome T creation in person and will have the opportunity to do an update on it 45+ years later.