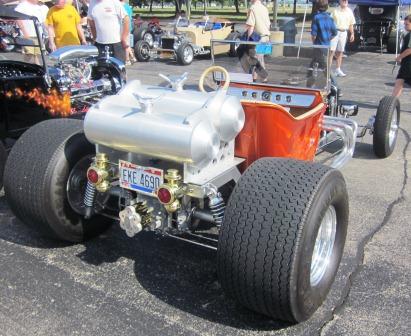 I must apologize for my lapse in 2011 T-Bucket Nationals reports — just too many things going on this summer to keep up with blog posts. I’m determined to make up for it, though, so my coverage will now officially resume with the very unique T-Bucket roadster of Carl Tschopp of Lancaster, Ohio. Carl has addressed two of the biggest dilemmas that have plagued T-Bucket owners for decades. The first is how you finish off the back of the bucket: pickup bed, turtle deck, fuel tank or nothing? The second is what do you do about the driving range of a T-Bucket being limited by a tiny 10 gallon fuel tank? Carl’s truly unique, eye-catching (and practical) solution: two fuel tanks. And none of those skimpy metal bands holding down those weighty-when-full fuel tanks for Carl — he’s chosen to go with a beefy machined aluminum mounting system that not only secures the twin tanks but its design also accents the knock-off style caps on the tanks. While he was on the complementary theme, Carl decided to also complement the black vinyl covers for the modern rectangular headlights with a matching cover for the grille shell (when stationary, of course). By now, you’re probably not the least bit surprised to notice that the air cleaner for the dual quads matches the finned aluminum valve covers. The four-bar spring-behind front end with its nicely dropped axle aligns perfectly with the small block Chevy’s exhaust headers and the drag link from the Corvair steering box. The step plate for easy entry blends in just as well. I really like the unique details on Carl’s T-Bucket; two of which can be seen if you look closely at the above picture of its front end. Know what they are? If you didn’t immediately guess what the two unique, subtle changes were this view better shows them and I’ll tell you. The first is that the front crossmember, rather than being a straight across tube, has been cut and fabricated to a nice forward angled peak. In addition, the front frame rails extend beyond the tubular crossmember and their ends have been taper cut to incorporate ingenius built-in parking lights, with turn signals mounted above them. Looking at Carl Tschopp’s distinctly different T-Bucket, just remember that anybody you hear parroting the old line, “T-Buckets are all alike” is just showing their ignorance of not only the hot rod sport, but also car construction in general.

We know you’ll want to see more “up close and personal” of this cool T-Bucket, so we have a nice 1 min. 40. sec. video on Carl Tschopp’s bucket waiting for you.

You’ll be kicking yourself if you miss this year’s T Bucket Alliance Nationals in Green Bay, Wisconsin, so make plans now to be there. All the info is here>