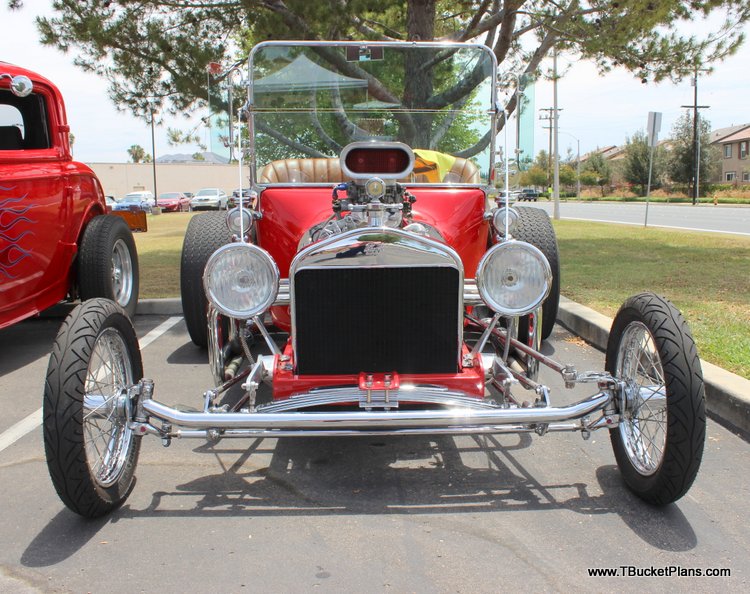 I spotted this 1915 T Bucket at the San Diego Prowlers 68th Picnic and Ol’ Timer’s Reunion and it made my day. First off, it’s rare to see a T-Bucket today without front brakes. That was THE look in the 1960s, but after the magazines started commenting about what a safety hazard it was and eventually chose not to even feature cars sans front brakes the look pretty much disappeared, with a few die hard (no pun intended) exceptions. So, it wasn’t a surprise to learn the owner and builder of this sharp, red 1915 T Bucket had been a San Diego Prowlers member back in the 60s. Ted Hazelwood had a 1915 Dodge bucket back then of the same variety as fellow prowler member Joe Pirronello. Ted is still an old school guy. One look at the super clean front end on this 1915 T Bucket shows how he nicely positioned the tie rod behind and under the front spring, which aligns nicely with the frame and axle. The front crossmember on Ted’s frame is square, rather than the round tube found on most, and it makes for a smooth appearance with the flat front spring perch and the nice mounting brackets for the front friction shocks. Looking from the side you can readily appreciate the light, airy look of the front end without brakes. Also from a side perspective, you’ll notice how the 1915 T Bucket cowl slopes down to a more compact firewall that compliments rather than hovers over the engine. At the rear lower edge of the body is a cutout to provide clearance for the rear radius rods. And if you look closely above them you might detect another of the very unique features on this 1915 T Bucket: torsion bars parallel to the frame rails for a comfortable, clean rear suspension. But, don’t neglect the collector on the chromed headers leading to mufflers under the body to keep engine noise to a reasonable level. Ted likes the through-the-floor steering position that was popular in the 60s and the lower front edge of the body is relieved to allow drag link movement. That notching also provides clearance for an additional master cylinder that’s not for the brakes. Again, another 60s touch. It’s rare today to see a clutch pedal in a T-Bucket, but Ted prefers to make his gear changes the more traditional way and that master cylinder is used to actuate the clutch mechanism connecting the potent Chevy small block to the 4-speed transmission. The wooden dash features a full complement of gauges and the tastefully upholstered front seat has been notched for shifter clearance. The rear wheels and tires on Ted’s 1915 T-Bucket are the perfect 1960s complement to the front wires and if you look closely at the pickup bed you’ll note it has a nice hinged access through the upholstery to the fuel tank. The chromed tailgate hinges are a nice touch and another traditional element is the use of only one carriage light at the rear. By using torsion bars instead of a transverse rear spring, coil springs or coil over shocks the rear of Ted’s T is as clean as the front and with the distinctively different look of the chromed dual exhaust exits. To the unitiated, Ted Hazelwood’s beauty of a 1915 T Bucket is just another red roadster. But, if you know your T’s this one has unique details in abundance and is exactly the type of T-Bucket that I love to see at any event. It’s the little things that mean a lot.