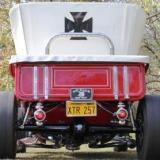 A couple months ago, I blogged about how Joe Pirronello’s “Lively Set” T-Bucket had been restored and was for sale — for $150k. Since first seeing it in a magazine as a teen, this has always been one of my favorite T-Buckets and it was cool to know that it had been restored, although at $150,000 it was being offered for those who had the bucks and temporary loss of sanity and judgement of a Ralph Whitworth to buy it. The restoration was nicely done, but I felt it lacked a few key elements. One of which was the terrific-looking custom fabricated scoop Joe had covering the six deuces when it appeared on the cover of the January, 1964 Car Craft. Granted, before that Car Craft appearance the car had the typical air horn scoops on the Stromberg 97 carbs. By the time it appeared in the 1964 release of The Lively Set (which was probably filmed in ’63) it was sporting the new angular Cal Custom scoops that were popular at that time in the 60s. Another missing element in the restoration was the appropriate car club plaque. If you’re asking top dollar for a restoration it would have been worthwhile to invest a little to get a real San Diego Prowlers plaque rather than the generic J.C. Whitney No Club–Lone Wolf version. But, to me, the biggest restoration omission was the front wire wheels, which were on the car in the movie and appeared on the cover of Car Craft, so must have been put on in 1963. If you’re going to tout its movie car heritage, then why not include the most distinctive element it had in the movie? You can say whatever you want about the lack of front brakes with the wire wheels, but in an upcoming post I’ll cover why that omission was perhaps even more signficant. After all, history indicates this T-Bucket was referred to as a “street rail”. Why such a huge gap between asking and sell price? Here’s my theory:

1. While Joe Pirronello’s 60s-built T-Bucket was dramatically cool looking, won a lot of trophies, appeared in a lot of magazines, etc., it really wasn’t recognized then or very widely now (aside from the Ken Gross/Robert Genat book, myself and the seller) as a hugely significant T-Bucket. 2. Just because a car was in a movie, doesn’t make it that valuable unless the movie was about the car (Herbie the Love Bug, Chitty Chitty Bang Bang, etc. and even then it’s doubtful since clones were built of most movie cars).
3. If you’re going to restore a T-Bucket hot rod roadster, you should restore it to its most appealing, significant look. You can forget what you hear from Gen Xers all caught up in preserving “tradition” that existed decades before they appeared. These cars were hot rods and were forever being changed. 4. And if you’re going to ask top dollar for your restoration, then why not have all the possibilities available for the buyer? For example, all three styles of air scoops that were used or the right car club plaque or, more importantly, the wire wheels.
5. For the time being, fortunately, there are no Ralph Whitworth’s out there with stupid money ready to blow it in disproportionate fashion to pursue a silly personal folly/ego trip — while screwing up the market value of hot rods for the rest of the world. 6. And, of course, it’s also about relative worth. The seller in this case thought he had something that was worth not a whole lot less than a truly significant T-Bucket hot rod roadster like Tweedy Pie, which was another auction disappointment for its seller that I’ll cover separately.

Hey, it’s really not a bad situation. A T-Bucket with history was preserved, the seller got a fair price for it and some lucky buyer got a great deal on a great car. And, $38,500 is almost six times what Joe Pirronello sold his T-Bucket for in the 60s! (With its Candy Burgundy paint and front wire wheels).