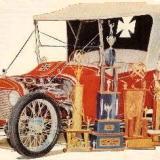 “One of the kookiest kooky kars in Southern Cal.” is how Hot Rod Magazine described Joe Pirronello’s ’23 Dodge T-Bucket in their December, 1963 issue. As a 15-year-old T-Bucket fan, I was awestruck by the overall look and memorably unique details of this hot rod. While Joe may have been inspired by Norm Grabowski’s legendary T-Bucket, he fulfilled his own vision and, man, was it cool. From the Maltese Cross accents on the top and interior rugs to the innovative front spring perch and the super-swoopy custom air scoop covering the 6 deuces on the Corvette mill, this was a car that dreams are made of. Joe’s bucket was so cool, in fact, that it ended up in virtually all the major hot rod magazines and then became a movie star in the teen beach fad film, “The Lively Set”.

OK, it was a very cool T-Bucket, but a couple years later when I saw it in the November, 1965, Car Craft magazine it was complete sensory overload. Joe Pirronello’s T-Bucket had been repainted Candy Burgundy to match the triple-threat fuel dragster Joe owned with partner Mike Shlaes. With quick change Cal Automotive bodies, these guys could run as a dragster, Fiat Topolino bodied comp coupe, or T-Bucket bodied comp roadster, with the neatest push car going! Bill Pitts, also known as “Mr Cacklefest” having virtually invented the phenomenon after acquiring and restoring the Kent Fuller Magicar, has put together some terrific videos on Joe Pirronello and his awesome Dodge, D-Bucket. The first one below, shows its evolution and the variety of intake configurations Joe experimented with.

In the next Bill Pitts video below, he highlights Joe and the car’s appearance in “The Lively Set” movie.

Bill’s next video tribute to Joe and his bucket is a focus on how it was teamed with his record-holding T-bodied dragster.

What’s even cooler is that the car still exists and has been restored and was for sale. If you’ve got a quick $150k, that is. Here’s how it was described in early 2010, when it was first listed for sale: “Driven by Doug McClure in the movie with stunt driving by Mickey Thompson. Featured in Popular Hot Rodding Jan. ’63, Hot Rod Magazine Dec. ’63, and Car Craft (cover) Jan. ’64. Fresh frame off restoration This is a rare opportunity to acquire a piece of Hot Rod history. Mentioned in the Ken Gross/Robert Genat book ‘Hot Rod Milestones’ pg. 50. Built by Joe Pirronello, a San Diego Prowlers member, in the late fifties. As stated in Hot Rod, Joe got the urge to build something sneaky after seeing Norm Grabowski’s and Tommy Ivo’s cars. This car won many awards in its day. Built from a ’23 Dodge touring body, ’28 Model A frame, ’27 Model T pickup bed (widened), Model T grill shell, ’37 Ford V8 60 front end and Ford Banjo rear end, ’40 Ford juice brakes. no glass, real steel.” Seems pretty pricey, but after watching this movie and hearing the car go through the gears I might say it’s worth it. Update 1/22/11: If you want to know how much the Lively Set Dodge T-Bucket sold for, read about it here>