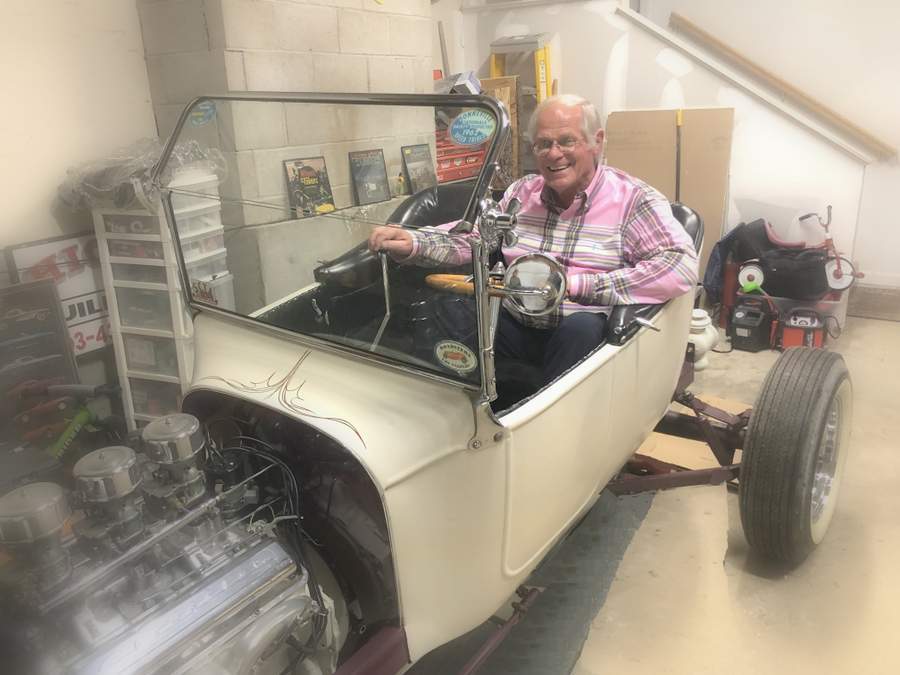 My original Fred Steele roadster post was done back in 2010. When I first wrote it I had no idea that I would be lucky enough to come in contact with the owner of the Fred Steele roadster, Bob Collins. Fortunately, in 2015 I did and I took that opportunity to update and expand upon my original post about this sharp little T-Bucket that was also one of my strong early influences.

Just recently, however, I learned that Bob was ready to let this truly iconic T-Bucket pass along to someone who would maintain its’ legendary looks and hopefully let others see and be inspired by it. I took the opportunity to head up to New England to sit down with Bob to record a new episode all about the historic T roadster for our Hooked on T-Bucket Hot Rods Podcast. To listen to that episode, Click Here>

In 1964, The Ventures, the best selling instrumental rock group of all time (with over 110 million albums sold worldwide and now inducted into the Rock and Roll Hall of Fame) introduced their 14th and possibly most influential album, “The Ventures in Space“. The best-selling album’s alluring cover featured a romantic young couple in a striking white T-Bucket parked high on Mulholland Drive overlooking the lights of the vast L.A. Basin. It was the prototype sunny Southern California image — but who could have guessed that cool T-Bucket roadster had been constructed a few years earlier across the country near frigid Boston, Massachusetts!

At the time, I was just turning 16 and a friend across the street who was a budding guitar player had the album. He played it incessantly, trying to figure out how to play along, and I spent my time staring at the T-Bucket on the album cover and dreaming of one day having just such a T. But enough reminiscing.

Ironically, that bobtail T-Bucket was built by Massachusetts hot rodders Fred Steele and Don Spinney who had been inspired by Norm Grabowski’s “Kookie” T-Bucket. It’s my understanding that Don Spinney did most of the construction on Fred Steele’s roadster.

I was excited to see the Fred Steele roadster featured a couple years later in the February, 1966 issue of Popular Hot Rodding magazine. (In my opinion, it was PHR’s best issue ever because it also featured the iconic 1915 T-Bucket built by Don Oaks and at the time owned by Bob Reisner who would trade it for Dan Woods‘ Milk Truck. If that wasn’t enough, there was also a feature on the fabulous T-Bucket of Fred Marasco).

The PHR editors really captured the essence of this cute, simple T-Bucket by noting,

“You don’t have to be wealthy to own a superior street roadster — just enthusiastic and willing to do your own work.”

I was blown away to learn that the beauty of a T-Bucket that captured my attention two years before had been built in 1960 on a budget of “just over $1000”! Before, it was only a dream car that I’d seen on that album cover. Now, though, it had been revealed to me that it really was possible to build a T-Bucket on a budget. So let me try to explain the unique allure of the Fred Steele roadster through these photos provided by its current owner, Bob Collins. It’s pretty much the same as it was when it was built more than a half century ago. And the Massachusetts snow covered background is perfect for what I originally thought was only a California dreaming car.

The first thing you’ll notice is that there is very little chrome used on the car. However, where it is used like on the wheels, valve covers, air cleaners and windshield frame gives the biggest bang for the buck. The simple, economic icebox white and maroon paint finish work together perfectly. The overall awesome “look” of the T comes from what’s known as the California rake embodied by the looks-fast-sitting-still rear-up, nose-down stance of the T. Whether or not that was the objective, it’s what happens when you mount a T body on a Model A frame with a dropped front axle and you don’t kick up the rear spring crossmember. That look is further accentuated when you shorten the frame rails over a foot to achieve a nimble 90″ wheelbase.

In the photo above you’ll also note the distinctive look of an original steel T-Bucket body because of the rear frame cover panels. With the exception of the Almquist T-Bucket bodies, virtually all of the fiberglass T-Bucket bodies built since Cal Automotive introduced them used a rolled rear pan.

Of course, the Model A frame was also narrowed to fit within the smaller Model T cowl. Not going with a suicide style front axle and sticking with the Model A frame horns in front of the axle is one more distinctive factor in the unique appearance of the Fred Steele roadster. In keeping with a true budget build, Fred used a 1956 Chevy 265 cubic inch engine, which was a bargain back then because of the greater demand for the larger 283 and 327 displacements. Sticking with the dime-a-dozen stock rams horns exhausts was another nice looking, yet low-buck, move. Keeping the exhaust within the confines of the frame rails by using baffled pipes also contributes to the clean overall lines of the car, which accentuate its simplicity. Although it was originally outfitted with the then popular 1956 Ford steering wheel, today the Fred Steele roadster sports a wood-rimmed Model T wheel. According to Bob, Fred thought the newer wheel looked great but it was bigger than the T wheel and made it difficult to get in and out of the T. Fortunately, Bob still has the ’56 Ford wheel. The tasteful black Naugahyde upholstery that is the perfect complement to the white body was done economically in Tijuana after Fred had moved to California to live from 1962 to 1964. If you’re building a bobtail T-Bucket with a lot of rear axle visibility you’ll do well to have something interesting to look at. Fred and Don knew that and went with a Columbia two-speed rear axle, which was introduced in the 1920s as an aftermarket solution to more pulling power and faster starts as well as a higher ratio overdrive gear when at speed. It was later introduced by Ford in 1934 as a conversion option fitted to the original banjo style rear end. I’m a big bobtail T fan, going back to my Bob Johnston Tweedy Pie and Marty Hollmann T-Bucket influences. So, I really dig the simple rear look of Fred’s roadster with it’s original Model T gas tank mounted above the rear crossmember and flanked by the nostalgic carriage lights. It’s not only a functional, clean look, but also a cool way to build a T-Bucket on a budget without the extra expense of a pickup bed or turtle deck.

Shortly after building the car, Fred moved to California and stayed just about long enough to join the exclusive L.A. Roadsters car club and have some photos taken of his bucket by hot rod journalist Tex Smith before returning to New England. 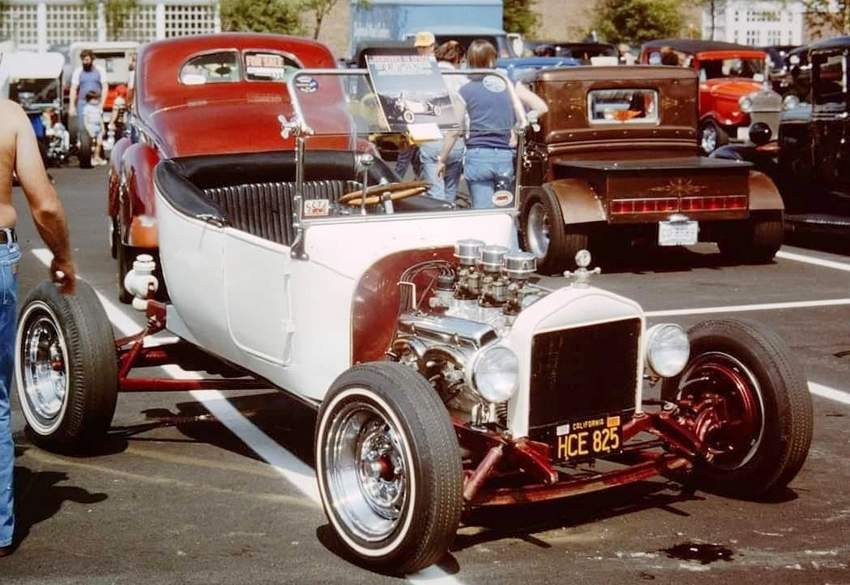 In addition to scooting down to Tijuana to get his upholstery done, Fred was lucky enough to get those cool chromed wheels from fellow L.A. Roadsters member, Walt Kaline. It so happened that Walt owned Luster Chrome Plating and had plated two sets of the wheels and used one set on his own T-Bucket.

They weren’t just any old steelies that somebody took a hole-saw to. They were from early 1950’s Chrysler Imperials that used disc brakes and the holes were there for ventilation.

Fred was in the right place, at the right time, and had the right color car. The story goes that the photographer for the album cover was looking for a light colored car for the nighttime shoot and Fred’s “icebox white” T roadster was perfect. Rumor has it that more than a few L.A. Roadsters members were miffed that this East Coast interloper had his car featured on a California surf music band’s album cover.

It’s likely that Fred Steele’s roadster on the Ventures album cover exposed more of the world’s youth to the coolness of T-Buckets than any magazine feature would have garnered in the day. Why? Only a relative few young gearheads were buying car magazines, but 90% of teens were into the music of the day and, therefore, likely exposed to T-Bucket hot rods through The Ventures in Space album cover.

What’s even more interesting is that in an era when surf music and songs about cars were being driven by the success of the Beach Boys and Jan & Dean, that such albums were being released to record stores in rapid fashion and evidently the record companies didn’t mind scrimping where they could on album cover images. Fred’s bucket appears on the cover below from Hal Blaine’s appropriately named, “Deuces, ‘Ts’, Roadsters and Drums” album. And, if you look closely in the upper left corner of the Tokens album below you’ll see Fred’s white “T” again and notice that it’s an image from the Hal Blaine cover’s same photo shoot.

Fred Steele was a larger than life character in the hot rod world. He passed away in 2014. 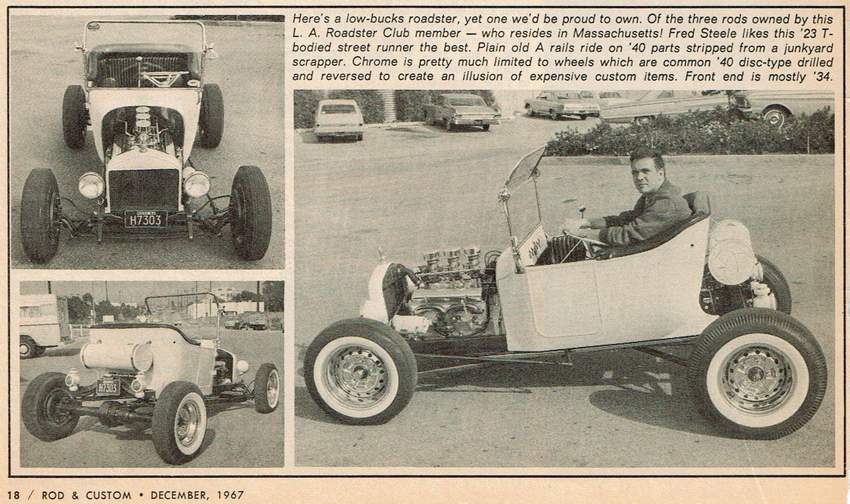 In his day, he amassed quite a car collection and is widely known for his purple 32 Ford roadster that captured the cover of Rodding & Restyling magazine for January, 1958. 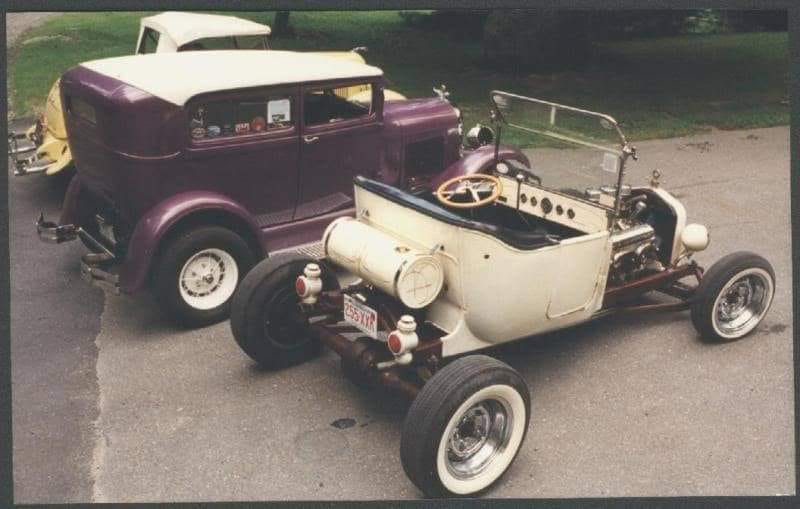 In this photo of Fred and his cars you’ll see his T-Bucket on the left and on the right you’ll see the 1959 Lincoln convertible he towed it to California with when he moved there in 1962. 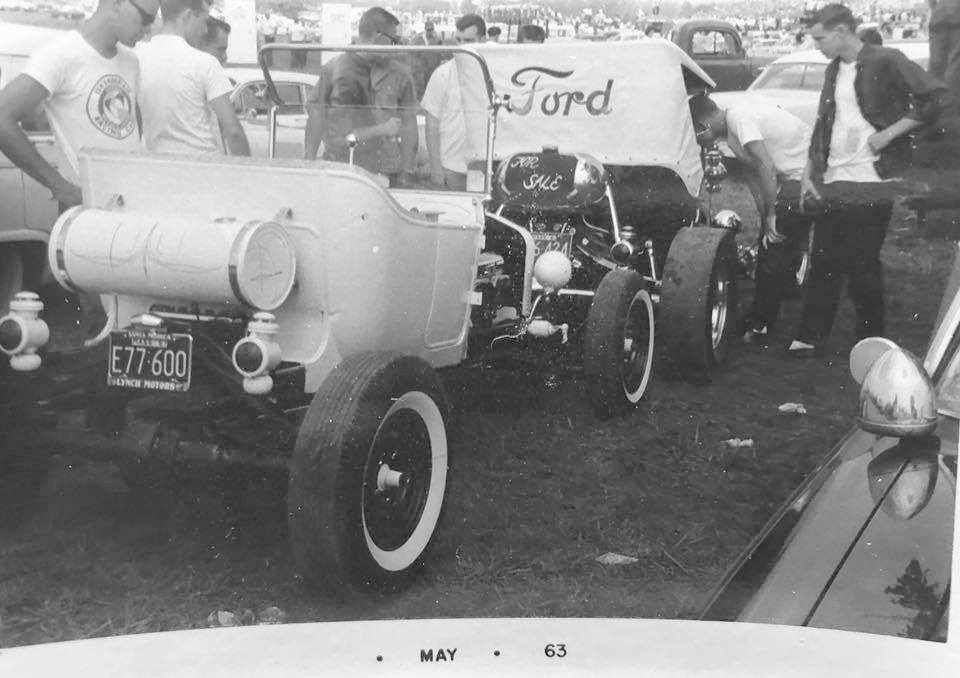 While rare in Massachusetts, Fred Steele’s T-Bucket wasn’t the only one around back then and he was frequently seen in the company of fellow Bay Stater George Gould’s T-Bucket.

The Don Spinney built, Fred Steele roadster is truly a timeless classic hot rod. What’s really cool is that anyone today could use this basic formula to build a T-Bucket on a budget that would have awesome visual impact. A basic T-Bucket body is cheap and a basic donor car for engine, trans and rear end is easy to find for well under $1000. It doesn’t take loads of speed equipment and Fred got the look without resorting to monster tires and tons of chrome. Heck, you can even build a safe, modern Model A frame to achieve the same cool rake with those nice frame horns up front. 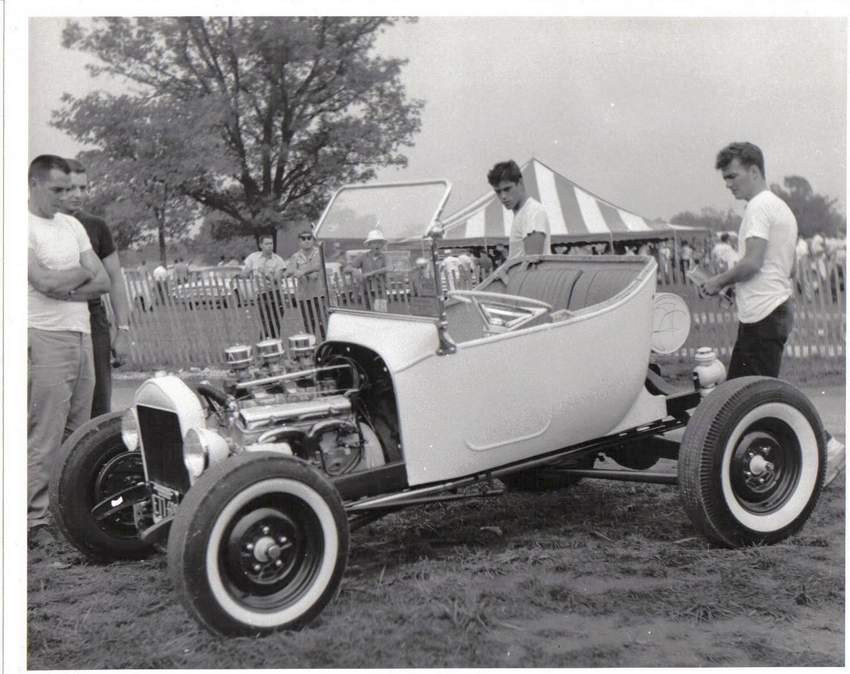 Sometimes simplest is best. It sure worked on the Fred Steele roadster.