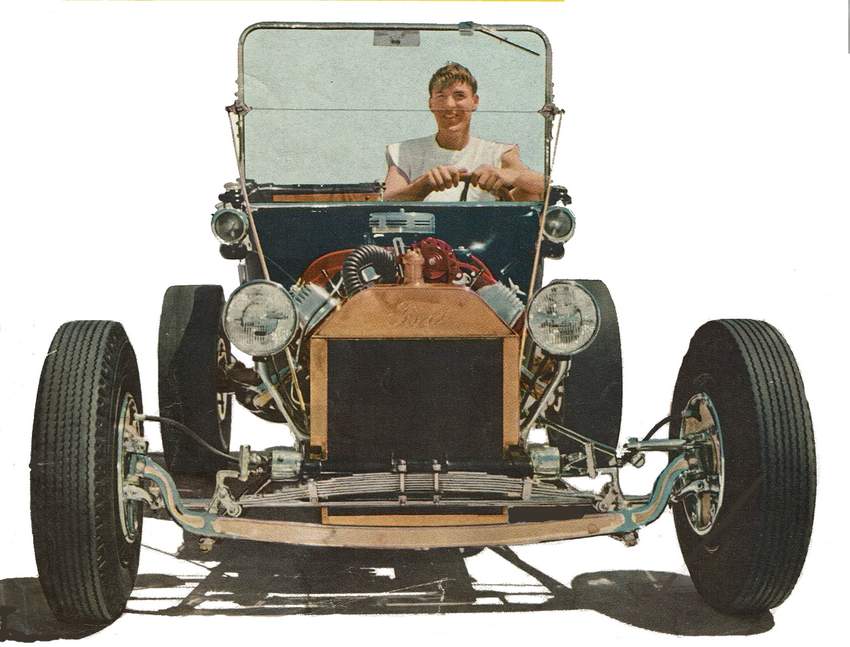 Martin Hollmann is without a doubt the most underrated T-bucket builder of the 50’s and 60’s.

I first wrote about Marty’s T-Bucket over ten years ago and since that time we’ve gained many new followers and added many new posts to our blog, so it’s quite likely this is the first time you’re seeing this.

The Marty Hollmann T-Bucket holds a special place in my view of T-Bucket history not only because of its unique bobtail look at the time and its popularity, but also because Marty was the first traditional T-Bucket builder I interviewed when I started doing these blog posts. I was in awe that a man would take a call from a stranger in the Midwest who wanted to ask him about a hot rod he’d built over 50 years ago as still a teen. It was Marty’s helpful courteous responsiveness that set me on the path to doing the many stories that followed.

How so, you say? Sure, Grabowski and Ivo built awesome buckets that have inspired generations that followed. But, what other 19-year-old (born in Berlin, Germany, no less) creates such a unique, beautifully proportional T-bucket that it achieves the hat trick of hot rodding: the covers of Hot Rod, Car Craft, and Rod & Custom — all within a 15 month period! I first saw Marty’s T-bucket on the cover of the January 1961 Car Craft and was fascinated by it. At the time, I was only 12 and didn’t truly understand the beauty of symmetry, but I knew I loved this T-bucket. The T grille shell was sized and positioned to allow the finned Weiand valve covers to be perfectly visible above its angular sides. And that ’49 Olds V8 appeared massive — it was as wide as the bucket’s firewall!

The profile photos showed a T-bucket that appeared more rakish than those of Grabowski and Ivo. Only later did I learn that there was a significant difference between Marty’s 1915 T body and the later models used by Norm and TV Tommy. I was so taken with the look of Marty’s T that it influences what I’m doing today in building a T-Bucket. When Marty’s T appeared on the cover of the March 1961 Hot Rod, it was paired with Norm’s T touring. Coincidentally, Marty and Norm Grabowski were friends. Norm was member #10 and Marty was member #11 of the L.A. Roadsters club. I’m sure the friendship also helped when Marty’s T appeared, less windshield, in the 15th episode of the 4th season of 77 Sunset Strip as the “Chrome Coffin”.

As further proof of this bucket’s mass appeal, it was used in such movies as “Bikini Beach” and “Son of Flubber” and other TV shows like Dobie Gilles and Westinghouse Playhouse. Built on a short 98 inch wheelbase with a 1948 Ford rear axle snubbed by traditional Model A Houdaille shock absorbers and a dropped ’34 Ford I-beam front axle, Marty’s T looked ready to scoot, even when sitting still. 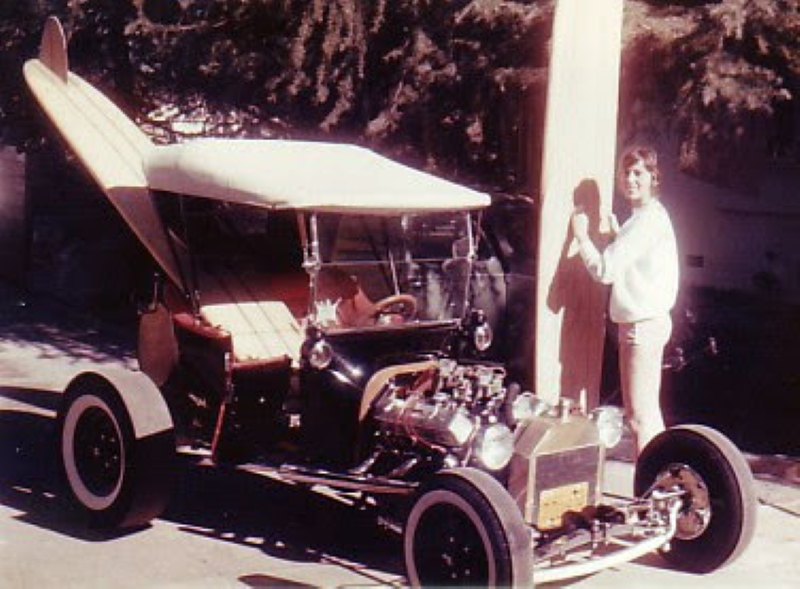 Marty’s bucket was also the car that the Lindberg “Bobtail T” model was based upon. Maybe not officially — but it most certainly was a dead-nuts knockoff. This was a huge 1/8 scale model that even came with a small DC motor to power it. Lindberg still makes the “Bobtail T” (now with a list price of $99). It’s been such a venerable model kit that Lindberg even cloned it in another color and offers it as the “Big Red Rod”.

You can see clay humanoid classic cartoon character, Gumby, tooling around in a Bobtail T in the funny little video below

I learned from Marty that he never received a cent in model car royalties. It seems Ed “Big Daddy” Roth was one of the few hot rodders back then lucky enough to have a licensing agreement with a model car company. 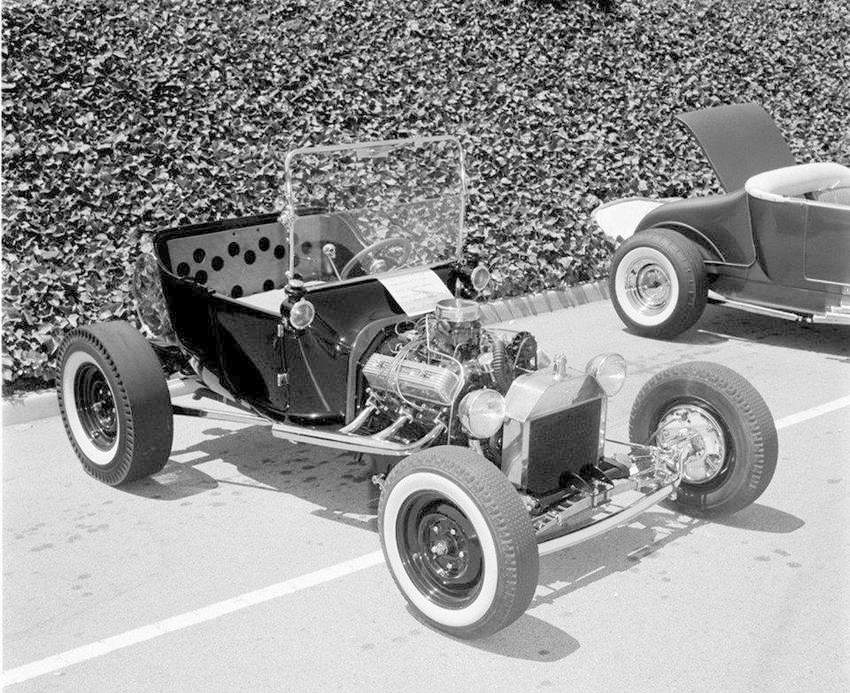 Just in case you might have any lingering doubts about how cool Marty’s T-bucket was, here are a couple of other facts to note: Chassis guru, Kent Fuller, helped Marty in the construction and the shiny black finish was applied by an up and coming young painter named Don Prudhomme. Marty’s T was also one of the first to use a fabricated brass grille shell, done by Gilbert Metal Products, to house a radiator adequate for cooling the ’49 Olds engine that had been bored out to take 1956 Olds 324 pistons. 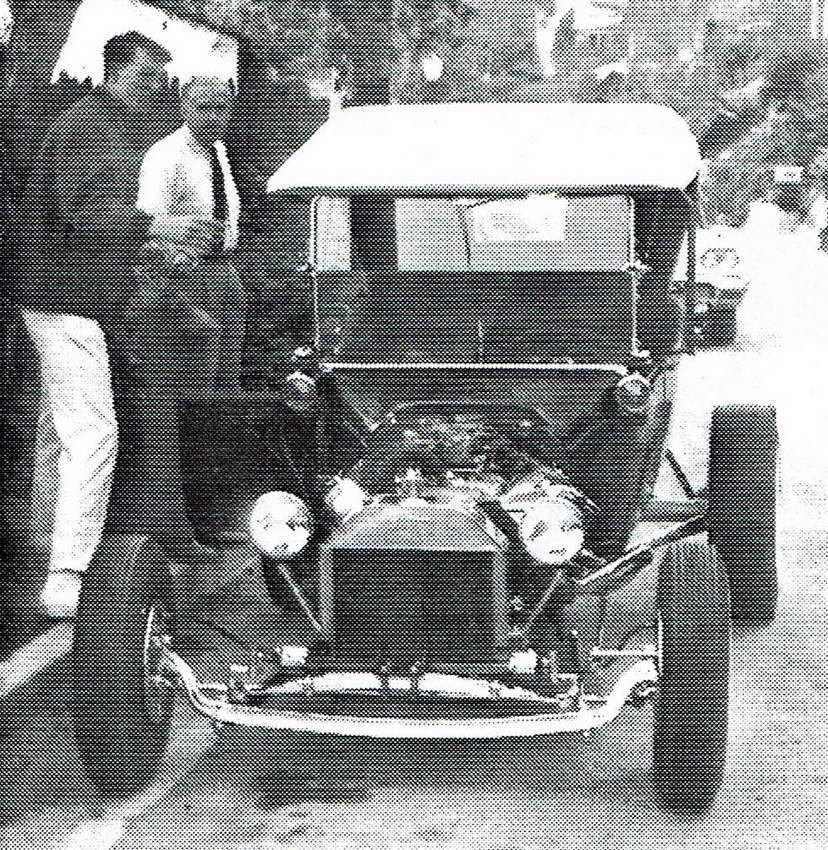 I’m also going out on a limb here that it’s possible Marty’s was the first popular T-Bucket to use converted Model T kerosene lamps on the cowl and for the tail  light.

Before his passing, Martin operated one of the world’s leading independent aircraft design and engineering firms, Aircraft Designs, Inc. I’m such an admirer of Marty and his influential T-Bucket that I put together a short video so that you’ll have an opportunity to also become a fan!

Thanks to the Petersen SEMA Digitization Project, there are a few never-before-seen photos of Marty’s T-Bucket as part of the L.A. Roadsters contingent at a couple of shows in the 1960s.

At the 1961 L.A. Roadsters show at the Hollywood Bowl, Marty’s T was a co-featured “for sale” hot rod with the legendary Dick Flint roadster.

The Marty Hollmann T-Bucket was my earliest bobtail T influence and its clean, uncluttered basic look is timeless.

Marty sold his T roadster in the 1960s and what happened to it after is another one of those hot rod mysteries.

Unfortunately, Marty Hollmann passed in 2012 but he left quite an impression as a result of his full life not only from a hot rod perspective but also largely through his many contributions to aircraft design.