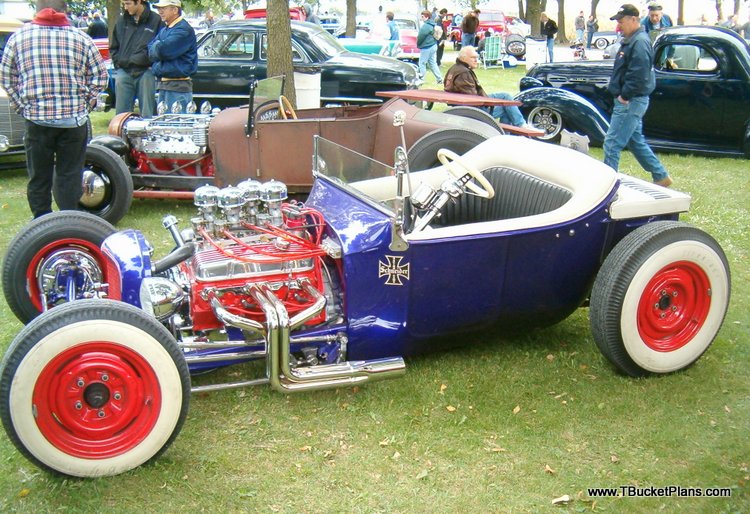 Back in 2010, I did a short post about how every car show should have some real hot rods: T-Buckets, that is. At the time, I included a little Picasa slide show with some real hot rod T-Buckets and just converted it to a YouTube video because some of the Picasa online features are going away. So, now’s a good time to repost that story with the updated video included. Hope you enjoy it.

Every Car Show Has to Have Some Real Hot Rods

When looking at coverage of a car show on a North Carolina news site, this caption under the photo of a nice looking T-Bucket said it all, “Every car show has to have some real hot rods.” That perceptive writer captured the essence of it: T-Buckets truly represent the definition of a “hot rod”.

I cringe everytime a manic John Force hops out of his generic funny car representation of a modern-day Ford Mustang and refers to it as a “hot rod”. To me, that description is just as far afield as if Steve Jobs had unveiled the new iPad and referred to it as his “ham radio”. But, back to “real” hot rods at car shows. All you have to do is observe where the crowds congregate, where the most pictures are taken and where the most questions are asked of the owners of the embodiment of a real “hot rod”, the T-Bucket. These fenderless, engine out in the open, roadsters with virtually all their mechanicals exposed are crowd stoppers everywhere, and have been since their inception. Why else do you think the high dollar Deuce, big buck Boydster, and other life savings sapping street rod owners look down on these innovative attention getters that can be put together on a working man’s budget?