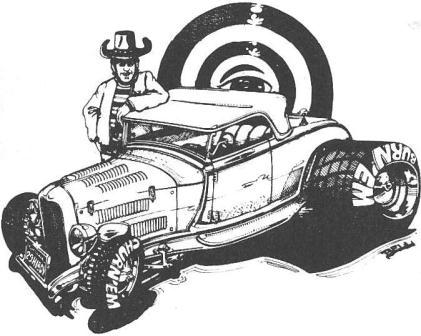 Recently, when HOT ROD Magazine posted on their Facebook page about their T-Bucket project car they received a bunch of unwarranted, uninformed negative comments in response to their solicitation for helpful suggestions. I was ready to write an editorial here on that subject, but realized today that the late Bill Burnham covered this topic 29 years ago with more insight and authority than I might muster. By way of background, Bill was a hot rodder from the ’50s, who was a founding member in 1978 of the Danville Dukes car club, from which came the Goodguys Rod & Custom Association.  As The Rodders Journal noted, Bill “penned a popular column in Street Rodder throughout the ’80s and early-’90s, and was generally the life of the party at rod runs from coast to coast until his untimely passing in 1996.” Enjoy these words of wisdom about T-Buckets from someone who’s actually been there.

From the column: Street Rodding in Bill’s Eye

Many of us have been a party to such comments as:”T-buckets are dead,” “just a starter car” or “BB gun in the world of 357 Magnums.”

No way, Ho-Say! (“Jose” doesn’t come out right in print. In the midwest, it reads, “no way Joe’s” or “no way Josey.”) T-buckets are here to stay! The fellows who poke fun at “Ts” are either people who have never owned or driven one or they are converts to more conventional rods who took a lot of heat while they were bucketeers.

Back in 1955 “Normie Poo” Grabowski started the “T” craze though “modifieds” had been on the street for many years. About ten years later, “TV Tommy” Ivo built a beautiful bucket that became the aesthetic standard. During the late ’60s, Andy Brizio put these cars all over the map with his “Instant T.”

If there is any one piece of machinery that is predominantly responsible for this hobby, it has to be the Juke Box on wheels, the fascinating glitter bug of rodding. The “T” roadster has probably enticed more people into our ranks than any other single type of hot rod. This is particularly true on the West Coast and in the sunbelt regions. Since most of our publications originate in California, the magazines were full of these fancy little critters. — Sure, Burnham, you’re probably right, but all of that is in the past. We’re beyond that now. It’s 1983. –­ Look around you fella, there are still tons and tons of buckets and more being built every day. If this is a fad, it sure has lasted longer than designer jeans, disco and resto-rods!

I guess you really can’t speak with authority on this subject unless you’ve owned one and if that’s an accepted criteria, then I must be an expert, because I’ve had several. When drag racing burned me out in 1968, my first choice for a rod was a bucket. I built it in four months for less than $500.00 — painted, upholstered and running under its own power. When I strapped this 150-horsepower skateboard under my butt it was FUNNNNNNNN!! I drove it everywhere and looked for excuses to drive it even more.

Out on the highway I encountered the eerie feeling of wondering just what in the world I was doing there, cruising along with all of the two- and three-ton masses of Detroit steel. Those monsters could crush my fragile $90.00 fiberglass body and never be the wiser. Looking through the front suspension, the carb linkage, the shaking radiator and the rotating wheels and tires gave me the feeling of complete control. I could hear the engine, watch the fan spin and smell the VHT burning off my homemade headers. About the only things to worry about were flat tires, running out of gas and the kookoo birds that would drive alongside me, creeping over into my lane for a better look at my toy. For the pure thrill and feel of driving, there’s nothing like a bucket. I remember it this way: My “Ts” were somewhat akin to driving dragsters while my coupes, sedans and restos gave me the impression of making a warm up pass in a K/Stock Automatic.

One might suspect that the snide little innuendos directed toward T-buckets are the by-products of subconscious jealousy. — Hey, baby, I’ve got an all-iron, full-fen­dered, N.O.S.-equipped 1932 Ford. Ain’t no way I’m jealous of no fad T-bucket. –­ Ha, more than a few of us have encountered the situation, whether at a shopping center car show or professional autorama, wherein the bucket parked next to the high-dollar, all-steel rod has attracted the most attention … envy time! To the great unwashed public, the bucket is a mind­-blower, while my hi-boy is little more than an unfinished old car that still needs fen­ders and running boards. My resto rod was, to the man on the street, just an old car like the one in which he first learned to drive.

Attentionwise, my T-buckets and tub were like flypaper compared to the coupes, sedans and hi-boys that I’ve owned. No one ever asked me who did the restoration work on my “T” but there was always some dummy who wanted to know who restored my antique (hi-boy or sedan) car. A T-bucket is obviously some kind of hot rod. My Chevy resto sedan was simply just a fixed-up old car. The only adverse comments I can recall about the “Ts” were when little kids used to cry out, “Hey mister, like yer dune buggy!” Now that did hurt.

It would be fair to ask you, if these pud­dle jumpers are so neat, why don’t you still own one? A couple of reasons immediately come to mind. First of all, they’re a very easy car for a family to grow out of. Two adults and a couple of little kids are just about all that can be crammed into a buck­et. Under those circumstances, you may have to sacrifice some comfort on a round trip over a 100 miles.

Of course it goes without saying that a single guy or a couple with only one child can have a ton of fun for a long time. The other reason is also just as simple. Buckets can beat the hell out of you weather­-wise, and I’ll be the first to admit it. While any open car can pretty well use you up, a bucket does it just a little bit faster. The older you get, the faster the cramps come and the longer it takes the old bod to re­cover from the rigors of a 1000-mile round trip.

You might read into this that T-buckets are just “starter cars,” i.e., first rods, but I still won’t believe it. Your first car could just as well have been a Deuce hi-boy that became too small for your family and too torturous for your body, leading you to choose a sedan for your next, or even backup street rod. I’ll bet there are some rodders out there that have started with coupes or sedans, graduating up to a “T” just to find out what open car rodding was all about. (That’s what happened to me.)

They’re still just a fad? Not on your life! Street rodding itself is just a fad com­pared to the long-suffering T-bucket. Rodding has been an on-again-off sport since its inception in the late ’30s, but the “T” was one of the first signs of rodding and one that still remains with us. Even before the old black and white issues of Hot Rod Magazine hit the newsstands there were “T” modifieds running the dry lakes and cruising the streets of Southern California. The late ’40s car shows featured track “Ts” and their counterparts, the street-equipped modifieds.

Even during the rodding depression, circa 1958 to 1968, the “T,” along with the magazines and car shows that featured them, kept the embers of rodding alive. T-buckets, with a few Bantams thrown in, rekindled the fires of rodding via those terrible Altered Roadsters of drag racing — Wild Willy, Nanook, Pure Hell, and Speed Sport, right? Kellison, Bird, Tex, Ai and Archer supplied the body shells and Whammo! The rodding depression was over. The kit car swept the country. Suddenly, there were so many rods around that it dawned on someone to start NSRA. They could have just about named it the National Street Roadster Association judging from the number of buckets cruising.

The next time you are tempted to belittle the bucket, just remember you are picking on the apple pie, motherhood and American flag of rodding. Shape up, boy! We’re talking about a type of hot rod that was here before you got here, and will be here long after you and your N.O.S steel luggage rack have gone and turned to dust. Schucks, they’re so much fun I’m going to build another one.

4 thoughts on “Is the T-Bucket a Fad That Has Faded?”