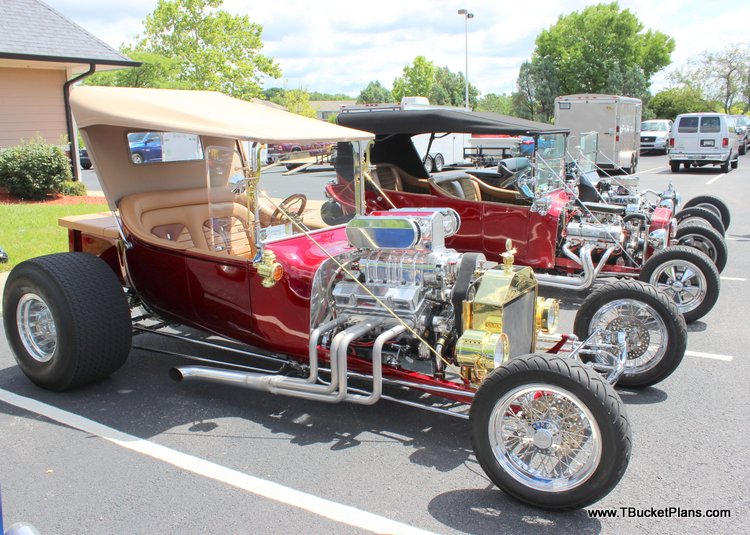 The 2017 T-Bucket Nationals June 22-24 in Carson City, Nevada will undoubtedly have T-Buckets on display that will inspire anyone, regardless of their taste in particular T-Bucket styles. Personally, I’m looking forward to seeing Greg Vaughan‘s beautiful T-Bucket again that I first had the pleasure of seeing at last year’s T-Bucket Nationals in Indianapolis. Here’s my recollection of last year’s experience.

Ever attend an event and before you arrive get butterflies from anxiety that it might not turn out to be what you expected? Last month the fluttering disappeared upon arriving at the host hotel for the 2016 T-Bucket Nationals. Instead, I immediately had a warm, fuzzy feeling.  My eyes were drawn to a dazzling candy apple red CCR T-Bucket parked near the entrance. It was an absolute beauty! And to make it even more authentic as a California Custom Roadsters or CCR T-Bucket the owner, Greg Vaughan, had made the trek to the T-Bucket Nationals in Indy from Norco, California. Greg’s T roadster was a new build that took five years to complete. But, it wasn’t a trailer queen because Greg had put some 1200 miles on it in the weeks leading up to the trip to the Nationals. Although new, this T-Bucket had great nostalgic appeal with its brass grille shell, headlights and front and rear carriage lamps, along with tailgate straps and other brass accents. To me, the 1970s were more than the days of gold chains, polyester, platform shoes and The Partridge Family. The 70s also saw the peak of the “Fad T” phenomenon when T-Buckets were more often accented with converted carriage lamps and as much brass as one could afford. In keeping with the Fad T theme, up front Greg has a beautiful brass T radiator flanked by a pair of brass T headlights. A chromed CCR 4-bend, 4″ dropped front axle leads the way and a pair of great looking Metzler tires wrap around the front wire wheels. The pickup bed is the 20 inch CCR traditional look version which features both a molded-in floor and tailgate for strength along with integral Ford script for a traditional look. To top it off, the fuel tank and battery are beautifully upholstered and the bed features brass trim in keeping with the overall Fad-T style. Instead of a round fuel tank that could only hold 10 gallons in that space, Greg’s use of a well-designed rectangular tank allows 40% more fuel capacity for more comfortable cruising. Of course, you can’t keep from being drawn in by the awesome supercharged Chevy small block in all its gleaming splendor. And Greg’s induction setup is truly unique. At first glance to an old-timer it looks like Weber side draft carbs, but in reality it’s a modern EFI system feeding into a custom chromed plenum. In keeping with the brass theme this T even sports a brass plated radiator overflow. The above view also gives you a view of the sleek and elegant looking CCR disc brakes that do not distract from the light appearance of the front wire wheels. Greg chose the CCR Smooth “T” long body. It is 5 inches longer in the passenger area for improved seating comfort and 3 inches longer in the cowl for more foot room. The door and body reveal lines are removed in the CCR Smooth “T” for an overall cleaner appearance.  In addition, the Smooth “T” body features a functional passenger side door with hidden hinges that allow a full 90 degrees of swing for ease of entry and exit. Another nice feature of the CCR Smooth “T” body is its recessed dash, reminiscent of the Tommy Ivo T-Bucket’s dash which was probably the first instance of that customization in a T body. For effortless highway cruising that shifter is attached to a GM 4L60-E transmission with automatic overdrive. Another nice nostalgic touch that Greg employed was to back up the 14 inch T wood and brass plated steering wheel with polished brass reproductions of the original Model T gas and spark levers and the quadrant at the top of the steering mass. Of course, the upholstery is very stylish and impeccably done.

How to Identify a CCR T-Bucket

In case you’re not familiar with them, let me briefly explain how to identify a California Custom Roadsters or CCR T-Bucket. However, these points are not absolutes because just as we recommend many T-Bucket builders combine design elements from various T-Bucket plans, including the CCR T-Bucket Chassis Plans that we offer here. Up front is a good place to start and you’ll find the tie rod runs behind the axle on a CCR chassis, as opposed to in front of the axle as you’ll typically find on a Total Performance T-Bucket, as well as some others. But the big CCR identifier up front is that the cross spring rests on top of the spring perch, while the vast majority of other T-Bucket builders mount the spring under the spring perch.  The CCR theory is that it is less disruptive to the flow of the front crossmember and allows better visibility of a nice chromed front spring. In addition, CCR uses a very cleanly designed fabricated steering arm that is welded to the spindles. Covered in their plans, the arm is bent in a nice curve that matches the front axle to allow the drag link to reach it in a straight line under the tie rod. Another CCR design feature, as covered in the plans, is the elongated “bat wings” which connect to the radius rods. Most other commercially available T-Buckets as well as those built from other plans utilize front and rear radius rods that are typically from 30-36 inches in length. So, looking at a CCR T-Bucket from the side the 50+ inch long front radius rods meet the 40+inch rear radius rods at a nicely designed single bracket that mounts just at or behind the firewall, depending on whether it’s a long or short body. The tall T top is a CCR innovation that’s stood the test of time and is a popular contributor to a distinctive T-Bucket profile. The CCR top frame is of one-piece tubular steel construction and mounts to the body at the back and to stylishly curved brackets at the front which attach to the windshield frame. Another possible identifying factor is the size of the frame rails. CCR uses 2″ x 3″ x 3/16″ (0.1875″) rectangular steel tubing. Some other T-Buckets use 1 1/2″ x 3″ x 1/8″ (0.125″) tubing. While the larger size difference is not a critical factor it is easier to tap for fasteners and if you look real close has a smoother profile than the smaller tubing. I guess that if you were going for a Hemi or other big block power that the larger tubing might offer some greater degree of comfort with respect to torque twist resistance.

I thought that as long as I was sharing this great looking T-Bucket of Greg Vaughan that I might as well provide some tips on T-Bucket identification for those not already familiar with the various styles. Hope you’ve enjoyed it as much as I did seeing it in person.

When you attend the 2017 T-Bucket Nationals, I think you’ll agree that Greg Vaughan’s CCR-based T-Bucket will be one that inspires you and you will truly remember. See you in Carson City!

Scroll back to top