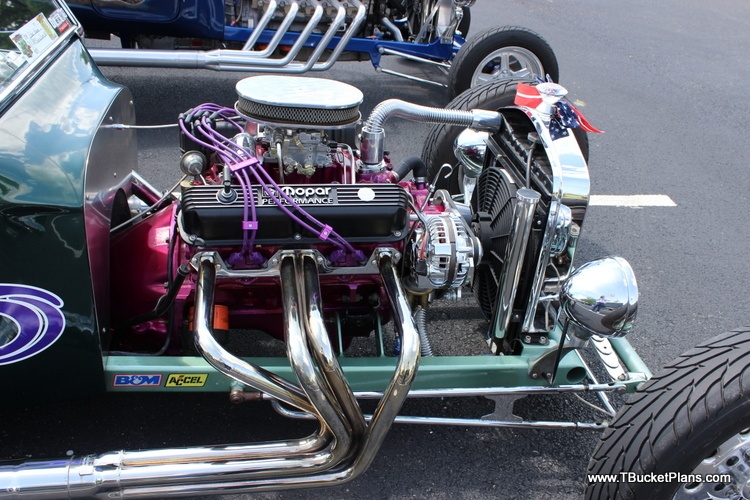 Shari Ward’s T-Bucket roadster is notable not only for its Mopar power but a number of other unique details as well. But it’s just not everyday you see a nice looking T-Bucket with a distinctive Chrysler 360 cubic inch engine. To me, it’s the little details that can make a T-Bucket stand out in a crowd and Shari’s does. For instance, it’s rare to see a tubular front crossmember  that’s not capped on the ends, but it’s a cool look that’s further enhanced by the radiator support tabs that have been blended into the frame so nicely. And while we’re at it, check out the further individuality in the spring perch design. I like it. Continuing the “road less traveled” theme, Shari chose to go with a turtle deck rather than the more typical abbreviated pickup bed. And the cylindrical fuel tank being mounted at the rear of the turtle deck almost gives the appearance of a rolled rear pan. The huge tires just add to the fun. By the way, the ’26 T reference on the license plate of Shari’s ’23 style T is more likely reference to how the T is titled.

The T’s individuality is further enhanced graphically with the scallops/flames mashup. The green/purple color theme is carried into the interior and is yet one more statement of feminine individuality in this Mopar T-Bucket. But what’s really great is that Shari’s not afraid to put the miles on her T which makes many of the shows and cruises in Arizona. When you attend the 2017 T-Bucket Nationals in Carson City Shari Ward’s uniquely different Mopar T-Bucket is one more of the many that will stir your imagination and fill your ideas library. See you there!