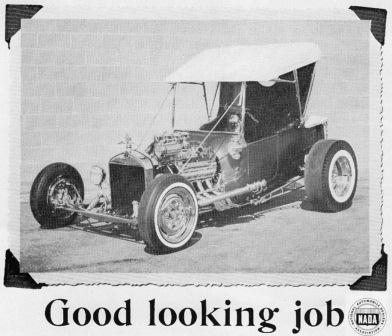 Several years ago, I published this post about the origins of the term “Fad T” being applied to T-Bucket hot rods. I’m republishing this updated version because I recently stumbled across Tex Smith’s telling of where he first heard the term and the circumstances surrounding it are still quite interesting today. Enjoy.

To start, here’s the definition of Fad T from no less an authority than the “Ultimate Hot Rod Dictionary: A-Bombs to Zoomies” by Jeff Breitenstein:

fad T (also fad car) n. Any T-bucket roadster constructed entirely from new, prefabricated components, including a reproduction fiberglass body. The first aftermarket fiberglass roadster bodies featured in hot rodding and street rodding applications were introduced (notably by Cal Automotive) in the late 1950s. From the early to mid-1960s, T-bucket roadster kits gained in sophistication and completeness; the resulting fad-T trend peaked in popularity in the late 1960s and has maintained moderate favor to the present. Fad-Ts offer the advantages of simpler construction and lower initial cost when compared with other street rod types, but are sometimes discounted by rodders who prefer genuine vintage tin bodies and components. I’ll put a stake in the ground and say that the term fad T was first used in print by the legendary hot rod writer and builder LeRoi “Tex” Smith in the July 1964 edition of Rod & Custom magazine (which coincidentally featured Bill Schmidt‘s awesome ’24 T-Bucket on the cover). Fresh from building the innovative XR6, which was crowned America’s Most Beautiful Roadster at the 1963 Oakland Roadster Show, perhaps no other person at the time was better qualified to write a story on “Trends in Roadster Styling”. In comparing “traditional” roadsters and modern roadsters, Tex noted that:

“(The modern) category also takes into account the ‘fad’ cars, as they have come to be known. These are the ‘kookie’ cars that have become the rage in various sections of the country. In the early days of hot rodding they were called modifieds. They consist of an engine, frame, four wheels and a body. And not much else. They are generally of the bobtailed version, using a ’23 glass Model T body set at a rakish angle on channel iron frame rails. The engine is very much out of doors, with outside drag headers modified (usually plugged) to feed the exhaust through stock mufflers under the body. Stock height windshields and tops add to the strange illusion of great height of these styles.

Although the kookie cars are never identical in every respect, they do look the same. Thus the tab of ‘fad’ cars by the more traditional builders.

These cars are really quite easy to build, especially since they have become so popular. There are several major speed companies now offering complete kits for building such a car, which makes them even more reasonable. They also make ideal show machines, as they catch the fancy of the general public. However, unlike the other categories, they are not the greatest for highway cruising. Much fun around town, though. Many West Coast builders are now even chauffering two cars, a kookie machine and one of the other approaches.”

Shortly thereafter, Tex reinforced the fad term in his “Hot Rods Down Under” story in the October, 1965 Car Craft by commenting on a photo of a particularly cool looking Aussie T-Bucket that “the fad roadster is a natural for Australia (and) creates a big gathering at the few custom shows now produced.” Then, in the February, 1966 issue of Popular Hot Rodding (which featured the beautiful Medley and Musick T altered on the cover) in his story about the Marasco brothers’ hot rods Tex kept the term alive by writing, “Fred had wanted to build a small fenderless ‘T’ bucket ‘fad’ car for a long time, and Dave’s masterpiece just whetted the desire.” The T-Bucket had so rapidly become a popular hot rod by the mid-60s that the following year the National Automobile Dealers Association (NADA) used a T-Bucket in its ads (see photo above) recruiting young men (and women) to pursue careers in the retail automobile business. Only recently, however, when I was looking at the March, 1976 issue of the defunct Rod Action magazine did I notice that Tex Smith actually described when and where he first heard the term Fad T used to describe a T-Bucket or T roadster hot rod.

“The very first time I head the term Fad Car used was at a regular meeting of the Roadster Club. There was a rather heated discussion as to what constituted a read roadster. The newly formed Bay Area Roadster Club had restricted their membership to 1932 and older body styles, and the Los Angeles Club had included lengthy discussions pro and con for the body styles through 1936. On this particular occasion, a simmering debate had surfaced concerning the ‘purity’ of fiberglass replicas. There were a number of members who felt only metal roadsters should be considered a real hot rod; others held that the styling concept was the only controlling factor. At stake was membership in the club, because there was a flush of new fiberglass rods showing at club functions. During this debate one member stood to voice his opinion, and in the course of his oration he happened to mention how all these fiberglass cars seemed to look alike. To him, it seemed we were just in the throes of a fad, and such fad cars would eventually disappear. The name stuck as the only really definitive term for these cars (meaning the fiberglass variety), and although it was a bit derisive at first, it has come to be an accepted part of the hot rod language.” Tex really knew what he was talking about. In later describing how the XR6 was conceived, he said, “I had been using a lot of drawings from artist Steve Swaja, a student at the time at the nearby Art Center. One day I asked if he could design a roadster project for me, using a combination ’23/’27 Model T body and a race car nose. This was the drawing that we used as the project was introduced in Hot Rod. Curt Hamilton and Bud Lang had recently begun producing the first fiberglass replicas of the Model T bodies, mostly for drag cars. Their company was called Cal Automotive. Curt made me up a ’27 cowl mated to an upswept ’23 rear portion.” However, this design concept swiftly changed when Tex received a phone call that a major model car company was willing to pay for the whole project if it was really far out. The rest is T-Bucket hot rod history.

“The Sixties brought with them a new technology and the large scale development and production of fiberglass replica bodies and components. To the guy that ‘discovered’roadsters in the Sixties, the word brings to mind a glass ’23 T roadster pickup on a square tube frame, with lots of brass trim and a Chevy V8. The name ‘Fad Car’ is now a little inappropriate ’cause man, let’s face it, there’s more of them than any other kind!”

“T roadsters are now known as Fad cars. The name couldn’t be more appropriate, for the Fad T has been largely instrumental in the current popularity of the street sport — if it hasn’t in fact overtaken the ’32 Ford’s image as the ‘typical’ street rod. Which brings us to the question of just how typical Fad T’s are. Many rodders (non T owners) tend towards the attitude ‘If you’ve seen one Fad T, you’ve seen them all.’ However, since the ‘typical’ T roadster must be built from so many nonrelated parts gathered together at the owner’s personal discretion, the truth is that each Fad car inevitably turns out different from all the rest … Like snowflakes, they may be basically similar, but you will notice that no two are identical.”

Sixty plus years later, T-Buckets remain popular as economic, simple, fun hot rods. A fad is supposed to disappear after a short while, so you really can’t call the T-Bucket a Fad T any longer. It’s probably more of a Trend T and it could even be argued a Traditional T — but that’s a story for another day.

5 thoughts on “Fad T: Where Did That T-Bucket Term Come From?”