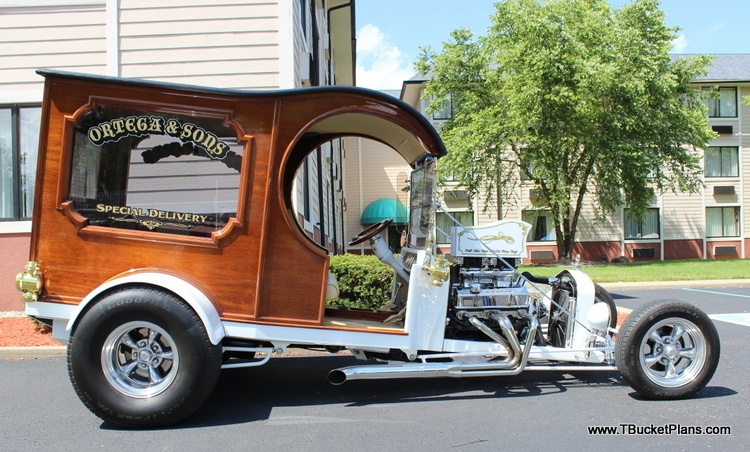 If you’re a C-Cab street rod fan, you’ll not want to miss the 2017 T-Bucket Nationals, June 22-24 in Carson City, Nevada. It will be your opportunity to view up close and personal the lovely 1916 Ford C-Cab street rod scratch built by Steve Ortega of Rohnert Park, California. I think it was back around 2006 when I first saw the above photo of Steve’s C-Cab street rod on the Internet and I was hooked on its beauty. The stunning mahogany finish was perfectly complemented by the clean white paint finish and the C-Cab’s profile was just perfect in my eyes. So I was a happy man when I arrived at the NTBA’s 2016 T-Bucket Nationals in Indianapolis and it was one of the first T’s I saw. According to Steve, he built this C-Cab street rod from scratch, but with some inspiration.

Steve said it was built to look similar to the Monogram Paddy Wagon model from the 70’s, which was designed by Tom Daniel.  The Paddy Wagon was quite a popular model car back then and its sales were not far behind the incredibly popular Red Baron T-Bucket, also designed by Daniel. Steve started his project in 1997 and it’s built on a chassis that’s modified a bit from the California Custom Roadster’s T-Bucket Chassis Plans. Steve modified the frame behind the cowl by making it wider and a better support for the wide, flat floot. The white paint that perfectly complements the woodwork is PPG urethane. Those sharp wheels, by the way, are American Racing polished 5-spokes with B.F. Goodrich tires. But hold on, because here comes the lesson in scratch building a great looking C-Cab street rod. To start, it’s got to have curves or it’ll just look like an awkward box. Knowing that, Steve bought a California Custom Roadsters T-Bucket body and proceeded to chop off everything behind the cowl. That gave him the nicely curved cowl look that’s so important in making this C-Cab street rod look so good. The floor pan was constructed from plywood. The script on the custom carb scoop over the dual Holley carbs on the tunnel ram reads, “Built Ford Tough with Old Chevy Stuff”. The engine is a Chevy 350. The second important thing Steve did was build that curved C-Cab roof like the one on the Paddy Wagon model that inspired him.  The roof is made from wood slats laid out over curved wood bows and covered with period vinyl. One more set of curves for appearance sake. Now it may not surprise you to learn that Steve’s profession is woodworking. The main body of Steve’s C-Cab street rod is constructed from laminated plywood and covered with Honduras Mahogany veneer and solid wood trim. The rear axle, by the way, is out of a 1956 Chevy passenger car. The wood finish is a beautiful mix of walnut and cherry colored stain with 10+ coats of automotive clear urethane. A CD stereo is mounted under the driver’s seat and that’s a clever power window between the front and rear compartments. In the photo above you’ll note the tilt steering column connecting through the firewall to the polished Corvair steering box. The shifter controls the Turbo 350 transmission and the dash houses a full array of Autometer gauges. Of course, the rear compartment is equally well-appointed and the side glass is highlighted by Steve’s perfect wood joinery. And have no doubt that this C-Cab is also a driver. Steve and his wife have driven it all over Northern California since its completion in 2002, having participated in many shows, parades and cruises. It’s been many smooth miles thanks to a Shockwave 9000 Air Ride rear suspension setup. When you attend the 2017 T-Bucket Nationals in Carson City this beauty of a C-Cab street rod will be a treat you’ll want to spend time taking in further. “I like the people looking at it and trying to figure out different things,” Steve said.