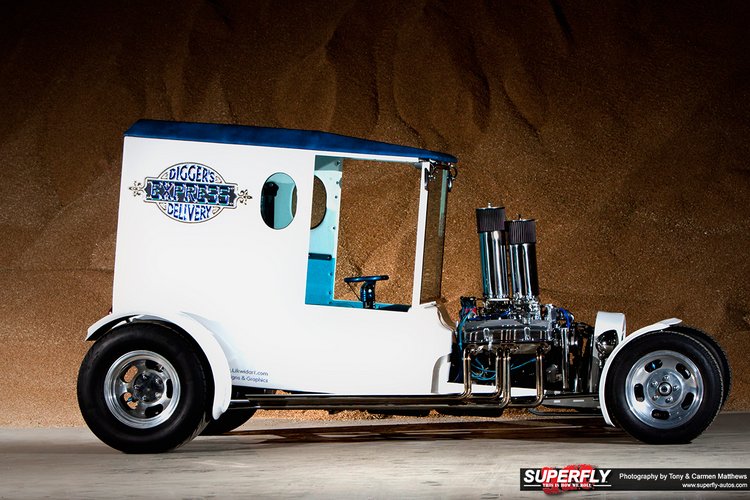 OK, my first true hot rod love is T-Buckets. But, truth be told, I’m also a sucker for a sweet C Cab. Maybe it goes back to seeing cars like Dan Woods’ Milk Truck or Steve Scott’s Uncertain T with its crazy cool raked roof line. And, after all, a C Cab is really just a stretched T-Bucket with a top and lot of room for the miscellaneous trappings of travel inside.

So, when I saw the beautiful photography of Trevor Gardiner‘s awesome U.K.-constructed C Cab in an equally beautiful online magazine with the intriguing name of SUPERFLY I knew I wanted to share it with the followers of TBucketPlans.com. Thanks to Tony and Carmen Matthews, we’re happy to be able to do so.

Custom built from the floor up and with 300 ponies under his right foot, has Trevor Gardiner built the fastest delivery van on the planet!?

The term “custom car” is one that’s thrown about quite a lot, by myself included. Yet I feel almost a little ashamed at how often I use it after speaking to Trevor about the journey he’s taken to get his rod to where it is. His story wasn’t all parties and fun though. Having already built the rod in his head Trevor was waiting until the right time in his life to put his ideas into reality. Holding off until his retirement years would mean he could dedicate as much time as he wanted to this one off build. Unfortunately one of his close friends passed away which was understandably a shock for Trevor. It also made him re-think his outlook on life. “Life is too short. If you want something go out and do it. Don’t delay it as you never know what’s round the corner” Trevor tells us. Needless to say this kick started project “Diggers Express Delivery”. From an early age Trevor had been building modified and custom vans and pickups so it was clear from the get go that this build would be no different. It’s all well and good smoothing out your bumpers, dropping your car on bags and getting some fancy rims! But it’s the hot rod boys who really have the rights to lay claim to being the kings of custom. This is Trevor’s first rod and what a rod to cut your teeth on! Looking more at home in a toy box than on the road this thing is seriously epic and in true hot rod fashion this monster was fully hand built by Trevor and his mates. That massive box compartment has been crafted in steel over a box frame. A rear bench from an old Vauxhall Frontera has been modified to fit into the cabin along with an upright steering column from a Transit. It can’t be the most comfortable motor to drive but when it looks this good who cares! “It feels really planted but because of how narrow the front is it can be a little hairy in the wet” Trevor explains. The back of the cab is reserved for his “deliveries”. The whole interior has been trimmed and finished off in aqua blue that pops really hard against the clean white exterior. From the steering wheel to the rear door panels nothing has been left untouched. It’s clear that aerodynamics wasn’t at the top of Trevor’s priorities when carrying out this project but that doesn’t stop this motor from laying down elevens at full chat! To drag along that massive cab a custom powerhouse has been built that’s based around a Chevrolet engine. Too Trevor’s own admission the engine is a bit of a Pandora’s box. The job of building it was given to his mate Tom. Tom was left to his own devices and the end result is a healthy 300 bhp at the wheels. Twin carb stacks dominate the front end of the exposed engine. No hot rod would be complete without the orchestral sound of a million ponies and the full custom exhaust that runs the length of the chassis sounds just as good as it looks! No matter what circle you’re from everyone can agree that it takes the right rims to complete a build. A set of staggered Slot Mags have found themselves a suitable home under the arches of the Ford and do a top job of filling them out! The whole build has been finished in pearl white with a “Diggers Express Delivery” logo emblazoned down the side. Trevor’s story started under sad circumstances but I guarantee that his mate is smiling down on him today proud of what he’s achieved! If you’d like to see more of this style of great automotive photography and stories about cool cars and the fascinating people who build and own them you will be glad you visited the SUPERFLY website where you can view past issues of the online magazine. Tony and Carmen Matthews have utilized their photographic and journalistic skills to put together a beautifully unique vehicle for uniting all the automotive cultures from around the world.