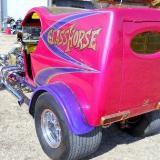 I’m a big fan of the C-Cab variation of T-Bucket hot rods. It probably stems from the fact that back in the mid-60s one of my favorite cars at the local drag strip was an English Ford Thames panel truck that happened to be powered by a Hilborn-injected Y-block Ford engine. I just dug the look of the angular (no pun intended) body and rear door. And that interest carried over to C-Cabs, which were just becoming popular with hot rodders at that time thanks to Dan Woods’ Milk Truck. So, when I recently noticed somebody had a “Pro Street” C-Cab for sale, like the gawking motorist who sees flashing blue lights up ahead, I just had to see more. As previously noted, I don’t normally blog about T-Buckets that are for sale unless I find them particularly interesting either from a historical point of view or because of the creativity and/or workmanship they embody. This particular C-Cab qualifies for further mention, and hopefully fun viewing, in light of some of its creative elements. I’ve seen a lot of C-Cabs over the years, but none with the huge rear tires, tubbed and narrowed rear end “Pro Street” look like on this one which, if I had to guess, was probably built in the ’90s. Now, the trucker’s angel in the grille shell isn’t my kind of thing and what looked like overkill headlight and/or shock stands had me puzzled until I noticed the picture below and realized they were undoubtedly front fender supports. You’ll note that it no longer sports the frame covers/running boards nor the “hemi”-like valve cover covers. But, on to the creative aspects of this C-Cab, like the curved, tinted plexiglass skylight window and the roof-mounted wing with “feet” side supports (shades of the old Eelco products). You have to admit, the fat tires and narrowed Dana 60 axle look pretty tough from the rear and the tinted oval rear window is another nice touch. The “GlassHorse” was built by someone with a definite vision, although it’s now about 15 years behind current tastes. For a moment, just imagine this freshened up with a nice glistening black finish and some tasteful pinstripes. It would be a huge attention getter, probably even more so than with its current paint scheme. The interior is laid out in typical 60s and 70s C-Cab fashion, including the “foot” accelerator pedal and vertical steering column. Try to ignore the rough look of the holes in the frame rails below the body because most of these pics are without the combination frame covers/running boards, which I think look great when the front fenders are also attached. Of course, the tiger skin upholstery on the seats would have to go and while I love diamond tuck upholstery the fact that it’s in fabric seems to date it even more. But, just look at how cool it is when that tinted skylight lights up the interior, which would be pretty dark otherwise even during the day. While the current owner says he thinks it looks best without the fenders and running boards, my personal vote is for putting them back on. Now, here’s where even more creativity points are racked up. By 1966, flip-up bodied funny cars were becoming the hot look and numerous hot rod and show car builders tried to emulate that look and that’s what’s been done here. So, it’s really a flip-top, pro street C-Cab. How’s that for mixing hot rod genres? However, there’s just a little problem with getting the body to settle back down on the frame rails after raising it, but that’s small stuff today. While this T creation may not capture everybody’s fancy in its current incarnation, I’ll argue that with some tasteful updates to paint, upholstery, etc. this can turn into a real gem of a ride for some lucky T-Bucket fan. You can see the sale listing here>