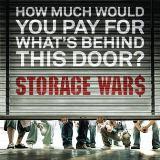 Over 3 million viewers anxiously await each week’s episode of the top-rated cable television series, Storage Wars, just to see what hidden treasures lie behind the roll-up doors of rent-past-due storage lockers that can be had for a song by the lucky or knowledgeable winning auction bidder. And I’m sure most of you T-Bucket fans are hoping it’ll be some long-lost hot rodding treasure. Well, this is the vision I hope to see when that door rolls up. Hmmm, that looks like a fiberglass body mould — why, it looks like a C-Cab, if I’m not mistaken. Wait a minute! Could it be …? Yes, it is — a Dan Woods C-Cab body mould. In case you’re not familiar with Dan Woods, I’ll try to explain. First off, he’s not the actor-turned-producer/host of cable TV’s Chop, Cut, Rebuild.

The Dan Woods I’m talking about is the high school hot rod virtuoso who built the legendary Milk Truck C-Cab show car back in 1964.

That accomplishment landed the youngster a job working for Ed “Big Daddy” Roth and being instrumental in the construction of the 1966 Druid Princess show car.

While working with the crew at Ed Roth’s, Dan met and worked with talented cartoonist and designer, Ed Newton. Together, Dan would share his ideas of what the next generation of the Milk Truck might look like and Newt would reduce those ideas to beautiful designs on paper. Construction began on what would be known as Dan Woods’ “Ice Truck” in 1967 and was interrupted when Dan was drafted in the Vietnam War era, served his country and returned in 1969. The first published representations of the “Ice Truck” were in Rod & Custom magazine in the summer of 1970.

The Ice Truck debuted at the 1971 Oakland Roadster Show and around that time Dan Woods was establishing his own business, Contemporary Carriage Works, which would build complete high-end T-Buckets and also sell Dan’s unique T-Bucket chassis and suspension configuration as well as T-Bucket bodies of a 1915 style and a very unique C-Cab. One of those Dan Woods’ produced C-Cabs was the “Beer Truck” built for C.D. Hall, which appeared in Rod Action magazine in January, 1974. Of course, this C-Cab body is distinctively different from the bodies on the Milk Truck and the Ice Truck, both of which were one-off fabrications, rather than being pulled from a mould. However, the body on the Beer Truck was much more sleek and stylish than the Milk Truck and a bit more practical in terms of size than the Ice Truck. Now, it starts to get interesting. Back in December, 2007, in a H.A.M.B. discussion of the Ice Truck, a forum regular with the handle, DrJ said, “Wife and I were on a bike ride down by the Queen Mary this afternoon and saw a pair of Fad T’s made with the high-back sectioned body that Woods did back around the same time. I stopped to talk and one of the guys who called himself ‘Roadster John‘ told me he used to have the Woods C-cab mold but sold it to a guy in Washington and knows that the mold still exists in useable condition. He didn’t seem to want to tell me WHO it was had the mold though…” Then, last week on April 1 (I’m hoping that day is just coincidental), I see a post on the same forum from a guy with the handle, Bernies Welding, in Spokane, Washington, of all places, with these C-Cab mould pictures saying that thanks to his wife bugging him to clean up his junk room that he picks up a Spring ’09 copy of The Rodders Journal and it finally dawns on him that the fiberglass mould he has in his own storage locker originated with Dan Woods. Bernie went on to explain how he came about the mold: “… it was purchased by a friend in Paramount, Calif. His name is Roadster John, and he still builds hot rods today. John bought the mold at a auction at a self storage facility. He produced a few bodies (amount unknown) and a couple of complete hot rods. When I was welding chassis for him that mold was sitting in the corner of the shop, it always intrigued me and a few years later I was in SoCal and went to visit my friend and we got in a conversation about the mold and worked a deal and I bought it from him and I have had ownership of it for about 10 yrs now and now I am in a position to do something with it ...” Of course, there is always some skepticism when somebody shows up from out of left field with a new discovery, but the fact that Bernie had a half dozen pictures of the mold and that the mold certainly seems awfully close to the beautiful Dan Woods C-Cabs makes me want to be a believer. If you haven’t seen too many T-Bucket moulds, keep in mind that the external flanges which are there to reinforce the mould and make it separable can somewhat distort your perception of body lines. I think you’ll have to agree in looking at the Vern Matsushita C-Cab with the Woods body above that it’s a really dramatically beautiful package. Coincidentally, I ran across one of these C-Cabs at the National T-Bucket Alliance 2008 T-Bucket Nationals in Springfield, Illinois. It had seen some changes over the years, like the addition of rear fenders, that took away from the elegance of the original Woods look and most casual observers completely overlooked it. But, once you matched that C-Cab body up with the totally unique Dan Woods’ opposed coil front suspension there was no mistaking its origins. (Update 2019: I learned from the man himself, Roadster John Burks, that he built this orange C-Cab with fenders at his Fantasy Engineering shop. John also acquired and later sold the Woods’ C-Cab mold that is the center of this controversy. As for the opposed coil front suspension on the orange C-Cab, that’s John Burks’ own variation on the Ed Newton/J&J Chassis/Dan Woods design and John built numerous T-Buckets back in the day in what is known today as the Dan Woods style). So, Bernie is doing his homework and verifying the authenticity of his C-Cab mould. He’s also interested in hearing from you if you might be a future prospective purchaser of one of these C-Cab fiberglass bodies when they are put back into “production”. The simplest and best thing to do would be to go to the Contact Bernie page on his website and let him know if you might be interested. I’m certainly hoping this doesn’t turn out to be an elaborate April Fools joke, and so far it doesn’t look that way. I’m a big fan of the C-Cab variation on the T-Bucket theme and I am an especially big fan of Dan Woods’ body of hot rod work. And, wouldn’t it be cool that this terrific body mould was purchased for a bargain price at a storage locker auction?

January 22, 2012 Update: After publishing this post, I learned from legendary airbrush artist Tom Davison via the H.A.M.B. that the mysterious moulds in this story were designed by another famous airbrush artist and hot rod culture hero, Ed Newton. According to Ed, he designed those moulds for what would become Dan Woods’ “HiRoller” and isn’t sure how many more bodies were produced using them. It’s interesting to note in the picture immediately above of the beautiful build for Vern Matsushita (which Ed considers the best build of that body) that the steering is no longer in a vertical position as in the pictures before it. As coincidence would have it, the car had been taken to the shop of another legendary T-Bucket builder, Don Kendall, who repositioned the throttle and steering. That’s Don in the pic trying out the more comfortable steering position.