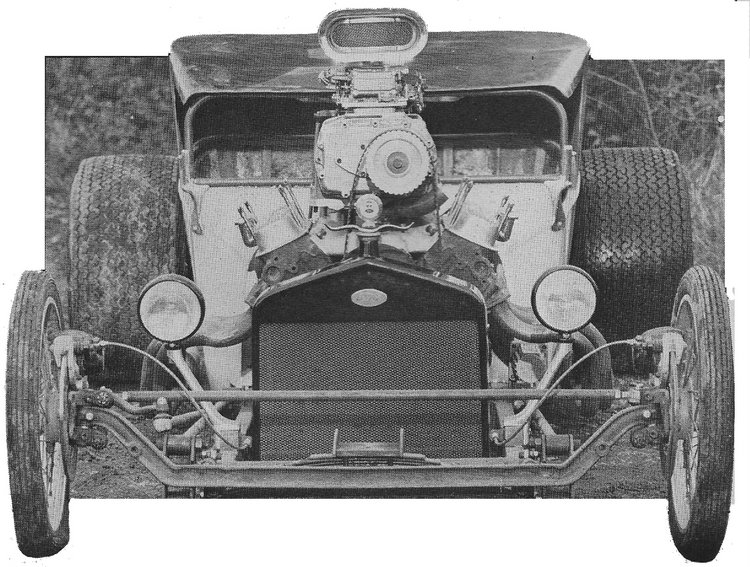 Back in 2010, I did a story about the Pip Biddlecombe Low Blow T Bucket that generated a lot of interest. It’s easy to see why this British-built, Pontiac-powered T-Bucket attracted such attention with its sinister looking low profile. Construction of the Pip Biddlecombe Low Blow T Bucket had begun around 1980. What I didn’t realize when I wrote my original Low Blow story was that Pip’s Low Blow build was inspired by the original Low Blow T-Bucket that was built by Californian Scott Ellis in the mid-1970s. While Pip’s Low Blow was cool, it had nothing on the wildly flamed Scott Ellis Low Blow T-Bucket, which was powered by a blown and injected 426 Hemi. I had the good fortune to be able to see Scott’s Low Blow in person and you just don’t realize how truly low it is until you sit in it and look through the tiny windshield and around that big Jimmy huffer!

It was just what Scott intended it to be: longer, lower and louder than any T that had been built before.

With that as an introduction, I recently came across some under-construction photos of the Pip Biddlecombe Low Blow T Bucket, as well as one of a later version, that gave me the impetus to do this update for all you fans of low-slung T-Buckets.

Pip Biddlecombe Low Blow T Bucket, Before and After

So, in 1980 British hot rod builder Pip Biddlecombe decided to build his own low profile, high power T-Bucket based on Scott Ellis’ Hemi Low Blow that appeared on the cover of Hot Rod in 1977. To get his T low in front, Pip chose an I-beam front axle from a British Morris commercial van, which had been dropped 8 inches. It was attached to his 1 1/2 x 3 inch rectangular tubing frame using his own constructed four-bar arrangement. The T-Bucket body came from Tony Puttick at Westbourne Fender Works and was mated to an abbreviated fiberglass pickup bed from U.K. T-Bucket pioneer manufacturer, Geoffrey Jago. It was mocked up with the 389 cubic inch Pontiac engine and a 6-71 GMC supercharger that would be topped with twin 600 cfm Holley carbs. In turn, power went through a 1964 Oldsmobile Hydramatic transmission. When originally mocked up, Pip used a Jaguar MK2 conventional rear axle, but suspended by Jaguar coil-over shocks. However, that would later be replaced by a 1976 Jaguar independent rear suspension. Twelve months later, Pip’s T was really taking shape and looked awesome even prior to paint and chrome. The front Yamaha motorcycle wire wheels had been backed up with stainless steel discs and Honda Gold Wing brake calipers. The Morris axle was suspended by a simple and traditional transverse leaf spring pack. Taillights were picked up at a swap meet and the 10 x 15 Armstrong Pos-A-Traction tires established the mean look. The authentic looking Model T grille shell was fabricated by Bristol hot rod builder, Bob Wellstead, and farm tractor headlights were mounted on stanchions from Pete & Marts Rod & Custom Centre, who also provided the windshield posts. Note in the above photo that the tie rod is positioned about midway in terms of the grille shell height. That will help you in another reference to follow later. The 6-71 blower now rests on an Weiand intake manifold and Pip’s nicely curved homebrew headers are a distinctive addition. Ok, a guy doesn’t get a nickname like Pip because he’s tall and in this view Pip’s Low Blow is only slightly above knee-high, with the top of the chain link steering wheel just barely higher than the door on the body. Pip did an excellent job constructing a hinged fiberglass top to allow entry and exit with the windshield at a height that looks about a foot tall or less. And when you see Pip fairgrounds cruising in his T it becomes clear that doing so without the top is the most practical way to go. And that, my friends, is likely what led just a few short years later to a rebuild that left the original Pip Biddlecombe Low Blow T Bucket almost unrecognizable. Fast forward to the March, 1986 issue of Street Rodder magazine — and holy cow! I can only assume that Pip wanted to actually put in some road miles with Low Blow without being hassled by the Bobbies, bugs and other annoyances. Thus, the raised frame and seating position, tall T windshield and fenders front and rear. At this point, the Jag IRS had replaced the MK2 rear differential for a much more comfortable ride, no doubt at a more reasonable height. Now note the tie rod bisects the lower third of the grille shell, instead of mid-way, as a result of the raised suspension. Perhaps the biggest difference in apparent ride height was converting from the simple seat “pads” that were on either side of the driveshaft tunnel before to a conventional bench seat positioned on top of the tunnel. In keeping with that, the vertical steering column was lengthened, the chain link wheel ditched, and replaced by a Model T style wheel at a more appropriate height. Oh, and the candy apple red was replaced with black lacquer.

While personally I prefer the original in-the-weeds look of Pip Biddlecombe’s Low Blow T Bucket, I can certainly understand how hot rod preferences and tastes change over time to keep up with the owner. So, even forgetting it’s earlier identity Pip’s T is still quite a beauty. Wonder if it’s still around?

3 thoughts on “Pip Biddlecombe Low Blow T Bucket: Before, During and After”