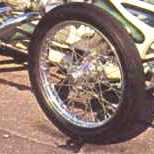 By the 1970s Fad-T era, front wire wheels were the norm for T-Buckets. I’m not talking Kelsey-Hayes wire wheels, but the skinny spindle mount 16 inch wire spoke wheels that were originally based on motorcycle rims. So, who was the trend-setting, first T-Bucket builder to employ spindle mount wire wheels? I’ve done some research on this subject over the years, bounced it off others on the HAMB, and now feel confident the cycle wheel trend setter award goes to none other than Ed “Big Daddy” Roth who first employed them on his “Outlaw“ sometime in 1960.

But, some might say that the Excaliber, later to be spell-corrected to Excalibur and then, after deciding few could neither spell nor pronounce that name, changed yet again to the Outlaw was not really a T-Bucket. However, it was Ed’s scratch-built crazy custom vision of a T-Bucket that began taking shape in 1957 and immediately upon completion was described as follows:

From the 1958 Fawcett How To book, “Griffith Borgeson on Hot Rods”:

An immortally-cherished body style among rodders is the Model T bucket. Trouble is, these early roadster bodies are very difficult to find today and, when they can be found, usually require extensive restoration.

Roth Studios have seized this crisis by both horns and conquered it by producing a do-it-yourself fiberglass T roadster body. The bucket, which includes firewall and instrument panel, comes primed for finish-painting and sells for $229. Floorboards are not included; their dimensions depend upon the amount of channeling used in each individual installation. Doors may be cut in the body (authentic T’s had only one) but Ed Roth does without them in his personal car which is pictured here. Roth does not sell duplicates of his T’s nose-piece, preferring to leave this detail to the builder’s individuality. Any standard radiator and shell, such as a T or Deuce, may be used or, following Roth’s example, you can mold your own from quick drying plaster (which Roth sells for $5 per 100 lbs.), take a glass female mold from the plaster and then cast the final front end in this mold.

The car shown here, just completed as we go to press, is one of Roth’s mobile advertisements, shows off his shop’s painting and striping artistry, plus the nerfing bars and clear taillight lenses that he markets. Roth build his own frame for the far-out T and Fritz Voigt built up the Cad engine. Front axle is ’37 V8 60, rest of running gear is ’48 Ford except for the Model A rear cross spring. The radiator is stock DKW, windshield frame is 1922 Dodge with blue-tinted glass. Rear axle, drive shaft and ’39 Ford trans are chromed.

Mounting and completely finishing the T body should take between two and three weeks, depending upon doors and requirements of individual chassis.

Roth now is completing a removable top for the body with gull-wing doors, a la Mercedes-Benz 300SL.

You’ll note in the circa 1958 pic above that the Outlaw is sporting steel wheels and hubcaps, which it still had when the upholstered and finished Outlaw appeared in the January 1960 Car Craft Magazine (remember that back then that magazine production lead times were three or four months or more). By July of 1960, though, Roth’s “weerdo” and other paraphernalia ad in Car Craft was offering 8×10 glossies of the Outlaw featuring spindle mount wire wheels for $2. It was this version of the Outlaw that appeared at the Hollywood Bowl car show in the 1960 photo below. So, more kudos are in order for the late BDR. If, however, you know of someone else who you feel might have claim to this title please comment and let us know.