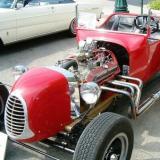 It’s probably no secret that I’m a fan of T-Buckets that are built on a budget. The reason why is that when liberal doses of creativity are used instead of dollars the result is often unique, personal and pleasing. (That’s also one reason why Chester Greenhalgh’s “How to Build a T-Bucket Roadster for Under $3000” is so popular). This little red track nosed T-Bucket is a great example of that phenomenon. While I’m pretty sure it’s a relatively recent build it evokes many nostalgic elements without having to employ what are now high dollar scarce, collectible parts. The nostalgic look starts at the front with the knee action shocks accenting the nice track nose grille shell. In the same vicinity are some neat little scoops on the front drum brakes that are intended to offer additional cooling as would have been used over 50 years ago. The unique “dual deuce” carb adapter is an economic way to get a distinctive nostalgic look without a huge outlay. In keeping with the track roadster theme, the aluminum paneled interior is an economic alternative to an upholstery job while also reinforcing the look of a car that may have at one time taken some hot laps on a local track. These are just the highlights. Take a look at the video I shot a couple years ago and see if you don’t agree that it’s a lot of functional and visual bang for the buck.

2 thoughts on “Why I Like This Track Nose T-Bucket”