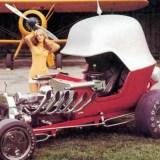 A lot has been written over the years about the Red Baron T-Bucket, and some recent developments have brought about some interesting new information I’d like to share. But, in case you just crawled out from under the proverbial rock, let’s start with some Red Baron hot rod history. It all began around 1968 when now-legendary designer Tom Daniel was asked by Monogram Models to do his second model car design. Seeking inspiration, he needed to look no further than around him at the Southern California surf and hot rod culture. At the time, surfers, as well as hot rodders and kids who just dug hot rods, were wearing reproduction World War I German helmets (many marketed by none other than Ed “Big Daddy” Roth) and Tom said to himself, “Hey, I bet that would fit nicely on a T-Bucket.” Tom designed the original model car kit with a 6 cylinder German aircraft engine and it was a quick hit with the youth culture of the day, selling more than two million units by 1973 (remember, without computers or video games and mostly only three TV channels at the time, model car building was the hot hobby). If the Red Baron wasn’t successful enough as a model car, in 1970 Mattel introduced the first of what would become many Hot Wheels versions of the Red Baron and many millions more have been sold, making the Red Baron likely the most popular T-Bucket ever. A year after the model car introduction, car show guru Bob Larivee worked together with Monogram to have Chuck Miller of Detroit’s Styline Customs build a life size version of Tom Daniel’s concept, which went on Larivee’s Promotions Inc. car show circuit starting in 1969, thus providing even more exposure. Not having easy access to an esoteric German aircraft engine, Chuck employed the new and exotic looking for the time 1968 Pontiac overhead cam 6 cylinder engine. For this and his many other accomplishments, Chuck Miller was awarded the coveted “Builder of the Year” title at the 2010 Detroit Autorama. You can learn more about the Red Baron and Chuck in his limited edition (1000 copies) biography, “Styline Customs: Chuck Miller” by Tony Swan. To find out how you can purchase this new book directly from Chuck, send an email to millerckpl@gmail.com. All of which brings us to the current news that a Red Baron replica is now listed for sale on eBay, with a starting bid of $14,000 (and 6 days to go). I believe it was previously listed in October, 2010, and evidently didn’t meet reserve then. You don’t have to be too eagle-eyed to notice that this particular Red Baron is powered by a big block Chevy rather than an OHC Pontiac 6. The story goes that due to its overwhelming popularity two more Red Baron replicas were produced by Jay Ohrberg, the original “Mr. Roadster” (a story for another day): one a V8 and the other a 6. It turns out that my legendary T-Bucket chassis builder friend, Ted Brown, did much of the construction on both of those Red Baron tribute cars. According to Ted, the V8 Red Baron build was a rush job because the completed car had to be put on a ship to be transported to an overseas car show in less than a month. As Ted relates the story, “I built most everything that was metal on the whole car: complete chassis and all running gear (except whatever is used for a rear end setup now in the car — I would never use a rear radius rod frame bracket that weak looking, even to be driven just on the street — it was originally a 4 bar setup). I used one of my complete front axles and spindles with top steering arms, used my tie-rods for the front 4 bar setup, because they were faster and cheaper to make than hairpin type radius rods). And that build got one of my prototype front springs; it was not yet taken to the spring shop to have tempered correctly for street driving (they did not have the time, they chromed all the pieces that were on the car over one weekend). So when Jay shipped it overseas to a car show, the spring went even flatter, it bent down in the center as a matter of fact.” Things were done in such a hurry, according to Ted, that “even the pedals that were seen were not hooked up to anything, no master cylinder or gas linkage. The car was not made to drive at that time, did not have a battery or any fuel tank or fuel lines or brake lines or any wiring. It was looks only.”

As for the big block Chevy engine, “That engine I sold to him also,” said Ted. “I had that engine, a 402 big block Chevy in my own T-Bucket for a few years and it ran great! Those were my special high valve covers also. (see photo above) That chrome radiator shell was actually a steel mockup I made to make a mold from, to make fiberglass T grille shells to sell in the same shape as the brass radiator on my T-Bucket. I also cut that big chrome Maltese cross design to fit into the radiator shell.” Ted added, “I built another Red Baron for him earlier, with a 6 cylinder Pontiac OHC engine, with wild megaphone headers.” “I designed all the extra goodies on those cars: headers, machine guns, gun sight for the radiator cap … lots of stuff you can’t see,” said Ted. In the photos of the 6 cylinder Red Baron construction above, you’ll note that Ted did the fabrication work around a pretty much unmodified fiberglass T-Bucket body, which was later replaced at Jay Ohrberg’s Hollywood Cars.

It’s great to have this opportunity to, hopefully, add some worthwhile information to the lore of such a famous T-Bucket. Feel free to share your own Red Baron story with us by commenting below.

6 thoughts on “Every Kid’s Dream: The Red Baron T-Bucket”