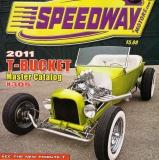 Maybe I just thought my post the other day was on the new Speedway Motors 2011 T-Bucket catalog. Because almost the next day look what arrives in the mail with a different cover officially labeled as the Speedway Motors 2011 Master Catalog. So, my apologies for not being able to keep up with Speedway’s incredibly prolific marketing department.

But, that doesn’t mean that any item with the 715 prefix was formerly a Total Performance part because Speedway uses that prefix on many of their T-Bucket products.

3 thoughts on “What? A Newer Speedway Motors 2011 T-Bucket Catalog!”