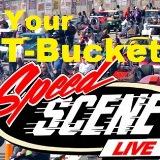 If you’d like to have a chance for a photo of your T-Bucket to be shown on a popular Internet TV show next week, don’t delay and send your pics before Monday, April 25, 2011, with your name so you can be credited, to Bob Beck at hotrodbob01@yahoo.com.

Bob Beck has a segment every week on a show called Speed Scene Live. He does the hot rodding part of the show.

“I would really like to have 20-30 pictures of T-buckets as I want to talk about the T-Bucket’s impact on the hot rodding scene after Norm Grabowski and Tommy Ivo’s cars hit the streets,” said Bob. “Photos can be sent to me directly. 3/4 front, rear and side views are best. People in the shot are fine. Models are even better. Each person that sends a picture we use will be listed on the show’s credits.”

According to Bob, “T-buckets are one of my favorite cars. Had one years ago, it was my first hotrod. Had a 215 Buick and 4 speed. Never was smart enough to hold on to it and take pics. It would have been a rat rod today, but was just an old unfinished car in the 70’s.”

Speed Scene Live is an online television show about all kinds of racing, drag racing, offroad, sprint, NASCAR, just about anything. You can watch their shows anytime on their archives page, just click and watch a show right over your own computer.

You can join them every Tuesday night at 6:00 Pacific/9:00 Eastern time at SpeedSceneLive.com to watch their live show. Speed Scene Live is always free and always available to watch anytime you want.

This is a great opportunity for us all to spread the word about the fun world of T-Buckets, so get your pics off to Bob right away.