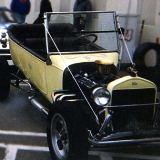 This yellow T-Tub was stolen on March 28, 2011, from the owner’s driveway in Brentwood, CA. (That’s the city of Brentwood in the East Bay region of the San Francisco Bay Area, not the upscale neighborhood in L.A.) This car has been in the owner’s family for a long time and is of great sentimental value and a nice reward is offered for its safe return. This is a pretty unique appearing car because it’s a touring body, or phaeton, version of a T-Bucket. It also has several features that are similar to those on the popular Andy’s Instant T kit cars that were built by Andy Brizio at his shop in South San Francisco in the late 60s and early 70s. In the late 60’s Andy introduced his first Tub-T which was based on a Steve Archer fiberglass body. On this particular car, you’ll notice the distinctive rear door outlines, which differentiate it from most stretched T-Bucket bodies. The car has a small block Chevy engine and you’ll note it also features the unique Brizio-style mounting of the headlights and shocks. According to the owner, however, it was not an Andy’s Instant T and it’s quite likely that since it was also built in Northern California that they tend to share various features. So, if you encounter anyone trying to sell this Tub-T or what might appear to be parts from it, please contact the owner, Ed DeVincenzi, at 650-619-2867.