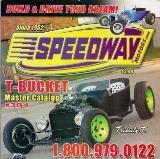 “Why have T-Buckets been so popular for so long? Because they’re simple, affordable and, best of all, FUN! You really don’t drive a T-Bucket — you hop in and pilot it like a four-wheeled motorcycle!” That quote from the Speedway Motors 2011 T-Bucket catalog sums it up nicely.

It was less than a year ago that we told you about the release of the 2010 Speedway Motors T-Bucket Catalog, and we’re happy to report that the new 2011 edition is now available. Of course, the big addition and star of the catalog is the new Speedway Motors Tribute T, that we reported on last year.

The new T-Bucket catalog is 152 pages, 16 more than the 2010 edition. One little thing I noticed is that Speedway’s stepped it up in the T-Bucket apparel department. Since Summer’s upon us, I thought it would be cool to highlight a few of Speedway’s T-Bucket t-shirt offerings. So, if you haven’t already you can get your free T-Bucket catalog at the Speedway website.