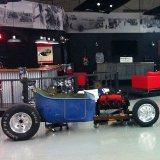 So, I’m casually looking at a David Freiburger Facebook update about how Hot Rod magazine’s Hemi Dodge Super Bee “Crusher” project car is only 60 hours away from driving to Las Vegas for Moparty at the Strip. Then, I see this pic of how busy the HRM shop is in that final thrash and all of a sudden it’s whoa! — what do I see in the corner? A T-Bucket mockup! And then, a close up picture with the caption, “The next Hot Rod project car.” OK, I’m renewing my sub for sure now. As for the details, that’s still to come. However, “It won’t have those wheels and tires and probably not a small Chevy, either. Just mocking it up for bench racing,” Dave commented. A year ago, I speculated there might be a Rod & Custom magazine T-Bucket project. Can’t be right all the time, but at least it’s in the same family. Will look forward with much interest to this project.