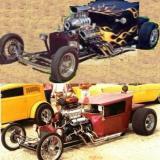 As noted in an earlier post, I first became fascinated with Pip Biddlecombe’s “Low Blow” T-Bucket Roadster when surfing the web a few years ago. Later, I saw pictures of what I believed to be the same car, but with a change to black paint and a flame job that in my mind might have happened after it made its way to the States. I’ll admit that, at the time, I was so fascinated by the profile(s) that I didn’t notice one was Poncho-powered and the other was Hemified — after all, they were both blown! So, after noticing pictures of the flamed “Low Blow” next to Skip’s “Perfect” T-Bucket, I sent him a message asking if he knew who the current owner of Pip Biddlecombe’s “Low Blow” was. Imagine my surprise when Skip responded, “Who’s Pip Biddlecombe? Scott Ellis built ‘Low Blow’ and still owns it.”

Little did Scott Ellis know when he started laying out the original Low Blow T-Bucket on his Fresno garage floor in the 1970s that a decade later and 5,000 miles away another hot rodder would be so inspired as to create his own “Low Blow” vision. Of course, there are plenty of creative differences between the two T’s, with Pip utilizing a Jag independent rear suspension and the more dainty Hallcraft-style wire wheels and with Scott employing heaps more power and that nicely widened body to accommodate it all. Personally, I’m a big fan of low-slung T-Buckets and love both of these flip-top beauties. Stay tuned, though, because there were some notable high-power, low profile T-Buckets created yet another decade earlier and we’ll cover those as well. What’s your favorite low-slung T-Bucket? Let us know by commenting below.